Everyone knows what debt is — and many have dealt with it first-hand. But there are a few misconceptions Americans have regarding debt that could be harmful in certain scenarios. Srinivas Thiruvada...

Everyone knows what debt is — and many have dealt with it first-hand. But there are a few misconceptions Americans have regarding debt that could be harmful in certain scenarios.

Srinivas Thiruvadanthai director of research at the Jerome Levy Forecasting Center, highlighted some debt misperceptions that many Americans have in an interview with Yahoo! Finance: 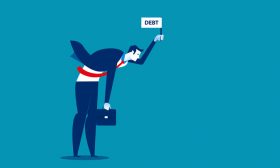 According to Thiruvadanthai, "There is no connection between high debt and economic growth – at all.”

The big factors that cause debt are wars and economic depression. In reality, economic weakness leads to debt — as opposed to the other way around.

Your Children and Grandchildren will Pick up The Debt Bill

Many people worry that their debt tab will fall on the shoulders of the next generation of family members. Thiruvadanthai states that future debt payments will actually be paid with future wide-scale economic activity.

Programs like Social Security and Medicare are set up to be pay-as-you-go, so there is nothing people can do today that will change the outcome of the future. Basically, there is no true way of predicting the current governmental actions in relation to how it will affect your children's future.

The big misconception here is that public debt is tied to future inflation. If you take a look at the history of other nations with public debt such as the U.K. and Japan, you will see that when they had a high inflation rate the public debt was lower.

It seems that Americans are in a panic when it comes to issue of economic debt. Bloomberg issued a poll finding that 71% of Americans say the economy is in recession and that they are conflicted on what actions to take to fix it.