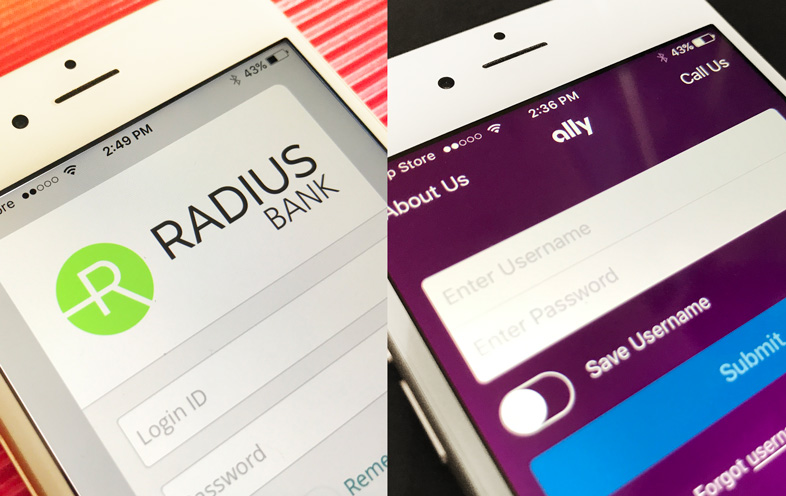 Radius Hybrid was designed with the idea of being the sole account that would take care of your checking and savings needs, so you could technically use the account strictly for just checking or just savings. But, it is just much smarter to use it for both. Going forward, I'll refer to it as a checking account, but just remember that was created as a hybrid account.

For these two online checking accounts, I reviewed the following key factors:

Neither checking account charges a monthly fee. For many people who struggle with avoiding the monthly fees on typical checking accounts from big banks, this may already be a win. Fortunately, it doesn’t stop there -- these online checking accounts offer much more. Just rest well knowing that you don’t have to jump through hurdles to avoid a fee.
Winner (Monthly fee): Tied

Ally’s checking APY rate isn’t too attractive for balances under $15,000 (which is more than I would keep in a checking account). For balances of at least $15,000, however, the interest rate is much more respectable APY.

Radius Hybrid offers an interest rate policy: only the portion of your account balance that is more than $2,500 will earn an attractive APY. Therefore, the best way to maximize this rate is to have a large account balance.

At the $15,000 rate tier for Ally’s checking account, Radius Hybrid will provide an effective APY, which is higher than Ally’s APY. I’m going to have to give this one to Radius Hybrid
Winner (Interest rates): Radius Hybrid

Access to ATMs is` critical to people who use online banks -- it’s their only way of getting cash. Luckily, both online checking accounts offer the best level of ATM accessibility you could ask for: use any ATM in the country for free because they’ll refund all ATM fees paid out of your pocket.

Although cash deposits may not be frequent transactions, it’s nice to know that you have it hand, which is why Radius Hybrid takes the edge in this category.
Winner (ATM access): Radius Bank

Overdraft fees are some of the most expensive fees that you can pay when using a checking account. According to MyBankTracker research, the average overdraft fee at the top 10 U.S. banks is $35.20.

Ally Bank is already a great deal with an overdraft fee of $9. And, if you link the account to another Ally account to cover the missing funds, there is no overdraft protection transfer fee.

Radius Bank also has no overdraft protection transfer fee when using a linked Radius account, but its overdraft fee is an alarming $33. The bank makes up for that pricey fee by offering an overdraft line of credit, which essentially means that you borrow the overdrawn amount for a little bit of interest.

I called customer service and found that the interest rate on the overdraft line of credit is 17.99%. It may sound scary, but it is still much cheaper than a $33 overdraft fee -- a $100 overdrawn amount will cost just $1.50 in interest after 30 days.

The overdraft line of credit is an attractive feature, compared to a flat overdraft fee, so Radius Hybrid is better with regards to overdraft policies.
Winner (Overdraft policy): Radius Bank

Without physical branches, online and mobile banking are the lifelines for online bank customers. Mobile banking takes precedence not only because of the rising adoption of smartphones but also because mobile banking apps are getting more and more capabilities to simplify account management.

<p>Ally's customer service is HORRIBLE. They might be available 24/7 but I have yet to speak to a competent human being. I have spent more time on the phone with Ally reps in the past 8 months than I spent in physical banks in the past 10 years.</p><p>They are simply incompetent in handling basic issues.</p>

<p>Note that this statement about Radius is no longer true: "only the portion of your account balance that is more than $2,500 will earn an attractive APY." Here was their announcement: "As of Wednesday, November 1, 2017, you'll now earn 0.85% APY on your entire balance when you keep a balance of $2,500 or more. Before, you would only start to earn interest on the portion of your balance $2,500.00 and up."</p>

<p>If this article was written July 17th, 2017 then how come it says Radius has no person to person transfers? In fact, Radius has better person to person transfers than Ally because with some banks Radius transfers go through instantly. Also, Aspiration offers the best version of the Radius Hybrid account with a 1.00% APY that is earned on the entire balance once the balance is $2,500 or more (instead of just the portion over $2,500 like Radius does) I'm sure there's a reason why Aspiration has the better account but regardless it can still be free (Aspiration allows you to choose what you want to pay them monthly between $0-$10 and yes it can be $0).</p>

<p>Aspiration is their own company offering their own banking. However Aspiration's account is backed by Radius, and essentially Aspiration is just wrapped over the Radius account as I understand it.</p>