One key to last-minute retirement planning is to accept that you need to change your finance habits. Your way hasn’t worked. Whatever it was that you had hoped would happen (Publishers Clearing Ho... 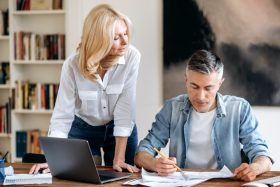 One key to last-minute retirement planning is to accept that you need to change your finance habits.

Your way hasn’t worked. Whatever it was that you had hoped would happen (Publishers Clearing House? the Lottery? A new job at triple your salary?), hasn’t happened.

So it’s time to stop acting as if a solution was about to arrive -- in Deus ex machina fashion -- at the last possible minute.

This is the last possible minute. And help is not on the way.

But by changing four areas of your financial life now, you can build your own solution.

Here’s what has to change:

1. The idea of retiring before 70 -- We wrote about this extensively in the article on practice retirement, but it’s worth mentioning here again.

But look … don’t kid yourself. Working through your late 60s (or beyond) won’t be easy. You’re going to be the old person in a world of rapidly changing technology.

Here’s a guide on how to do that.

2. The idea that you can’t save -- Whether you’re 53 or 63, odds are you’re interested in last-minute retirement planning because you’ve been telling yourself forever that you just can’t save the way other folks can.

Unless you’re living in abject poverty, collecting soda cans to raise enough money to eat, you can save something.

And when it’s late in the game, every penny you save counts.

3. Being in debt -- Nothing hurts retirement planning (and finances in general) more than debt.

If you owe money on your credit cards, pay them now. Do whatever it takes.

If you’re committed to last-minute retirement planning than accept that those monthly credit card bills are your enemy.

Those bills want you to starve. They want you to be one of those elderly people living on cat food in a roach-infested apartment in the worst slum in America.

If you’re 55 or older, have no savings for retirement, and have credit-card debt, you are courting disaster.

Cut up the cards. Start selling things to pay off your debt -- clothes, furniture, old books, whatever. Get that debt down to zero, and use the extra money every month to invest.

If your debt is such that you truly can’t imagine paying it off quickly, then it’s time to consider not paying it at all.

Talk to an accountant and a lawyer and think seriously about bankruptcy. If it’s pride that’s holding you back, it’s time to ask yourself the following:

Which of these is the least troubling to you:

a. ) asking a bankruptcy judge for help now?
b)  waiting 15 more years and then asking your children to spend less on your grandchildren so they can help you pay for groceries?
c) deciding not to trouble the judge or your family, and spending your golden years begging for change on the street?

Don’t think it will get that bad? Consider this: Some 3.5 million senior citizens live in poverty in the United States.

4. Giving money to adult children -- This is a terrible time to be starting out as an adult. You’ll get no argument from us on that.

But nothing -- nothing -- is more dangerous for someone who hasn’t saved adequately for retirement than to take on debt to help their adult children.

One particularly bad move is to co-sign for student loans. And as college has grown more expensive and the economy has grown weaker, an increasing number of older Americans have opted to make exactly that bad move.

The results are nightmarish.

In August 2012, in response to questions from SmartMoney, the IRS admitted it was reducing Social Security payments to 115,000 senior citizens who owed student loans.

Some of those folks were behind on their own loans -- still struggling after decades to pay down their debts. But many of them owe money on loans they co-signed for their kids

If your adult children are in financial trouble, you have an obligation to help. You want to help. And you can. But don’t give up cash that you should be saving for retirement and don’t ever, ever co-sign a loan.

Let them move back home. Pool your resources and cut your costs together.

But don’t make a move that could ruin you all for decades to come.

About the author Paul Conley
Paul is the editor of MyBankTracker. His columns cover the money movement -- the ongoing shift in how people, businesses and our culture look at finance.
https://www.mybanktracker.com
Add a comment