How to Spot a Counterfeit Bill

Artificial money that passes as the real deal can fool anyone who doesn't know what to look for. With the recent changes to the hundred dollar bill, printing counterfeit money probably became more... 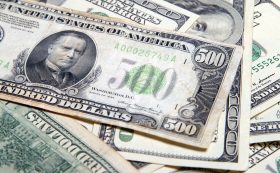 Artificial money that passes as the real deal can fool anyone who doesn't know what to look for. With the recent changes to the hundred dollar bill, printing counterfeit money probably became more difficult. However, it doesn't completely stop fraudsters from trying -- bills, cashier's checks, and money orders are forged in an attempt to steal money.

People who lack the knowledge of what to look out for may fall victim to these tricks. To reduce the likelihood that you'll fall for a fake bill, cashier's check, or money order, learn how thieves attempt to get away with making fraudulent money.

Bills are the easiest forms of fraudulent money to fall for. Although criminals typically forge larger bills such as $100, $50, and $20 they still create fake lower amounts as well. One of the best ways to determine if a bill is real or not is to feel the coat of the president or person on the bill. On legitimate paper bills, the coat has ridges. Fake paper is smooth on these areas because it is hard to mimic the ridged texture of the coat. That is one of the first signs that a paper bill is fake.

Note the watermark of Benjamin Franklin, this is known as the portrait water mark

An embedded security thread is another highly advanced security feature that is only found on real bills. For example, by placing a $100 bill under a UV light, a pink strip will appear on the left hand side.

Real bills have a color strip that is visible only when a UV light is applied to them.

The strip can be viewed on both sides. Here is where the strips are located on real bills:

Color shifting ink is another feature available in $100 bills that allows you to tell the real ones from counterfeit. Look on the lower right corner -- by tilting the note back and forth you should see the color of the number 100 shift from copper to green.

One common method that is used by counterfeiters is to take a smaller bill and convert is into a higher one. For instance, a $5 bill might be changed to a $100 bill. When held up to the light, you should see a silhouette, but a different face will appear than what is supposed to be on the silhouette. That is another indicator that the bill is fake.