Next Up, Roth and Traditional IRAs

Roth and Traditional IRAs are meant to be used as retirement saving vehicles, and each offer tax benefits. Here are ways to make distributions from both. 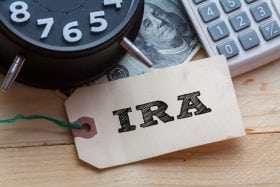 Roth and Traditional IRAs are meant to be used as retirement saving vehicles, and like 401(k)s, come with tax advantages. With both account types, your money grows, tax-free. There are a few instances in which withdrawing a distribution early might be qualified, such as an instance of death or disability, unemployment, or a first-time home purchase.

However, withdrawing early will take away the tax benefits on your funds, and usually will come with a penalty. Here are the rules on making withdrawals from both Roth and Traditional IRAs...

Roth IRA: With both IRA types, you'll have to pay income taxes on the money being housed. However, with a Roth IRA, you'll pay the taxes when you deposit the money in your plan, and never pay additional taxes when withdrawing funds later on.

You may begin taking qualified distributions when it has been at least five years since you first began contributing to the account, and if you meet one of the following conditions:

When it comes to making withdrawals, account holders are able to withdraw their contributions without incurring any penalty fees. However, the IRS does penalize those who withdraw their investment earnings before the age of 59 1/2, so if you contributed $50,000 to your IRA and it grew to  $100,000 and withdrew $60,000, you would get taxed for $10,000 of that distribution.

Traditional IRA: With traditional IRAs, an individual does not pay taxes on assets contributed to their account, but pays for taxes when they withdraw from their savings.

The upside to this is that later on, individuals are most likely going to be in a lower tax bracket, and can avoid paying higher taxes by having their contributions be tax deferred until retirement.

There is a 10% penalty charged to account owners who withdraw early, as well as applicable state and federal taxes. Instances in which early withdrawals may be deemed qualified and penalty-free include the following:

About the author Katherine Muniz
Katherine covers the issues that are most relevant to younger adults, including topics such as college finances, student debt, and consumer spending. She has contributed to other web publications such as Business Insider and Investopedia.
https://www.mybanktracker.com/member/KatherineMuniz
Add a comment