How a Single Mom Bought a House 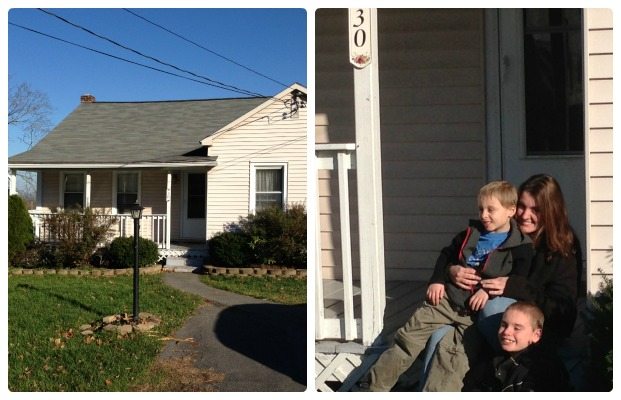 In the summer of 2008, when my children were 2 and 5 years old, the three of us set out on a new adventure.  The house was my ex-husbands’ home (and he sure didn’t let me forget it!), and that meant the kids, and I were the ones to move out. We stored our belongings in my parent’s garage, set up the toddler bed in my old childhood bedroom next to the twin bed I grew up in; and I quickly set up my desktop computer on the filing cabinet next to my parents computer – so I could get some work done while figuring out what to do next.

Like many young families, my ex and I had lived paycheck to paycheck.  I had only a few hundred dollars in my Paypal account, and if stress could be bottled and used productively, I’m certain I could have powered an entire country with the amount of stress I was under.

We found a great apartment in town.  I didn’t have enough to pay the security deposit, and the landlord was openly apprehensive about renting to a single mom who listed “freelance writer” as her source of income – so my aunt stepped forward with a check and smooth-talked him into giving me a one year lease.

We loved this apartment.  It was a 3-bedroom duplex with a garage, basement, and a backyard.  It was in a nice area, in the school district I wanted, and on a quiet, dead end street.  For over two years, we lived happily ever after as tenants.  Every month when I wrote the rent check for $985, I cringed because this was almost as much as we had been paying for a mortgage at our last place.

No More Happily Ever After

Somewhere between the second and third year, a new family moved into the other half of the duplex, and the happy days came to an abrupt end!  The parents of the new family fought constantly, using words I didn’t really want my children to hear, heck – using words I didn’t really want to hear!  Their three to five children (depending on what day of week it was) were given free reign around town and were often found inside my garage, in my yard, ringing our door bell at all hours, and throwing things at my kids’ bedroom windows.  The landlord was contacted by everyone on the street – but claimed there wasn’t anything he could do as the family had a lease and were paying their rent.  It was time to move on.

I knew that if we continued to rent, we would always face challenges of other tenants.  There wasn’t much you could do when you didn’t own the property you lived on.  Plus, in the back of my mind, I hated the feeling I was giving away almost $1,000 a month – and unless I wanted to live in an undesirable area that was the typical rent I could expect to pay here.

I started researching first-time homebuyer programs, and discovered the Affordable Housing Partnership of the Capital Region of upstate New York.  I attended homebuyer education workshops and credit-counseling sessions – all free – which helped me get my debt and spending under control.  When I eliminated all of my excess and unnecessary spending, I was able to find a couple hundred dollars after my expenses were paid to save every single month.  I did not think I had money to save, so this was an eye-opening discovery!  We did have to go without a lot of things that had become expected – I canceled cable television, we stopped getting take-out and eating in restaurants, I told the kids “no” much more often when they asked for things that would cost money.  I knew it was only temporary, as once my debts were paid off and we had money saved – we could slowly add back in some of those conveniences and luxuries.

I learned a first-time homebuyer did not necessarily need to have a 20% down payment; and that many of the banks would allow as little as 3% down, as long as your income was enough to support your ongoing mortgage and living expenses.  On a $150,000 house, I would be looking at a down payment of about $4,500 – and this made the dream of owning a house seem achievable to me.

I opened a matched savings account for first-time homebuyers suggested through the Affordable Housing Partnership – which would quadruple my savings with free money under this program, to be used toward a down payment, up to $7,500.  There were a few different banks offering the first-time homebuyer savings club, so I did my research by comparing savings accounts to find the best one for my situation.  The “catch” was you had to use that same bank for your mortgage when the time came, so I wanted to make sure I chose appropriately from the start.

A few months into the savings plan, my aunt happened to see a house for sale by an owner in the general location in which I wanted to live.  It wasn’t time to start house hunting yet, since I still had several months to save to get the full matched savings under the first-time homebuyer club, but she said the house was so perfect I should just go look at it anyway.  I didn’t want to look at houses that may not be available when I finished my savings plan, since I would just be disappointed - but against my better judgment, I took a look and she was right!  This was a perfect house, within my target price range, and in the exact location, I wanted to live.  I was in love and easily pictured my little family living in this house.

I first tried to convince the homeowner to let me rent his house until I completed the savings program – for about six months – so that I wouldn’t lose the matched savings.  He was uncomfortable with that idea, and besides, he needed the money he would make on the sale of the house to buy his new house.  I told him I didn’t want to give up that kind of “free money” and wished him luck selling his house.

A couple weeks went by, and I figured I would never find a house as perfect as this one when my time came- but the home seller called me back!  He asked me if I was still interested in the house and offered a discounted price.  He had found a new house and was ready to move – but their ability to buy a new house would be tied to their ability to sell their existing house. He was willing to lower his original asking price by about $15,000 – and since this was more than I would have received through the savings match program, I decided to go look at the house again and see how I felt.

Sure enough - I loved it even more than I had the first time around.  By this time I had saved a couple thousand dollars living extremely frugally and focusing my efforts on growing the savings.  I had also just finished a large freelance writing project that generated another $4,900 of income above and beyond my normal income – the timing was perfect!  This money went directly to my savings account, too.

I didn’t know if I would even get approved for a mortgage before completing the matched savings program.  The idea was that people who don’t necessarily look like the ideal homebuyer can prove their credit worthiness through showing financial discipline in the matched savings program - saving the amount you said you would save over a specific period of time.  Plus, you take several financial education courses through the Affordable Home Mortgage Program in order to improve your knowledge and money management ability.

Not being one to be overly patient – I decided to try to get pre-approved before the program was finished so I could make an offer on the house.  I could continue saving in the program in case I was denied – and then try again when I completed the program as planned, so I figured I had nothing to lose.  If I was approved, I would be giving up the matched savings portion of the account – but none of the money I physically contributed would be lost and I could withdraw it whenever I wanted without penalty.

I contacted the same bank I held the matched savings program with and went through the pre-approval process of showing my income and expenses and then waited.  I did have to jump through a few hoops for showing proof of income and documentation, since I have been self-employed for nine years.  I was pre-approved for the amount I needed to buy the house – despite being a single parent, despite not having completed the full savings match program, and despite having an average, middle class income.

Making the Offer and Closing the Deal

Once approved, I made the offer on the home (I offered $20,000 below his original asking price, knowing the seller was motivated to sell).  It was accepted!  I had the house inspected and when everything turned out reasonable – we proceeded with the rest of the bank paperwork to complete the sale.  The mortgage I have is through M&T Bank, and their first-time homebuyer options included the ability for a “seller concession”.  This was money that is added on to the total mortgage amount, and then given back to the buyer at closing to help cover closing costs.  I ended up receiving $7,000 through seller concessions at closing and my total expenses – including my lawyer, down payment, and fees due at closing was under $3,000.

While it was certainly a trying time, all in all the process of buying a home as a single mother with an inconsistent income was well worth the struggle. I feel I have learned so much through the process and undoubtedly feel more secure and have more freedom in being a homeowner as opposed to a renter. I am glad not to have to go through the process again in the future, but it is certainly helpful knowing there are options available for first-time homebuyers if people would take the time to explore them properly.

About the author Debbie Dragon
Debbie is a writer who specializes in parental finances, credit cards, and mortgages.

<p>GREAT! Thanks!! I'm a single mum in Australia believing for the same thing! You've given a wealth of things to research here in Oz. great work!! And congratulations!!!!</p>