How to Cash in U.S. Savings Bonds and Report Taxes on Interest Earned

Learn how to cash in your U.S. savings bonds, whether paper or electronically, and report taxes interest earnings properly. 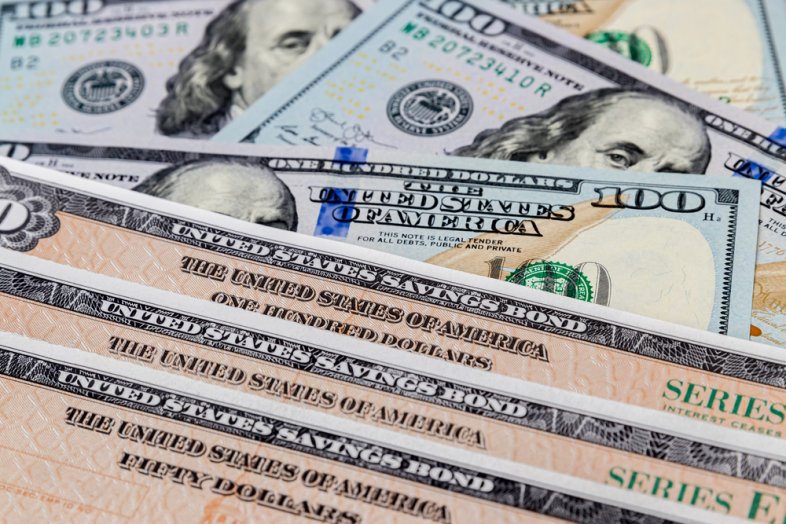 Cashing in a U.S. savings bond can feel a little like winning the lottery or finding a lost treasure, especially if you’ve just discovered the savings bonds or had forgotten about them.

That is, it can feel like a windfall of cash – until, that is, you realize you need to report taxes on the interest earned.

Still, while the tax part may not be loads of fun, it’s always nice to end up with some unexpected cash.

Newly-issued paper U.S. savings bonds are uncommon. But, you may have inherited them or purchased them a long time ago.

Find out where to cash out U.S. savings bonds that were issued on paper or electronically, and how to report it on your taxes.

Cash In Paper Bonds at Your Local Bank or Credit Union

So if you have found some paper savings bonds in a chest of drawers, or you were given them in an inheritance, or however you came to have them, you can take them to any bank or credit union.

If you have Series EE and Series I bonds, your bank should be able to cash them right there.

You need to bring the paper savings bonds (kind of obvious, but figured we’d mention it), your driver’s license or some other proof of identity and – if you were named as a beneficiary – a certified death certificate. You can find more information at the Treasury’s website.

If you have HH bonds, you won’t be able to cash them at the bank, but going to your bank or credit union is still a good idea.

Your bank or credit union can certify or guarantee your signature on FS Form 1522 – and then send that form and the bonds and any other documents to Treasury Retail Securities Services.

You will then get paid for those HH bonds through direct deposit.

Cash In Your Bonds Online Via the Treasury

Of course, maybe you have electronic bonds, and you’ve been thinking that now would be a good time to cash them. If that’s the case, you will do it at Treasury.gov.

There are three reasons you would cash your EE, E or I bonds.

As for how to cash your electronic U.S. savings bonds, you’ll need to set up an account at Treasury.gov. Once you do that, click on the “current holdings” tab, and you’ll see how much money you have.

If you want to leave some money in there (maybe the bonds haven’t fully matured, and you’d like to keep earning some interest), leave at least $25 in the account. (If you have paper bonds, incidentally, and you cash them, you need to take out all of the cash.)

You’ll receive your money in your checking or savings account within two business days of the redemption date.

So you’ll want to be aware of a few things when it comes to cash out your U.S. savings bonds – and taxes.

You will have to pay federal income tax on your savings bonds, but you won’t have to give any of the money to the state or your municipality.

You may have to pay federal estate, gift or excise taxes or state estate or inheritance taxes.

You’ll also be happy to know that you might avoid federal income tax if you use the money from the U.S. savings bonds to pay for higher education.

That is a big reason, in fact, why people invest in U.S. savings bonds.

If you plan on having children, you could put a sizeable amount of money into savings bonds, and in 20 years, have it doubled, just about the time your kid or kids go off to college – and then you simply use the money to pay for college – and you won’t pay any taxes at all.

How to report interest earnings

If you’re collecting interest every year on your U.S. savings bonds, you can report it every year. But no need to panic.

If these are savings bonds you just discovered in the back of a drawer, you can also put off reporting the interest until you file a federal income tax return for the year that you redeem the bond for cash. Most people go that route, according to the Treasury website.

And you may not need to worry about reporting the interest. Or if you buy bonds, someday you probably won’t need to concern yourself with reporting.

That’s because electronic EE bonds in a TreasuryDirect account are automatically redeemed, and the interest is reported to the IRS, once those bonds stop earning interest.

Once you have cashed the savings bond, the IRS will send you a 1099-INT form, which will have the amount of money you redeemed the bonds for, and you’ll have that to use when you file your tax return.

If this all sounds complicated, you can simply hand the 1099-INT form to your tax preparer. And on the bright side, once you cash in your U.S. savings bonds, you can probably afford to hire a pretty good tax preparer.

Plenty of people go through their entire lives without investing in them or even thinking about bonds.

You probably learned about U.S. savings bonds somewhere in a government or economics class, but if those days are behind you, you may need a quick tutorial.

When you invest in bonds, you’re not really investing in a physical piece of money.

A bond is really a contract or an agreement. You could call it an IOU. Some of the bonds out there include municipal bonds, corporate bonds, and treasury bonds.

Bonds nowadays are mostly in electronic form, but until 2012, bonds were also often paper – and, of course, there was a time when the bonds were always written on paper.

A U.S. savings bond is a treasury bond. It is considered the least risky bond you can put your money into.

There are four different types of U.S. savings bonds:

These pay a fixed rate of interest, which apply for the 30-year life of each bond.

These are the same types of bonds as EE. They were sold before EE bonds came about in May 2005.)

These also pay interest – a fixed rate that is announced when the bonds are issued and a second rate that is equal to the level of inflation. The interest is compounded semiannually.

They also will earn interest for 30 years, though you can redeem them much sooner than that, if you want. You can also buy Series I bonds in the form of paper (but you can’t buy paper EE bonds).

These are no longer issued – they stopped in 2004 – they weren’t that popular. But they reach final maturity in 2024, and so if a grandparent, for instance, bought you some years ago, you certainly might have these to cash in.

EE bonds and I bonds seem pretty similar. What are the differences, and which is better?

They are very alike, practically twins.

Well, it’s guaranteed that with EE bonds, you’ll at least double your return in 20 years. Series I bonds don’t have that guarantee, though the hope is that they’ll double or more.

Still, if inflation is low for 20 or 30 years, you may not do all that well compared to EE bonds.

It's your call, as to what you want to invest in.

You will get paid back.

If something happened where you were not paid back, the argument often goes, the United States (and presumably the rest of the world) has probably been enslaved by aliens from another planet.

You wouldn’t want to put all of your money into bonds. They’re considered a safe investment but maybe too safe. Long-term government bonds historically earn around 5 to maybe 6 percent in annual returns; stocks tend to earn around 10 percent.