How to Handle a Tax Bill That You Cannot Afford

Find out why you owe so much in taxes this year. Learn what you can do to address a tax bill that you can't afford to pay off immediately. Understand what happens when you do not clear this debt with the IRS. 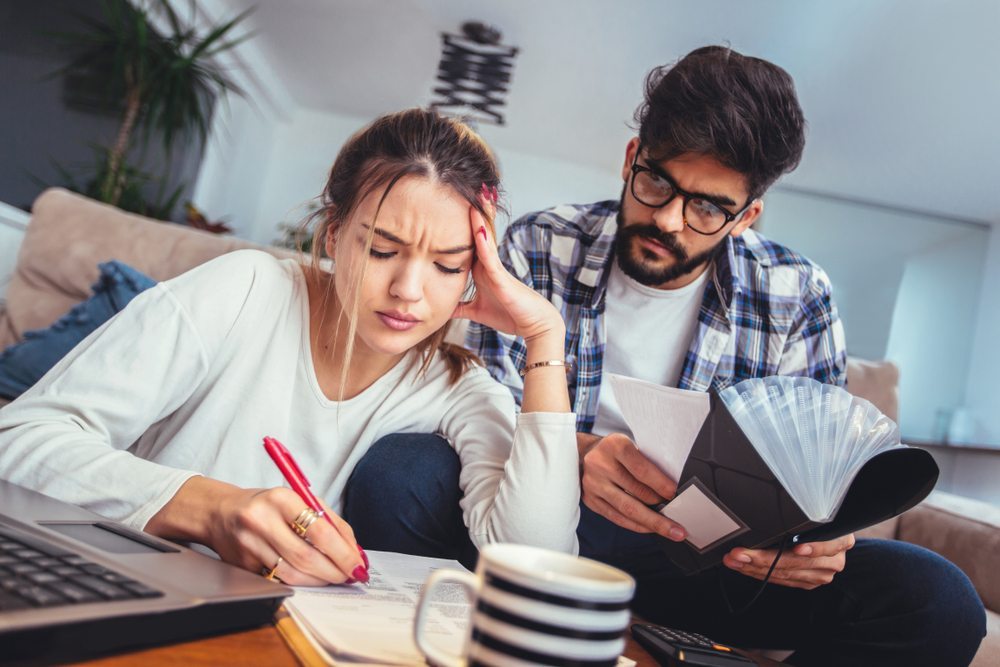 Whether you’ve prepared your tax return already or just getting around to it, you realize you’re not going to get a tax return because you owe taxes this year.

It’s probably not that big a deal if it’s just a few bucks, or even a few hundred, but what if it’s several thousand dollars?

And what do you when, after looking at your finances, it becomes evident that you won’t have enough money on hand to pay Uncle Sam (aka the IRS)?

Worse yet, what are the repercussions if you ignore paying that $20,000 tax bill?

Learn how it happened and what you can do about it.

You owe a boatload of taxes this year.

The income taxes you owe each year are based on your income, so the simple reason is that you didn’t pay enough taxes according to the amount of money you earned.

Second, understand the reason(s) why this might be the case:

You didn’t withhold enough from your paycheck

If you’re a salaried worker, you’ll have filled out a W-4 upon hire, the form allowing you to declare more or less money withheld from your paycheck.

If you designate more money withheld, the more taxes you pay up front, and the less money you take home, but the fewer taxes you’ll owe at the end of the year. (That usually means a tax refund.)

But if you declare less money withheld, more of your paycheck goes in your pocket every payday, and you’ll pay fewer taxes up front, but you’ll end up owing the rest come tax season -- just one reason why you might owe more than you anticipated.

Many freelancers learn this lesson early on.

Contract pay may seem lucrative when you’re paid, but it’s easy to forget that your income is gross pay, pre-tax, not net pay after taxes have been deducted.

It’s up to you to budget for paying taxes out of those earnings.

If not, you could end up owing more than you can afford.

Independent contractors may also not realize that self-employment taxes may apply, raising your tax obligation.

Alterations to the tax code, a change in dependents, marital or household status, or even a mortgage refinance -- which can affect your tax deductions -- can all result in you owing the IRS more than you expected.

8 Tips to Get Your Taxes Paid

If you can’t afford to pay your taxes all at once, don’t panic!

1. File on time and pay your tax bill partially

Regardless of whether you pay your taxes or not, a good deal of penalties and fees get charged when you don’t file them.

Above all else, make sure to file your tax return. Then, pay as much as you can afford now.

You’ll have 30 to 60 days before the IRS follows up with you about the remaining balance, so pay as much as you can during that time, even if it’s just a few dollars here and there.

Note: Even if you’ve partially paid your tax bill, a Failure to Pay penalty will continue to accrue at 0.5 percent of your tax owed, per month, until it’s completely paid off.

If you owe less than $50,000 in taxes, you can apply for an online payment plan with the IRS.

There are some nominal fees attached to the plan, but the good part is that because it’s a formal installment agreement with the IRS, you won’t have to worry about an adverse action taken against you for paying piecemeal.

Interest rates on IRS installment agreements are also lower than credit cards, in most cases.

“Under the Internal Revenue Code, the rate of interest is determined on a quarterly basis,” says CPA and attorney Brian J. Thompson. “For taxpayers other than corporations, the overpayment and underpayment rate is the federal short-term rate plus 3 percentage points.”

To request a payment plan, you can apply online here, or by filling out Form 9465.

3. Ask for a short-term payment extension

If you can’t afford the full amount now, the IRS will grant you up to 120 days (four months) to pay.

“It’s not a formal payment option, so there’s no application and no fee,” says tax attorney Stephen A. Weisberg. “But,” he notes, “interest and any penalties will continue to accrue until the tax debt is paid in full.”

4. Apply for an ‘Offer in Compromise’

Explains Weisberg, “An Offer in Compromise allows you to pay less than the full amount you owe based upon a specific formula, taking into account your income, expenses, assets, among other financial considerations.”

Sort of like an income-driven repayment plan, it’s also called a partial pay installment agreement, where the IRS will accept what you can reasonably afford even if it’s not the full amount you owe.

In order for the IRS to consider you for an Offer in Compromise, you’ll need to submit an application (Form 433-A, “Collection Information Statement for Wage Earners and Self-Employed Individuals”).

You can request ‘Currently Not Collectible,’ or CNC status, if you can prove that you can’t pay your taxes and your reasonable living expenses at the same time.

“The IRS will not seek to collect payment from you while your account is in Currently Not Collectible status, but the debt does not go away, and penalties and interest will continue to grow,” says Weisberg.

Keep in mind that if your account is placed in CNC status, the IRS may frequently check to see if your income has improved to determine if you can afford to pay your taxes; the IRS can attempt to collect taxes for up to 10 years since they were assessed.

6. Put them on your credit card

Small, revolving expenses are perfect for putting on your plastic, so why should taxes be any different?

They’re not, as long as the total amount isn’t too expensive to pay off at the end of the month.

Experts recommend using your credit card only if you owe $300 or less.

If it’s higher, seek out another alternative, since credit card interest rates can make your taxes more unaffordable than they already are.

7. Pay your taxes with a home equity loan

A home equity loan, or HELOC, isn’t a mortgage loan to pay off your house.

It’s a loan based on the equity in your home, i.e. the value your house has accrued since you’ve been paying it off with a mortgage.

You can use a HELOC to pay your taxes just as you would with a credit card.

You may find the interest rates are lower than double-digit credit card APRs, but make sure you can afford the monthly payments since defaulting on a HELOC could jeopardize your home ownership too.

Never file for bankruptcy until you’ve exhausted every single last option available to you.

In some cases, it may be the right solution. You may be able to qualify for chapter 7 bankruptcy if the taxes are income based, you filed your tax return at least two years ago, the return was due at least three years ago, and the taxes were assessed at least 240 days ago.

“If you can’t get rid of (your taxes) in a chapter 7 bankruptcy, you can usually file a chapter 13 bankruptcy to make payments on the debt,” notes Philip Gerth, a tax and debt attorney.

If you don’t feel comfortable pursuing any of these avenues by yourself, consider professional, legal or financial assistance.

What Happens If You Don’t Pay Your Taxes

If you owe a large tax bill, don’t avoid the problem. It won’t just go away.

“If you were to ignore your taxes because you couldn't pay them, not only would you be hit with interest charges, but you'd owe significant penalties as well,” says author and certified financial planner Mark Durrenberger.

According to Gerth, the tax authority (in this case, the IRS) could pursue one or more options:

It’s worth noting that none of this will happen right away.

It’s not like the IRS will come knocking at your door if you’re one day late with your taxes.

And they usually won’t pursue such extreme legal measures unless you’ve completely refused to pay your taxes or ignored their requests.

They’ll typically be willing to work with you to negotiate or rectify your tax dilemma before taking action.

Taxes can be taxing, and vexing if you’re in a position where you can’t afford to pay them.

But, remember that you do have options to pay your taxes in full and be better prepared the next time tax season rolls around.