Hiding Money From Your Spouse: Is it Okay?

Financial secrecy isn't the best way to build a relationship, but sometimes it's necessary. A look at when it's OK to hide money from a spouse. 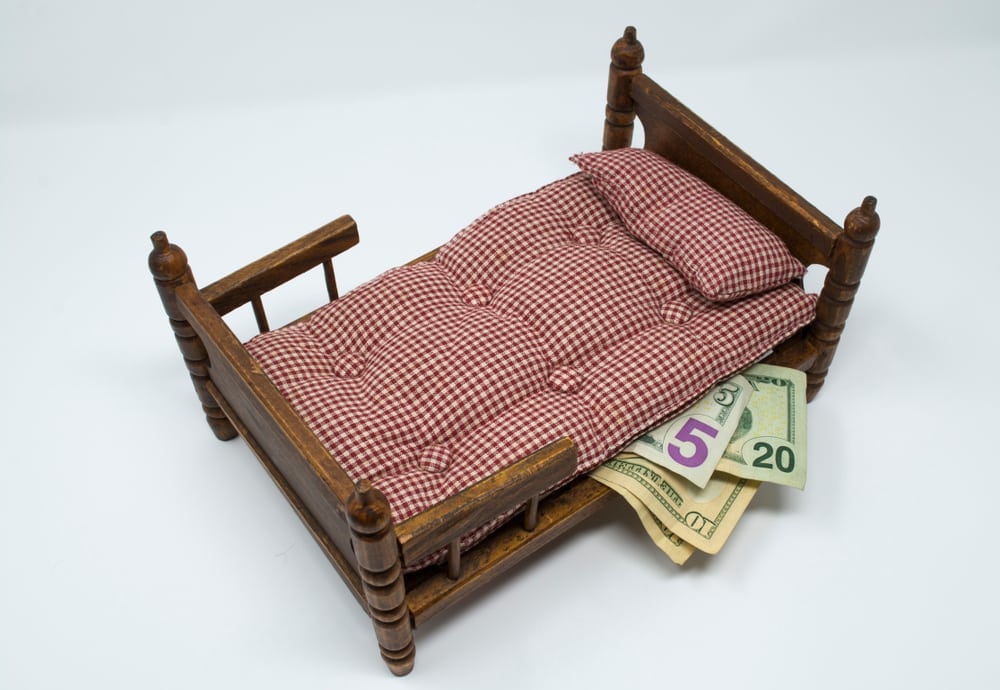 In 2009 Debbie DeChambeau’s husband came to her with surprising news: he wanted a divorce.

Out of a work for nearly a decade with two kids to support from a previous relationship, DeChambeau, 54, struggled to get back on her feet.

“I didn't have an income,” said DeChambeau.

About three months after she was notified by her now ex-husband that he wanted a divorce, he cancelled all of the credit cards, opened a new checking account for himself, and only put $300 a month into a joint account to cover food and essentials.

With no money of her own, DeChambeau said she felt paralyzed and emotionally devastated.

She couldn’t afford tuition for her son’s senior year in college, had no money saved to send her other son to college, and sold some of her belongings to make extra money.

Eventually, DeChambeau found a job, but it took several years for her to feel financially stable.

"To this day I wish that I had a 'mattress fund,'" said DeChambeau. "A lot of people feel like they shouldn't have a 'mattress fund' because it’s almost like you’re anticipating a divorce, but the reality of today is so many people are getting a divorce that you’ve got to protect yourself.”

DeChambeau’s story is one reason why some personal finance experts say you should stash money away from your significant other.

But on the other side of the argument, financial experts say hiding something -- anything -- from a spouse is a red flag and a sign that you’re in a potentially unhealthy relationship. It can also have legal consequences.

“Hiding money from a spouse is a bad idea because spouses have a fiduciary duty to each other to deal fairly and openly,” said David Pisarra, a divorce lawyer based in Los Angeles and host of the Men’s Family Law Podcast.

"When one spouse is hiding money, if it is exposed to the court, rather than dividing that money in half, the entire amount can be given to the defrauded spouse."

Plus, if it’s revealed that a spouse has hidden money away during a divorce, it might mean that the gloves are off for a full-scale investigation with private investigators, forensic accountants, and depositions by opposing counsels.

While financial secrecy is not the healthiest way to build trust and confidence in any relationship -- many Americans partake in financial infidelity every day.

A survey from the National Endowment for Financial Education found that three in 10 Americans who have combined their finances with a partner have lied to their significant other about their finances.

For 16 percent of the couples surveyed, the financial deception ultimately led to divorce.

“Deceptions occur because of the fear of confessing financial misdeeds,” said Ted Beck, president and CEO of NEFE.

Whether the person is cheating, avoiding conflict, or trying to keep the financial house in order, there are many reasons why someone might hide money from their significant other.

In some cases, having a mattress fund is necessary as an avenue out of a bad relationship.

“Creating an emergency fund, if needed, to escape a dangerous situation is generally a wise move,” said Pisarra. “Just be sure to disclose the funds in the divorce at the appropriate time.”

In these situations, stashing money away is not only a good move, but a smart one:

If you’re a battered spouse, you might fear for your life and worry about how you can leave your domineering significant other.

You’ll need to hide money away and slowly add to your emergency fund over time so that you have a financial safety net when you do leave.

You’re getting a divorce soon

If you’re about to leave a bad marriage or suspect divorce papers are coming your way, it’s time to start saving your own cash.

Depending on how financially dependent you are on your spouse, you might find yourself in a sticky situation.

You’re married to someone who is bad with money

If your lover is late with paying the bills, doesn’t know the definition of the word “save,” and hasn’t matched his or her company’s 401(k) plan, you might have to start saving some cash on the side.

A spouse who doesn’t manage their money well will only add stress to your life, not to mention your financial situation.

It’s in your best interest -- and probably theirs too -- to have a stash of money on the side.

Aside from these exceptions, keeping money hidden from your spouse -- like lying about going on a shopping spree or buying a big-ticket item -- won’t help a couple build a more stable relationship, financially or otherwise.

“Couples from all walks of life face financial challenges, but adding deception about money to the mix can make tough economic times even more daunting," said Beck.

“People who are keeping things from their partner or spouse need to own up to their behaviors immediately. Only then, can couples work together to improve their financial well-being."

If you’re hoping to improve your financial situation with your significant other, here are a few tips:

Create financial goals together as a couple and talk about how you both will change your individual money habits to reach them.

It’s not always about who’s right. Sometimes you need to give a little to get a little.

Make rules to govern how you spend a large amount of your money.

Make it a date

Manage your money better by making a date to discuss each month to discuss your progress toward fiscal management.

Resist the temptation to lie

Tell the truth about the financial mistakes you make.

Don’t hold a grudge or blame your partner for the money mistakes he or she made in the past.