What Are the FICA Taxes on Every Payroll Check?

Learn about the FICA taxes that you pay with every paycheck (seen in your pay stubs) and the percent taken from your income for Social Security, Medicare, etc. 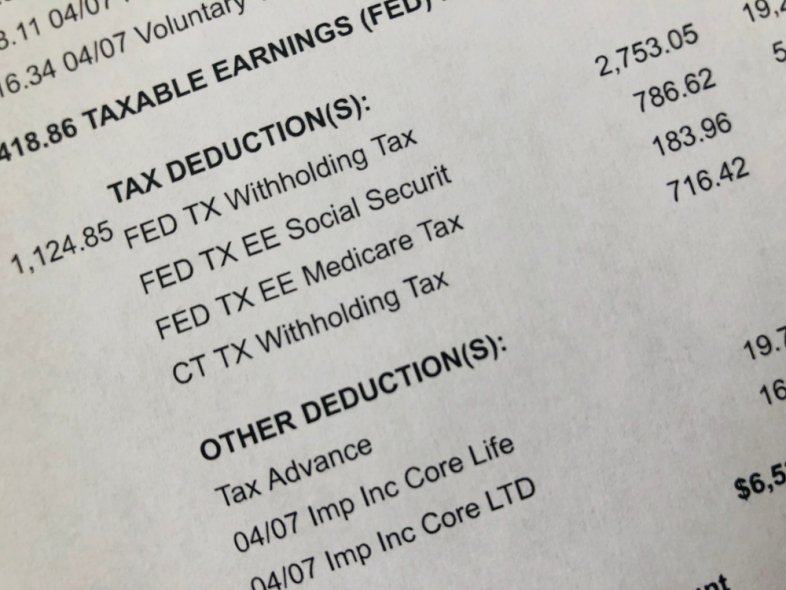 When you received your first paycheck, you might have been shocked to see a much smaller net pay amount than you had expected.

You knew you had to pay taxes, but you had no idea exactly how much they’d be.

You may have heard of federal income taxes before.

If you live in a state with state income tax, you knew those would come out of your paycheck, too. One aspect few people know about is FICA taxes.

FICA taxes are even more taxes that come out of your paycheck, as well.

Here’s what you need to know about FICA taxes to understand them and why they come out of your paycheck.

What is the FICA tax?

It requires employers to withhold FICA taxes from your paycheck.

The money withheld from your paycheck is used as a funding source for Social Security and Medicare programs.

While some people may see a single FICA line item on their pay stubs, there are many components to FICA taxes.

Currently, there are three major parts employees must pay.

Additionally, there are two major parts employers must pay.

As an employee, there are three separate taxes you may be responsible for as part of FICA.

Generally, high-earners are determined as follows (as of 2020 -- see below section for more details):

At a minimum, you’ll be paying 7.65 percent in FICA taxes as an employee up to the limitations.

Your employer may break out these tax parts individually when detailing your employee earnings on your pay stub.

Another option is leaving them together as a single lump-sum number.

The employer is also required to pay taxes under FICA.

Both employees and employers must each pay the 6.2 percent Social Security tax. Employers must also match the 1.45 percent Medicare tax.

Together, these taxes add up to 7.65 percent. This can add up to a large expense when you consider the number of employees a business has.

Unlike employees, the employer does not have to match the 0.9 percent additional Medicare tax for high earning employees.

FICA taxes for the self-employed

If you’re self-employed, you also have to pay these taxes. FICA isn’t what causes this, though. Instead, the Self-Employed Contributions Act, or SECA for short, requires it.

Since you are both the employee and the employer, you basically have to pay double the tax for Social Security and Medicare.

In total, Social Security and Medicare standard taxes add up to 15.3 percent for self-employed individuals.

The employer part of the tax is tax-deductible. This lowers the tax burden a little bit.

If you are subject to the 0.9 percent additional Medicare tax, you only have to pay the employee part since there is no employer part.

Self-employed individuals should consult a tax professional to see if there are ways they can minimize this tax liability. There may be tax planning opportunities that could save you money.

The individual parts of the FICA taxes have different rules governing when you have to pay them.

Here’s what you need to know about each one.

Thankfully, you don’t have to pay the largest of the three taxes, Social Security tax, on an unlimited amount of income.

Each year, a limit is set on the income this tax must be collected on.

If you make more than the wage base, Social Security tax withholding will stop after you have paid the correct amount.

Highly-compensated individuals that switch companies during a year may end up overpaying this tax.

The old and new employers don’t talk with each other about how much tax you paid, so you may pay taxes over the wage base limit.

The amount you overpay can normally be refunded when you file your federal income tax return.

While the Social Security tax has a wage limitation, the Medicare tax does not.

Both you and your employer will each pay the 1.45 percent Medicare tax on all of your qualifying wage income.

The Social Security and Medicare taxes have been around for decades but the supplemental Medicare tax is relatively new. It was implemented in 2013 as part of the Affordable Care Act.

It doesn’t start until your wages and/or self-employment income reaches a particular amount.

The amount depends on your tax filing status and is as follows:

Employers must withhold the 0.9 percent additional Medicare tax when an employee’s Medicare wages exceed $200,000. They start withholding the additional amount once your wages cross that threshold.

Married couples may have two income earners that require paying the additional Medicare tax even though neither one makes more than $200,000.

Be aware of this tax and how it may impact your tax situation. If your employer doesn’t withhold the additional Medicare tax and you know you’ll owe it, start setting money aside to pay it.

One way to do this is to increase your federal income tax withholding using Form W-4.

As you can see, this tax is more complicated than the others. If you have any questions about the details contact your human resources department or a tax professional.

Other Common Names for FICA Taxes

Depending on your employer or who you talk to, the FICA taxes described above may be referred to in many different ways.

Regardless of what they’re called, the calculations remain the same.

It’s helpful to understand these other common names just in case they show up on your paycheck.

They may not show up with your current employer at this time, but your employer may change payroll companies. This action could result in changes to your paychecks.

Alternatively, you may switch to a different job that uses an alternative name for these taxes on their pay stubs.

The 6.2 percent may also be called:

The 0.9 percent tax is often lumped in with the 1.45 percent Medicare tax when it applies.

Finally, sometimes these amounts are simply combined on your paystub and called FICA taxes. Other names may also be used, but these are some of the most common ones.

Are Any Deductions Exempt From FICA Taxes?

As you’re probably aware, many deductions can be taken out before you calculate the federal income tax withheld from your paycheck.

These include things like the qualified health insurance premiums you pay and the funds you set aside in a traditional 401(k) plan.

Some people may think these same deductions apply to FICA taxes.

This can be confusing because both sets of taxes deal with the federal government. The calculations are based on different laws and rules, though.

For FICA tax purposes, only certain deductions reduce your FICA-taxable income. In general, certain qualified benefits are exempt from FICA taxes. These benefits must be part of a cafeteria or Section 125 plan to be exempt.

Common examples of these types of benefits, assuming they’re part of a qualified plan, include premiums for:

Certain other benefits may also qualify.

The money you contribute pre-tax to a traditional 401(k) is still taxable for FICA taxes.

Consult Your Human Resources Department or a Tax Professional

While the FICA taxes are relatively straightforward, most tax topics have plenty of layers of complexity based on your specific situation.

If you have questions about how FICA taxes impact your paycheck, you can likely find answers by talking to your company’s human resources or payroll department.

Smaller companies without these departments may not understand the complexities behind these calculations. Instead, they may outsource payroll to a third-party vendor.

In these cases, the payroll vendor may be able to answer your questions.

Those that are self-employed should seriously consider talking to a tax professional to see if they can lower their self-employment taxes by the way they structure their business.

Even if you aren’t self-employed, consulting a tax professional may be able to help save you money in other ways, too.