How Bonuses Are Taxed by the IRS

Learn how your bonuses are taxed by the IRS, including tax withholdings based on the amount of your bonus income. 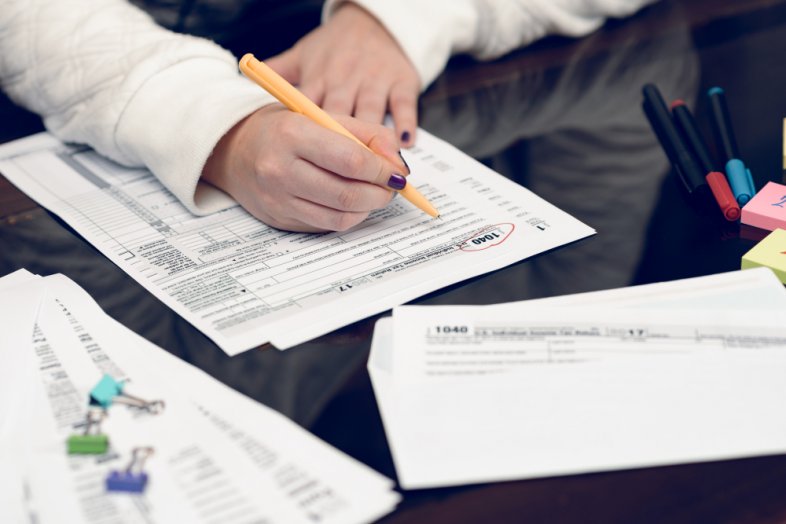 So you just received a bonus. You looked at your pay stub and realized more federal income tax was taken out than your normal paycheck.

But why did this happen?

Are you taxed more on bonus income than regular income?

The short answer: you aren’t taxed any differently on your bonus income.

The IRS just uses a different methodology to withhold taxes from paychecks where you only receive bonus income.

If your bonus was lumped into a regular paycheck, the calculations will likely result in more federal income tax withheld, too.

We have the detailed answers you’re looking for and everything else you need to know about your bonus and federal income taxes.

As always, contact a tax professional if you need advice regarding your specific tax situation.

No, bonus income is technically taxed the same as regular wages in the eyes of the IRS.

Assuming everything else is equal about these three people’s tax situations, they’d all pay the same amount of federal income tax.

What could be different, however, is the amount of federal income tax withheld from their paychecks and bonus checks.

Taxes May Be Withheld Differently on Bonus Income

The IRS issues guidance each year about how to withhold federal income tax from an employee’s paycheck and from bonuses. This is published in IRS Notice 1036.

The part that deals with bonuses is titled “Withholding on Supplemental Wages”.

Bonus income above $1 million in a calendar year

Bonus income below $1 million in a calendar year

For the vast majority of people that earn less than $1,000,000 in supplemental wages, things are more complex.

Your employer has a few ways they can pay out your bonus:

If bonuses and wages are combined

If your employer combines your bonus with your regular paycheck and doesn’t break out the amount of your bonus and your wages, they must withhold federal income tax according to the usual calculations.

While you’d think this would result in the same percentage of federal income tax withheld as a normal paycheck, it usually doesn’t.

The tables give an idea of how much income you’ll earn over the year if you’re paid in equal amounts throughout the year.

The tables also take into account a reduction of income based on the number of withholding allowances you selected when you filled out form W-4.

If you get one big bonus once a year, the tables are confused. They think you suddenly are making much more income throughout the year.

In reality, you just received a one time bonus.

Due to the way the tax brackets work, more federal tax is withheld on each additional dollar of income in higher tax brackets.

This can result in this method withholding more federal income tax from your paycheck than regular paychecks both in total dollar amount and as a percentage of your income.

If bonuses are separate from wages

If bonus pay is separately identified from wage pay, your employer has two options to withhold federal income taxes from your bonus.

It is up to the employer to decide which method to use.

However, if your employer didn’t withhold any federal income tax either this year or in the prior year, they must use the second method described below.

The first method is easy to understand.

Depending on how much income you earn in a year, this could be more or less than your normal federal income tax withheld.

However, this will result in more tax withheld than normal for most people.

The second method is more complicated, but it is basically the same concept as if bonus and wage pay are combined but aren’t broken out separately which is detailed above.

Get money back if you're not in higher tax brackets

If your employer decided to withhold federal income tax at 22% or if the calculations resulted in a larger than usual withholding percentage from your bonus paycheck, you may be wondering how to get your money back.

Thankfully, there’s a system in place to handle this.

Each year, you file your federal income tax return. When you do this, the IRS will repay any over-withheld income tax to you in the form of a tax refund.

Essentially, your tax return calculates how much federal income tax you owe based on the income you earned in the tax year.

Then, it adds the amount of federal income tax you had withheld from your paycheck and any estimated income taxes you paid.

If the amounts you paid in, including extra withholding on your bonus, exceed what you owe, you get a tax refund.

If the amounts you paid in, including potential extra withholding on your bonus, are less than what you owe, you should pay the remaining tax owed with your return.

Bonuses for the Self-Employed

What should you do if you’re self-employed and get a bonus? Do you have to follow the same steps as described above?

If you own your own business and are considered a W-2 employee of that business and pay the bonus as W-2 wages, you should follow the guidelines above.

However, if you’re an owner of a business and you aren’t a W-2 employee, you pay your withheld federal income taxes with estimated tax payments.

Instead of following the supplemental wages withholding requirements for employees listed above, you’d follow the guidelines for paying estimated tax payments.

Pushing You Into a Higher Tax Bracket

Depending on your position, a bonus could be a sizeable chunk of money. At the same time, you could get no bonus at all if you or your company doesn’t reach their goals.

Believe it or not, bonuses could push you into the next tax bracket.

Being pushed into the next tax bracket isn’t a big deal.

Instead, only the amount of income in the new tax bracket will be taxed at a higher rate.

Which would you rather have:

Ways You Can Reduce Your Taxes

Whether you receive a bonus or not, there are many ways you can reduce the amount of federal income tax you owe.

These are completely legal as long as you follow the laws.

Most taxpayers get a major tax deduction by either claiming the standard deduction or itemized deductions.

The standard deduction is easiest because you don’t have to have any particular documentation to claim it, but some people may benefit more by taking itemized deductions.

In addition to the standard deduction or itemized deductions, you may be able to claim other tax deductions and tax credits to lower your tax bill such as:

If you do get a bonus and you have some say over when you get it, timing may be able to help you lower your tax bill.

Let’s say you can decide to get your bonus in December Year 1 or in January Year 2. You can look at your projected income and projected tax laws for both years.

If you’ll have significantly less income in year two and tax laws remain the same, you could potentially pay less in taxes by delaying the bonus until January Year 2.

However, if you’ll have lower income in year one and tax laws will remain the same, you’d likely pay less taxes by taking the bonus in December Year 1.

Bonuses give you more income -- very difficult to argue against more money.

Unfortunately, the federal income tax withholding may be a bit higher on your bonus than you’re used to.

You’ll still end up with more money overall though.

If the money withheld on your bonus is too high and you’ve correctly had your federal income tax withheld from the rest of your paychecks, you should get a refund for the difference when you file your income tax return.