Find out what non-U.S. citizens should know about filing U.S. tax returns and paying U.S. income tax based on non-resident alien status. 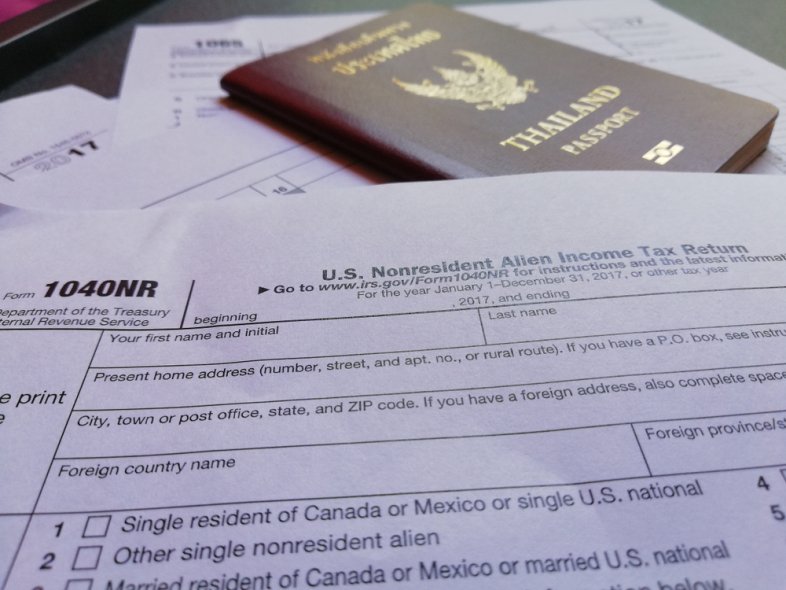 Most likely, you do have to file a U.S. tax return.

Unfortunately, tax law in the United States is complicated.

That said, there are some general guidelines you can follow to start figuring this out yourself.

To determine your status, there are two tests you must take:

If you pass either test, you’re considered a United States resident alien.

(Note: You're likely also eligible for an individual retirement account.)

There are exceptions that may apply in certain circumstances so it’s best to consult an expert that can take a look at your entire situation.

If you are a lawful United States resident at any time during the calendar year, you pass this test.

Typically, this is achieved by having an alien registration card, Form I-551, which is commonly referred to as a green card.

In order to lose this status, you have to:

It is possible you may not be a lawful permanent resident for the full year.

If you don’t meet the substantial presence test for the year, your residency starting date is the first day which you are present in the United States as a lawful permanent resident.

You can elect to be treated as a resident alien for the entire calendar year if you wish.

The substantial presence test is more complicated and has more exceptions. This test is based on the number of days you’re physically present in the United States.

If you’re present at least 31 days during the current year and you meet the next calculation, as well, you pass this test.

The second calculation is a bit tricker.

You have to be present 183 days during the three-year period that includes the current year and two years immediately before that.

However, you don’t count every day. Instead, you count all of the days you were present the current year.

Then, you add one-third of the days you were present in the first year before the current year.

Finally, you add one-sixth of the days you were present in the second year before the current year.

If you meet both the 31-day rule and the 183-day rule, you’ve passed this test notwithstanding any of the many exceptions you can read about here.

Filing Taxes as a Resident Alien

If you’re a resident alien, things are pretty straightforward.

For the most part, you’re taxed like a regular United States citizen and will use the usual forms to fill out your tax return.

Unfortunately, United States residents are required to pay federal income tax on all income you earn worldwide. It doesn’t matter which country you earn the income in.

As a resident alien for an entire tax year, you’re able to claim the same deductions as United States citizens.

On the other hand, you’ll need to check each tax credit you might qualify for to see whether you can take it as a resident alien.

Filing Taxes as a Nonresident Alien

As a nonresident alien, things are a bit different.

Instead of filing Form 1040, U.S. Individual Income Tax Return, you’ll likely need to file one of these two forms:

These forms generally only tax nonresident aliens on their United States-sourced income.

This income is subject to two different tax rates depending on how the income is earned:

Effectively connected income (ECI) can be earned in a couple of ways.

This income is taxed at the same graduated rates as it is for a United States person.

FDAP income is different. It is typically passive income such as:

FDAP income is usually taxed at 30%, but may be taxed at a lower rate depending on any applicable tax treaties.

However, tax treaties may allow you to claim certain deductions or tax credits.

For instance, certain individuals from India may be able to claim the standard deduction.

You May Have to File Two Tax Returns

Based on the rules, it’s possible to be a dual-status taxpayer that must file both a resident and a non-resident tax return in the same year.

This typically happens in years which you transition from being a nonresident to a resident.

This can get complicated. Consult a tax professional if you need help determining what to do.

As a citizen or resident of another country, three particular items may help you minimize your tax liability.

If you pay taxes to a foreign country, you may be able to claim a foreign tax credit or take an itemized deduction for foreign taxes paid.

The foreign tax credit allowed can be calculated on Form 1116, Foreign Tax Credit.

It’s important to note, you can no longer deduct foreign taxes paid on real estate.

Tax credits are better than deductions if you qualify for them.

A credit will reduce the amount of tax you owe by one dollar for each dollar of credit.

A deduction only reduces your taxable income by one dollar which means you’ll only save a fraction of that dollar after taxes are applied.

Another way you may be able to save is if your country has a tax treaty with the United States. Tax treaties can help reduce your United States tax liability.

The IRS states that tax treaties generally reduce the United States taxes of residents of foreign countries as determined under the applicable treaties.

Tax treaties can be complex.

Using a tax professional that is intimately familiar with any tax treaties your country may have with the United States would be a smart move to potentially minimize your United States tax liability.

What About Taxes In Your Home Country?

Tax laws around the world can vary wildly from country to country.

Each state has its own tax laws.

Some states don’t have an income tax at all. Others have hefty income taxes.

While states might have a income tax that closely mimics the federal income tax, they don’t have to follow the same rules.

You may need to file in the state you’re living in.

Additionally, some items, like tax treaties, may not apply to state taxes like they would with federal taxes.

It is possible to read through the massive amounts of tax information on the web to figure out how to file your tax return on your own.

It probably isn’t worth the hours of your time you may waste doing so.

Instead, look for a tax professional who commonly works with resident or nonresident aliens, depending on your situation, to get help preparing your return. These professionals should be best suited to file your tax returns.