Why Defaulting on Student Loans is a Bad Idea?

If you read the news, you’ve no doubt heard of Lee Siegel and his recent defense of student loan default published in The New York Times. Siegel’s story was called “Why I Defaulted on My Student Loans.” His suggestion that other borrowers follow suit has sparked a frenzy of controversy and backlash, with articles published the very next day calling him a deadbeat and an “unrepentant leech.” Not surprisingly, he’s got more than a few supporters in his corner. I am not one of them, however, and decided to show you the cost of default and why you shouldn’t follow Siegel’s advice. 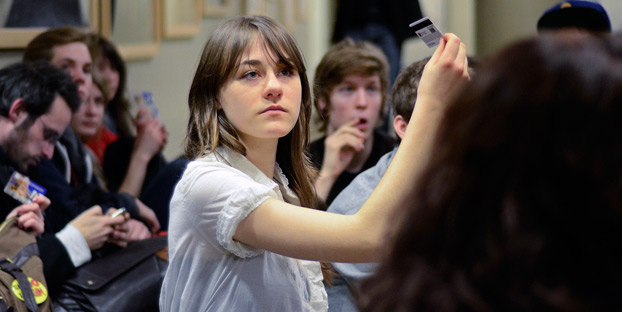 A first year undergraduate student at DePaul shows her ID to prove she is a student at the university during a protest against tuition hikes held at Lincoln Park student center. Flickr source

Why defaulting on student loans is a bad idea

As someone who still owes student loans for not one, but two degrees that I’ve never actually used in a professional capacity, making my monthly payments is a regular reminder of how stupid I was for borrowing the money in the first place. Do I think my poor decision-making justifies stiffing my lender? Not at all. Will I keep paying them? The answer is a grudging yes.

So why do I keep sending out a check every month to pay for an education that’s proven to be virtually worthless? For one thing, I’d like to keep my credit intact. At some point, I’d like to buy a home again and I won’t be able to do that with a lousy credit score. I’m also not that interested in finding out what kind of collection actions the federal government is capable of.

For another, I know that someone else would have to pick up the tab if I were to default. The lender and the government might take the initial hit but the cost is going to get passed on to other borrowers down the line through tax hikes or higher fees. With my own kids headed off to college in a decade, I’m not too keen on the idea of putting them on the hook for my debt.

Finally, I continue paying the loans each month because I’ve accepted responsibility for them. I chose to borrow more than I needed to as an undergrad and live on campus when staying at home would have been cheaper. I chose to go to grad school and add another $20,000 grand to my debt total without having a clear idea of what I was going to use my degree for.

It would be easy to blame my debt on the economy or greedy lenders or rising tuition costs, but the bottom line is I made bad choices to begin with. While Siegel’s assertion that more people should consider default is tempting, it doesn’t jibe with my sense of financial responsibility.

The cost of student loan default

To put the issue in perspective, we’ve developed an infographic that breaks down some of the costs of default. We’ve also included an example of what a deadbeat borrower could stand to save by skipping out on their loans.

What kind of stories would you like to see on MyBankTracker? Share your ideas and burning money questions in the comments below.

Related Articles
Income-Based Student Loan Repayment May Leave You Deeper In Debt
Why You Should Avoid Tax Refund Advance Loans
What Are Interest-Only Repayment Plans for Student Loans?
6 Extreme Ways to Get Out of Debt for Good
Should You Use a HELOC to Consolidate Debt?
Is It a Good Idea to Use Your IRA to Pay Off Credit Card Debt?