Learn what happens when your credit card is declined while you're trying to pay for the bill. Find out what you can do about it. 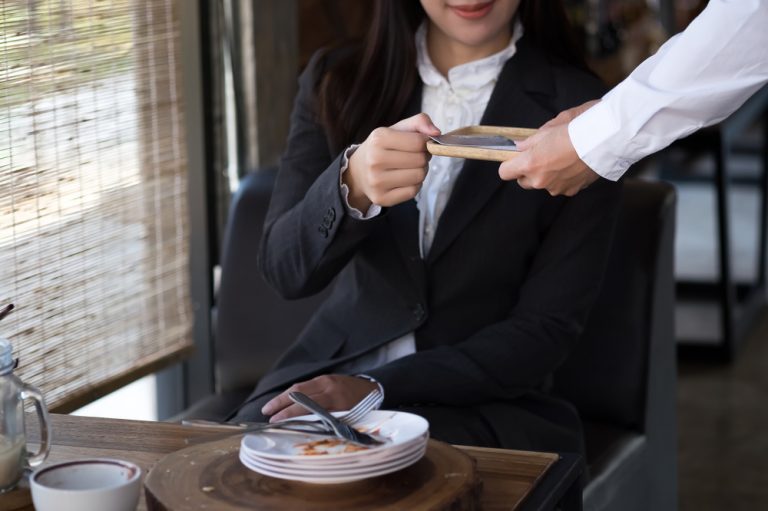 It’s a special night, and you’re out on a big date at the fanciest restaurant in town, or you’ve taken some family or friends out to dinner.

The evening goes great, you’ve finished the best meal in town, and now it’s time for you to pick up the check.

As your waiter brings the bill, you hand him your credit card as he goes into the back to make the transaction.

Returning to your table, he hasn’t brought you your receipt, but rather some disconcerting news whispered discreetly:

Your credit card’s been declined.

It’s becoming obvious to your company that something is awry, as a wave of worry comes over you. So what happens next?

Quick answer: Most likely, your personal information on your ID will be written down. You'll be expected to return to pay for the bill.

You're Not Washing the Dishes

We know what you’re thinking, and we’ll stop your thoughts right here: No, you won’t be forced to wash dishes as punishment for not paying.

While it may have been a common practice in days of yore, today’s restaurants, especially finer dining establishments, would rather not have customers hanging around in their kitchen areas.

They have their dinner rush routines fine-tuned, and having an average patron thrown into the mix would only slow things down — plus, you might not have the right training to start kitchen patrol duty on a whim, or operate modern industrial dishwashing equipment.

There’s also the legal aspect, too. You could hurt yourself and you may have a lawsuit against the restaurant that forced you to wash dishes.

Being coerced to work in an unionized restaurant may also be illegal.

So what is your alternative when you can’t pay? Your stomach may be full, but your wallet is effectively empty when you’ve got no other method of payment.

The first step is learning why your card may have been declined, how a restaurateur may respond, and what you can do about it for the future.

Why Your Credit Card Was Declined

One of the worst parts about getting a credit card declined unexpectedly is not knowing why it was declined. The fact is that your card may be rejected for a host of common reasons.

It may not occur to some cardholders that their balance has nearly reached their credit limit, so any future attempts to purchase something will get your card declined.

Stay mindful of what you buy and how much you spend, and always check your monthly statements to monitor your balance before it gets out of control -- and keeping your credit within 30 percent of your limit is the best way to maintain a good credit utilization ratio (the amount of credit you use versus your available credit).

Many credit cards also enable users to receive alerts via text or email when you’re approaching your limit.

Tip: Ask for a higher credit limit — you'll have a higher spending cap and it can improve your credit score.

Your card company may also have placed a temporary hold on your credit card because they perceived a potential security breach, threat, or fraudulent spending on your account, which would temporarily prevent you from making any purchases.

You may be traveling and making several purchases (like your restaurant bill), or you’ve recently bought something from a non-secure website.

You may know that you made those purchases, but your credit card company may place a block on your account just to make sure your card wasn’t stolen by identity thieves, or that your recent account activity isn’t suspicious.

In this case, getting declined is actually your card company looking out for you and your money!

A hold may also be placed on your account if you’re traveling and you’ve made a number of purchases in a location other than your home (including dining out), and this can trigger your card company to investigate.

If your card gets declined (in a restaurant or anywhere), first contact the customer service number on the back of your card after asking your waiter for the decline code.

You may discover that a temporary hold is indeed the very reason your card wouldn’t go through. After verifying that you’re you and that your recent credit activity is valid, the hold should be lifted.

Changes to your card or credit limit

One simple explanation why your credit card may have been rejected is that it’s expired!

You may have received a new card in the mail but didn’t take notice, or your bank or card provider may have notified you that your old card will become invalid once they’ve sent it to you.

Your card provider may also have decreased your available credit, preventing you from making any purchases that surpass the new limit. As always, your card provider is obligated to notify you of such changes under the Credit Card Act of 2009.

How Restaurants Respond to a Declined Credit Card

We’ve established two definites if your credit card is declined at an eatery:

You also won’t be arrested and carted off in the paddywagon -- not unless you dine and dash. It’s bad for business and not something any smart restaurant wants other customers to see, not unless they don’t want them ever returning again.

Still, if your card isn’t usable, how you respond to the situation is paramount.

Pointing fingers at your waiter or causing a scene doesn’t do anyone any good, and can create trouble where it isn’t warranted, putting a damper on an otherwise nice evening.

While having your card declined can be a surprising embarrassment, it can be frustrating for the restaurant, too, since you’d like to pay and they want to be paid.

Waitstaff know what to do

Restaurants are trained to respond in a few ways. An establishment that respects its patrons will first shoulder the blame.

If your card is declined, wait staff are usually trained to blame their own card reader for having trouble, even if the machine is working fine.

Your waiter may offer to try your card again, but more importantly, may also ask if you have another form of payment you can use.

What happens when you don’t have any other cash, debit, or credit cards in your wallet?

You were depending on the rejected card being approved with zero issues. It would be poor form to ask your guest(s) to pay; doing that would be almost as bad as claiming you forgot your wallet at home.

Ensuring the bill is paid later

When patrons don't have any other way to pay for the bill, restaurants may resort to writing down personal information in hopes of repayment.

For instance, don't be surprised if you're asked for your government identification and have your address and ID details recorded.

If you don't return to pay the bill at another time, the restaurant may proceed to send an invoice to your address.

In this case, you may also be asked to put forth some other piece of collateral until you return to settle the bill, like a cell phone or watch.

Most restaurant managers, owners, waiters, maitre d’s, hosts/hostesses and chefs would work with you to come to a mutually-agreeable solution.

Finally, if there is no other resolution, the restaurant may use your information and report the case to the police.

However, more likely than not, the restaurant will just take the meal as a loss. Either way, this shouldn’t even be a possibility if you come financially prepared each time you eat out.

<p>this happened to me I wanted have the manager copy my Driver Lic but he insisted to take the physical card and have me drive home without my drivers Lic.</p>