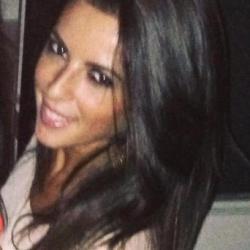 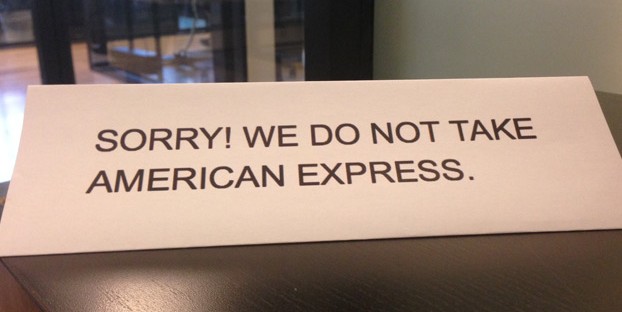 Are you a loyal American Express customer? If so, you've probably encountered signs like the one above at least once, if not many more times.

Considering the fact that American Express has an annual purchase volume in the hundreds of billions of dollars, anyone can't help but wonder why more businesses don't accept American Express.

We've certainly wondered about this ourselves. That's why we decided it was time to get an answer already.

He explained that, in many cases, the deciding factor of whether or not to work with American Express comes down to the card’s discount rate (this is a fee paid by merchants to credit card processors).

American Express has a discount rate from 2-3%. The reason we're quoting a range is because the rate they charge can vary.

The size of the merchant, the type of business, and the number of transactions are some of the major factors that can determine a merchant's exact discount rate. This fee is one that all credit card issuers charge - and one that all merchants would like to avoid.

Why Merchants Have to Pay for You to Use Your Credit Card (Hint: Interchange Fees)

This may seem counterintuitive, but merchants have to pay when you use your credit card. Credit card processing, while to the consumer is a simple means of paying for goods, to a merchant is a service that is being offered to them.

A merchant would want to accept credit cards because it makes it easier for you, the consumer, to make your purchase with them. Unfortunately, this is a convenience that merchants offer you but for which they have to pay.

Since all credit card issuers charge a different interchange fee, some of them just might not seem worth it to the merchant.

The same reason applies to international merchants as well, which causes many overseas travelers to run into payment hurdles when they try to use an American Express on their trips abroad.

And that is where the question about why some merchants don't accept American Express comes into play.

Let's go back to the rate American Express charges merchants for the interchange fee: 2-3% transaction. At first glance, this rate seems higher than what other credit card issuers charge, but that's not entirely true.

Tip: Whenever you use a debit card and then enter in your pin, you pay a fee for that transaction. If you're using a debit card, always select "credit" as the option so you don't have to pay a transaction fee. But also be mindful of the fact that it will take longer for the transaction to show up on your statement than it will with a debit card transaction with a pin. That means the balance on your bank account online will not be entirely accurate for a few days, when the transaction finishes processing.

Let's go back to the difference between credit and debit card interchange rates.

But here's the thing: if a credit card issuer offers both credit card and debit card transactions, they'll charge a different percentage based on the transaction type.

In other words, most credit card issuers charge merchants two different interchange fees, while American Express only charges one.

The analyst we spoke to at American Express explained this concept to us in more detail.

He said that a lot of merchants are confused about debit and credit rates.

When a customer uses a debit card, the transaction has a smaller discount rate for merchants, usually 1%.

Merchants see that percentage and assume that they're paying less, but they're not. AmEx can only be used as credit, which results in the merchant only having to pay one fee.

That's a signal to businesses that they might want to reconsider their policy on American Express cards, as many American Express customers could be willing to spend their money elsewhere with merchants that willingly take their card.

To see if small businesses actually found it beneficial to accept American Express in their establishments, I spoke with two people who run a small business in the Los Angeles area.

I sat down with Matt Wise, the general manager of a cocktail lounge called The Roger Room. “It’s really worth the small fee,” said Wise.

He agreed that more businesses should accept AmEx cards. "I prefer when it is easy to exchange goods and services. Any friction in the process can detract from the experience itself."

Lillian Cavalieri is the founder and CEO of iPrecinct LLC, a political data technology company. She also accepts American Express.

And she enlightened me on just how beneficial it can be to have American Express on your side from a business owner’s point of view.

In fact, Cavalieri said customers would frequently ask if iPrecinct accepted American Express, to the point where she finally put up an icon on her site to notify customers of this availability.

She also informed me that American Express is excellent when it comes to discrepancies.

If there is an issue between the business and the customer, American Express will resolve it within 24-48 hours, unlike other cards that can take three business days or longer to fix the problem.

This allows Cavalieri to deliver faster service, which is key to a business that is built on delivering data quickly.

And with the ever-increasing rate of data breaches and fraudulent transactions, having a card issuer who can respond swiftly and take care of the problem before it escalates is becoming more important than ever.

In other words, their number one complaint isn't even about their services at all. And to help solve this problem, American Express has a policy in which they will call a merchant if they find out that merchant doesn't accept their cards.

They do this so they can engage in a conversation to see if the merchant might reconsider, going the extra mile for their customers.

Tip: Don't be stuck not being able to pay for something because the merchant doesn't accept your AmEx. Consider opening another credit card that is more widely accepted. Here's a list of our best rewards credit cards.

Of the many merchants that don’t accept American Express, the Costco warehouse club is arguably the most well-known.

Previously, the popular warehouse club was partnered only with American Express - not the other three major credit card networks.

Many shoppers would complain that they couldn’t use their Visa or MasterCard credit cards, which are the two most common credit cards in the world.

While Costco did not state outright that it was due to high interchange fees, the company did say that it couldn’t come to an agreement on the financial terms with American Express.

Heavy speculation mentioned that it mostly revolved around the costs to process credit card payments. Analysts believed that Costco’s transition to Visa would result in hundreds of millions of dollars in annual savings, due to lower credit card interchange fees.

As one of the largest U.S. retailers, the move to Visa means that Costco shoppers now have the ability to use their Visa cards.

But, it also poses a big change in payments for shoppers who've previously used and opened American Express credit cards for a quicker checkout at the warehouse club.

About the author Mariel Leibowitz
Mariel is a staff writer for MyBankTracker.com. Her columns focus on consumer spending, bank accounts and money psychology.
Add a comment

<p>Really. I've heard this before, but I thought merchant fees were (at least partly) set by each merchant's bank/ credit-card processor. How much difference, because I love my Chase Hyatt Visa!</p>

<p>I think that rather than speaking to a company like Amex about why businesses don't want to deal with them, one should be approaching the businesses who turned down the opportunity to be customers of Amex as to why they don't want to deal with Amex. An Amex representative in this piece of writing using a word such as "discount rate" confuses the proper words of "merchant fees" to talk about how much money Amex takes away from a business on a card transaction.</p><p>As a small business owner, I got merchant services through Moneris in the early 00s. They only support Visa/Mastercard. The merchant fee was 2-3% and a fixed cost per transaction. Amex wasn't part of it. Things worked well. Moneris would deposit 2-3 days after taking payment from a credit card. A year later, Amex called and wanted me to accept their card. Moneris equipment would be used to process a transaction and the fee was to be higher. The Amex rep also said up to 30 days for payments to be transferred which raised an eyebrow. I waited a month before calling about where my money went before something was done. Other small business people who accepted it in my group of self employed people also reported errors in the Amex process.</p>

<p>As a merchant I would like to also point out that the credit card companies that offer points or miles pass those additional costs associated with those offerings on to the vendor as well, which accounts for most of the higher interchange fees.</p>