The History of Credit Cards

Credit cards were not always made from plastic and could not always be used to pay for purchases at all retailers.  In the 1920’s, credit was offered through individual companies like hotel chains or oil companies and you could make payments on your purchases at the specific retailer where you held credit.  It wasn’t until about 1938 when a credit card could be used at multiple retailers, according to Encyclopedia Britannica. 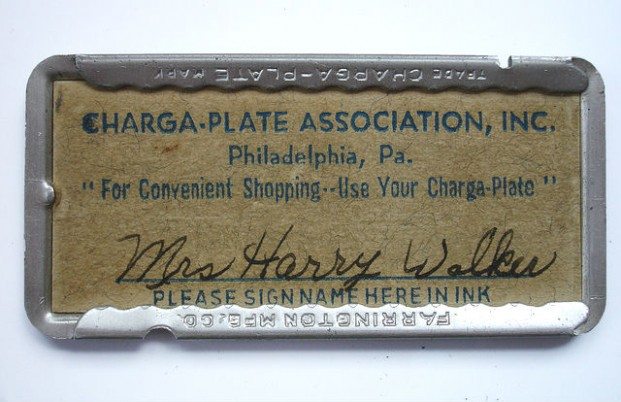 Also during these early years of credit, there were “charge plates” commonly used in department stores starting in the early 1930’s. They were similar in size and shape to a dog tag, made from metal that had the department store name and the customers address and name embossed on it.

The customer’s signature would be included on a paper insert on the back of the plate. Most of the stores would actually keep the charge plates in file cabinets and would get pulled out when the loyal customers came in to charge a purchase.   The most common brand of charge plates were called “Charga-plates” and were used until the early 1960’s.

When a purchase was made with a charge plate, the plate was placed on an imprinter containing an inked ribbon, and an impression of the embossed plate was recorded onto a paper charge slip.

In 1950, the Diners’ Club, Inc. card was introduced and became the first universal charge card. The card was created because Frank McNamara, a businessman, scheduled dinner with some friends and customers and realized that he had left his wallet in a different suit pocket when he changed for dinner.  He was embarrassed and decided to create a small, cardboard card, known as the Diners’ Club card, and sign for the purchase so he can return and make payment later.

Diners’ Club Cards could be used in 27 restaurants in NYC, and within the first year almost 20,000 American’s had one of these credit cards. The card charged stores that accepted it as payment 7% on all transactions and each customer paid $3 per year to be a cardholder.  The company earned a $60,000 profit in its second year of business, although McNamara didn’t think it would last so he sold his shares to his business partners for $200,000.  It would be several years before credit cards began charging interest on debt.

In 1958 – the American Express Company released the travel and entertainment card and Bank of America mailed out its first 60,000 BankAmericards, now known as Visa cards, to residents in California.  These first credit cards were mainly promoted to salesmen who traveled around the country.  By the 1960’s, however, companies were promoting credit cards to help people save money and both MasterCard and American Express became instant successes in the industry.

Regulation of the credit card industry began in the mid 1970’s, and congress prevented companies from mailing active cards to people who did not specifically request a credit card.  In the mid 1990’s, deregulation allowed credit card companies to charge extremely high interest rates to users, as well as late penalties and fees.

In 2009, President Obama signed the Credit Card Accountability, Responsibility and Disclosure Act into law which went into effect in February of 2010.  This law regulated credit cards again in favor of the consumers, although did not put a limit on interest rates and charges companies are allowed to charge.

If you’re interested in the history of personal finance, take a look at this slideshow of vintage savings account passbooks.

Related Articles
5 Ways Men and Women Think Differently About Money
Best Personal Loans in South Dakota in 2021
How Your Checking Account Can Impact Your Credit Score
Find the Best Savings Accounts in Kansas
What Are Credit Card Points and Miles Worth?
How Far Would You Go to Get Rid of Your Student Debt?

Debbie is a writer who specializes in parental finances, credit cards, and mortgages.