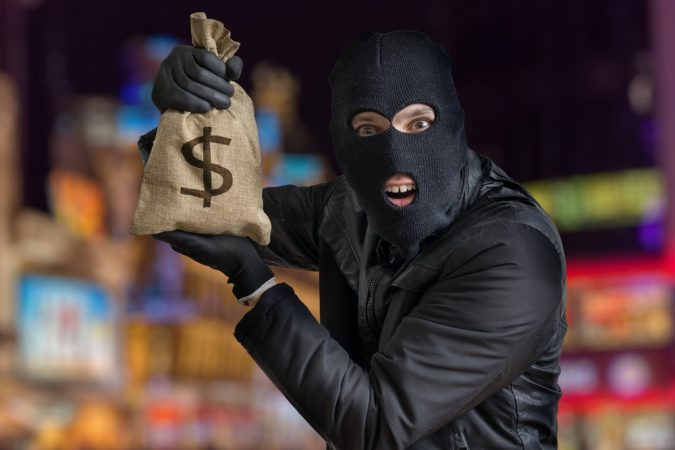 Americans love a good foe, especially if they are famous for pulling off an elaborate heist. From movies like Ocean's 11 and Inside Man, we learn to idolize and admire famous criminals and sophisticated robberies. However, not everyone is as successful.

On the very bottom of the list of "most successful bank robberies," there is a list of dummies, delinquents, and idiots who are the exact opposite of these powerful masterminds. These criminals flub all the rules from start to getaway check out the six of the dumbest:

Updating your Facebook status is often the first thing you do after finishing a good book, hearing a good song or any other mundane event. Thanks to these next two, Facebook status use has been expanded to something a little more newsworthy.

On March 23, 2011, two men armed with masks and guns held up two tellers in a small bank in Houston and made off with $62,000. Then, just two days later, one of the tellers posted on her Facebook page “IM RICH B*TCH” and her boyfriend changed his status to “WIPE MY TEETH WITH HUNDEREDS.”

It did not take long for police to piece together that this was a simple inside job from simple people. They arrested the ragtag group which consisted of two girls, a boyfriend, and a brother. As another post stated “U HAVE TO PAST THE LINE SOMETIMES!! TO GET DIS MONEY!!” So true.

2. Do you want fries with that?

Why wait on a line when you can just call in the order?

Albert Bailey must order a lot of takeout because that is exactly what he did when he tried robbing the People's United Bank in Bridgeport, Connecticut. Ten minutes before the heist, he called the bank to order that a sack of cash be left on the floor so he would not have to cause a scene by coming in waving a gun around. (Plus, could you imagine having to find a parking spot?)

Ten minutes later, Bailey's 16-year-old accomplice walked in while the bank teller was still on the phone with the police. The kid got about $900 from the teller and then ran to the getaway car with Bailey awaiting at the wheel. Unfortunately, tipped off, the police were already there, and the crooks were arrested in the parking lot. They were thinking of getting delivery, but that would mean leaving a tip.

Thinking that a pizzeria next to the bank he just robbed would be a good escape route, Quinton Walker strolled into the store and headed for the back door, until an exploding dye pack given to him by the teller emitted a red plume of smoke from his pocket.

A security video shows him walking into the store trailing the smoke and then turning around to run out. The pizzeria owner chased him down the plaza and tackled him whereupon the suspect pleaded to be let go since he didn't mean to harm the pizzeria. He explained to the owner that he was just trying to rob the bank. The cops arrived shortly after.

4. Shopping for the best rates

It's unclear whether this next attempted robbery was premeditated or the guy was just so frustrated with banks that he lost it. 35-year-old Daniel Rahynes walked into a Pennsylvania Metro Bank, handed over two forms of I.D. and seriously discussed opening an account with a teller.

Then, just as he began filling out the application form, he suddenly announced that he had made a mistake—he was actually there to rob the place. He pulled out a gun and took off with a small amount of cash, only to be arrested after hitting a car in his getaway vehicle. Maybe it was that long application form, or maybe he just forgot that they had all of his information, but this guy clearly snapped.

We suggest applying for an account online next time.

5. Foiled by their own getaway driver

South Florida, of course, has to get a shout-out, as this robbery is not only dumb, it doesn't really even make any sense. There was obviously no research and not an ounce of foresight.

While two men broke into a Wachovia bank in South Beach Florida, their buddy waited behind the wheel for their hasty escape. They went in by smashing the window at 5:45 AM Sunday morning when the bank was closed, so, unfortunately for them, all the cash was locked in the vault.

The men rerouted to plan B which was to make out with all the quarters, dimes and nickels (not the pennies obviously, those things are worthless), so they filled up some sacks and headed for the car. They hit another snag in their quick getaway as the coins weighed them down and they were easily apprehended by the police. It turns out, their "designated" driver had fallen asleep drunk behind the wheel anyway, and all the sirens and commotion wasn't even enough to wake him up.

6. Most important skill to be a bank-robber: literacy

This final robbery takes the cake. This British man's error is not only in his technique, but he won't stand a chance if he doesn't learn how to read. Or at least use common sense. Come to think of it, how did he even assemble his outfit that morning?

<p>Number six doesn't make any sense, I feel like something was deleted from the listing.</p>