The Dangers of Keeping Too Much Cash at Home

Before you keep a large stash of cash at home, consider the drawbacks of leaving this money under the mattress vs. in a high yield savings account at a bank. 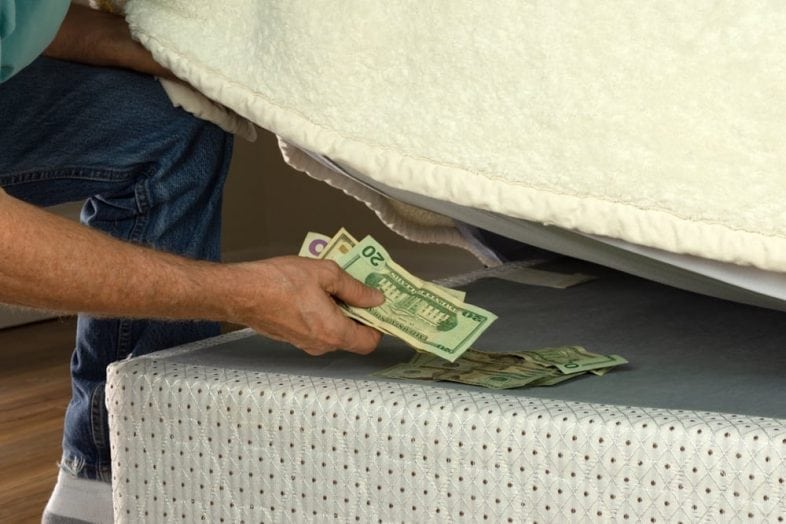 Millions of people keep cash home rather than a savings account. For most, it’s a normal part of their financial lifestyle.

But there are dangers of keeping too much cash at home, and it’s likely they don’t give much thought to what could happen.

There may be certain benefits to holding a small amount of cash at home for whatever purpose. But there are risks involved in doing so, particularly if it’s a large amount of money.

Why Some People Like to Keep Cash at Home

Some are motivated to do so by a number of different potential outcomes:

Natural disasters, like Hurricane Katrina and the recent tsunamis, have motivated people to keep some cash at home.

They fear a disaster will cause banks to close, forcing reliance on cash for basic necessities.

With the entire financial system connected electronically, there’s concern of a meltdown involving either the Internet or the electrical grid.

The potential for a terrorist attack on either causes people to keep a certain amount of cash at home.

If they do, you’d actually have to pay the bank to hold your money, rather than earning interest.

Some 7,000 banks failed during the Great Depression, and tales of the mass closures continue to circulate. However, there was no FDIC in the early 1930s.

We may have had a similar situation during the much more recent financial meltdown, but the FDIC functioned as it was expected to, and prevented a similar outcome.

Some people may prefer making small purchases in cash. It reduces the possibility of identity theft.

As a result, they may keep a certain amount of cash at home.

Purchases made through bank accounts or by credit cards create a paper trail. Some people may prefer using cash on at least some purchases for privacy.

None of these concerns are entirely invalid. But they may not be sufficient to overcome the potentially greater dangers of keeping too much cash at home.

Cash at Home Isn’t Insured Against Theft or Loss

For every argument in favor of keeping cash at home, there are at least as many dangers connected with the practice:

Cash can be destroyed

In a flood, it could be carried away, and in an earthquake it can simply disappear into an obscure crevice.

Keeping it in a safe doesn’t guarantee its existence. Cash held in a safe can still be incinerated in a fire, or buried in an earthquake.

Cash can be stolen

When thieves break into your home, they’re looking to steal anything of value – including and especially cash.

And though we don’t like to think about it, theft is sometimes an inside job. It could be undertaken by a friend or even a family member, or someone close to them who’s been invited into your home.

If your cash is destroyed or stolen, it will be gone forever. Even if an insurance policy did cover cash, it’s usually limited to no more than a few hundred dollars.

And then there’s the central question – exactly how do you prove to the insurance company how much cash you had at home?

There’s no FDIC insurance either

If money in a bank is lost as a result of the banking institution, it’s covered by FDIC insurance for up to $250,000 per depositor, per bank.

There is no similar nationwide insurance coverage for cash held at home.

If you’re saving cash at home because it may be an amount that’s in excess of $250,000, you can always work around that problem by opening an account with a different bank.

In theory, you can have $2.5 million stashed in equal parts in 10 different banks, and still be fully covered by FDIC.

Should you save a large amount of cash at home and decide you want to move it to a bank, you could run into problems with the IRS.

Since cash has no paper trail, the IRS can decide it’s undeclared income. If you deposit at least $10,000 into a bank, the bank is required to report that to the IRS.

Even if it’s less than $10,000, they’re still required to report an unusual pattern of cash deposits. This could have the IRS knocking at your door.

There are an increasing number of merchants and vendors who don’t accept cash payments.

In fact, it’s virtually impossible to use cash to make an online purchase. And that’s where an increasing amount of business takes place.

You could end up with plenty of cash at home, but nowhere to spend it.

And then there’s the biggest danger of all…

Cash at Home Earns No Interest

Long-term, this is the biggest risk because you’re guaranteed to lose money.

If you make a practice of keeping several thousand dollars in cash at home, it’s effectively dead money. Not only does it not earn interest, but it actually declines in value.

Inflation is a fact of life, and it eats away at the value of any investment that doesn’t earn interest.

For example, if you make it a practice to keep at least $10,000 cash at home, the real value of the money will drop to less than $8,000 in 10 years, with a totally predictable inflation rate of just 2% per year.

By contrast, many online savings accounts and CDs pay very high interest rates. Not only can the value of your money keep up with inflation, but it can even exceed it.

And that maintains the real value of your savings in a way that cash at home can’t.

The purpose of having any significant amount of money should be first and foremost to grow it. If you put $10,000 into a CD paying 2.50% APY, in 10 years it will grow to $12,789. By keeping too much cash at home you literally deny yourself the opportunity to grow your money by nearly $3,000 in the next 10 years!

You don’t even have to do anything to earn that kind of money.

It’s the perfect passive investment, and it will at least enable your money to retain its value against inflation.

If you prefer to not lock up your money in a CD, an online savings account will do just fine.

What is a “Safe” Amount of Cash to Keep at Home?

Many financial advisors will recommend that you keep at least some cash at home.

You may need some available in case the power goes out for a couple of days in your area, and you can’t access your bank account. Or you might just need a few dollars in cash to pay the pizza delivery guy.

But how much is too much cash at home?

Some sources hold that you should have enough to meet anywhere between two week’s and a full month’s living expenses. On the surface, that makes sense.

It would enable you to survive for at least a few weeks if for any reason you can’t access your bank account.

But there are two basic flaws in that thinking:

On a more practical level, anything more than a few hundred dollars in cash puts you in a position where the risks will outweigh the benefits.

It will do you little good to have several thousand dollars in cash at home for an emergency situation where you won’t be able to spend more than a few hundred dollars of it.

Even in an era of electronic banking and the Internet, it still makes sense to have a little bit of cash at home.

But if it’s any more than a few hundred dollars, you may be exposing your money to greater risks than you’re aware, as a way to deal with potential problems that are unlikely to be as bad as you might fear.

Let’s face it, most of the reasons that motivate people to save large amounts of cash at home are actually no more than possibilities. In reality, there’s very little probability you’ll face those circumstances.

What you’re more likely to face are the risks of either destruction. loss or theft of cash at home. Then there’s the guaranteed, ever-present reality of inflation, that’s certain to steal your money even if you hold it in the strongest safe in the world.

Keep a small amount of cash at home, but the vast majority should be in the bank. That’s where it will be protected against the threats that have the greatest probability of happening.

<p>Or they can "let" your joint-account-holder close the account without your knowledge or consent and thus take all your money and your last bank account.</p>

<p>What if no bank in this country will open you an account even with your US passport because of the Social Security Administration refusing to put your social security number in the name as on your US passport giving everything that "checks" the phrase "name mismatch" so no bank will open you an account no matter how many hundred-dollar bills you show them. No choice, there.</p>

<p>Cash in the bank earns almost no interest. The government or the bank can seize your money whenever.</p>