Projects Most Likely to Pay Off When You Finance Home Improvement

A home makeover can be a great idea if you want more space or need to modernize. But what happens when you want or need to sell your home? Will renovating, remodeling, and improvements to your home increase the price you can sell it for? And if you’re borrowing — taking out a home equity line of credit (HELOC) to pay for the work — how do you make sure the projects you’re planning will make it pay to finance home improvement? 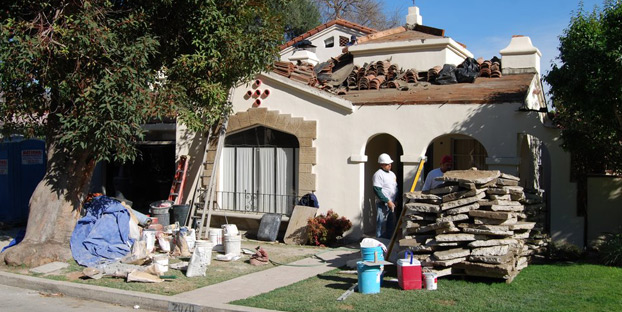 First, a couple of home improvement assumptions to be wary of: all remodels are good ones, and, you can do it all by yourself. Not all home improvements are created equal. For example, adding a pool to a property may seem like a big boost to value. But when you want to sell the place, how many potential buyers are going to want that pool? Do-it-yourselfers can handle many low-risk renovation projects, but the most important ones demand a professional. You may think you can save money going it alone, but you’re more likely to cost yourself more.

4 Projects that will add resale value

Certain projects add more resale value than others. Here are some that generally have the best financial impact:

1. Kitchens. People like to see modern conveniences and styles in the kitchen. Especially in older homes, kitchen improvements tend to add value.

3. Outdoor improvements. Your house makes a first impression quickly, so sprucing up its outdoor appearance is a smart investment. This includes siding and landscaping, particularly in the front yard.

How much do these types of projects cost?

Zillow referred us to the industry standard — Remodeling Magazine’s Cost vs. Value Report on resale values for home improvement projects. Their research shows that resale values vary a lot by geography. For example, the cost recouped for a major kitchen remodel is 68 percent in Philadelphia, and 88 percent in Los Angeles.

So, the national averages shown below indicate that only one type of project — a bathroom remodel — actually turned a profit (and a miniscule one at that). But with the potential geographic variance in values, it’s safe to say the first two projects are likely to be profitable in most high-end markets, while the second two are unlikely to be profitable in just about any market, but then you may not be able to sell your home without completing them.

We ran some costs for you to give you a general idea of how much these types of home improvement projects would cost, and how much of a HELOC you would need to fund them. (*These costs are simply estimates based on the Remodeling Magazine and Value Report.)

According to our sources, it would cost roughly $44,000 if you were to update a 200-square-foot kitchen with the following: 30 linear feet of semi-custom wood cabinets, including a 3-by-5-foot island, laminate countertops, standard double-tub stainless-steel sink, an energy-efficient wall oven, cook top, ventilation system, built-in microwave, dishwasher, garbage disposal, custom lighting, new resilient flooring.

For a bathroom remodel, it would cost approximately $10,000 to update an existing 5-by-7-foot space.

The costs would be used for replacing all fixtures to include a porcelain tub with ceramic tile surround, new single-lever temperature and pressure-balanced shower control, standard white toilet, vanity counter with sink, recessed medicine cabinet with light, ceramic tile floor, and vinyl wallpaper.

It would cost around $11,000 to have the following type of roof replaced: 30 squares of 235-pound fiberglass asphalt shingles (min. 25-year warranty) with new felt underlayment, galvanized drip edge, and mill-finish aluminum flashing. (Assume the roof is a five-square hip roof, has custom flashing at two average-sized skylights and custom cap treatment at vented ridge.)

Here’s what it would cost to replace 10 existing 3-by-5-foot double-hung windows with insulated vinyl replacement windows:

How much of a HELOC would you need?

If you were to take out a HELOC for all these projects (again, using national average numbers) you’d borrow a total of $75,982 (less interest) and get an estimated return of $68,078. So, theoretically you’d lose almost $8,000 on the proposition. However, if you had at least $8,000 equity in the house, the issue would be moot. Without the improvements, you might not have been able to sell your house.

4 Projects that won’t pay off

1. Luxury upgrades. The highest-quality upgrades often don’t have the return of mid-range ones, unless you’re in a very high-end home. Don’t assume buyers will pay proportionately for luxuries.

2. Rooms that don’t fit with the floor plan. Converting a patio into a family room may add more space but, if your dining room window now looks into the family room, it probably won’t be loved by buyers.

3. Garage conversions. Another inexpensive way to give the current homeowner more space, but when it’s time to sell, buyers want garages, so don’t expect this conversion to increase value.

4. A swimming pool. A pool can seem like the ultimate luxury — but when it comes to selling it could become a hindrance. It may be seen as a safety hazard by parents with small children or an added cost potential buyers don’t want to deal with.

Other factors in resale values

Your changes should conform to the neighborhood. If you live in a neighborhood of two-bedroom bungalows and you add a second story to put in a couple extra bedrooms, you aren’t likely to see a high return.

Upgrades to a newer home probably won’t have the same impact that they would in an older home. You’re less likely to increase a newer home’s value significantly by remodeling.

Your upgrades should be consistent. If the rest of your house was last updated 30 years ago, it will look even worse in comparison to one or two upgraded rooms.

Even if you do the right kind of projects, you’re not guaranteed a high return on your investment. Before deciding whether an improvement will add value, be sure to to crunch the numbers and tackle the projects that will yield the best return and biggest bang for your HELOC buck.