Learn more about the interest rates and early withdrawal penalties on the certificates of deposit (CDs) from CIT Bank. Compare them to other online banks. 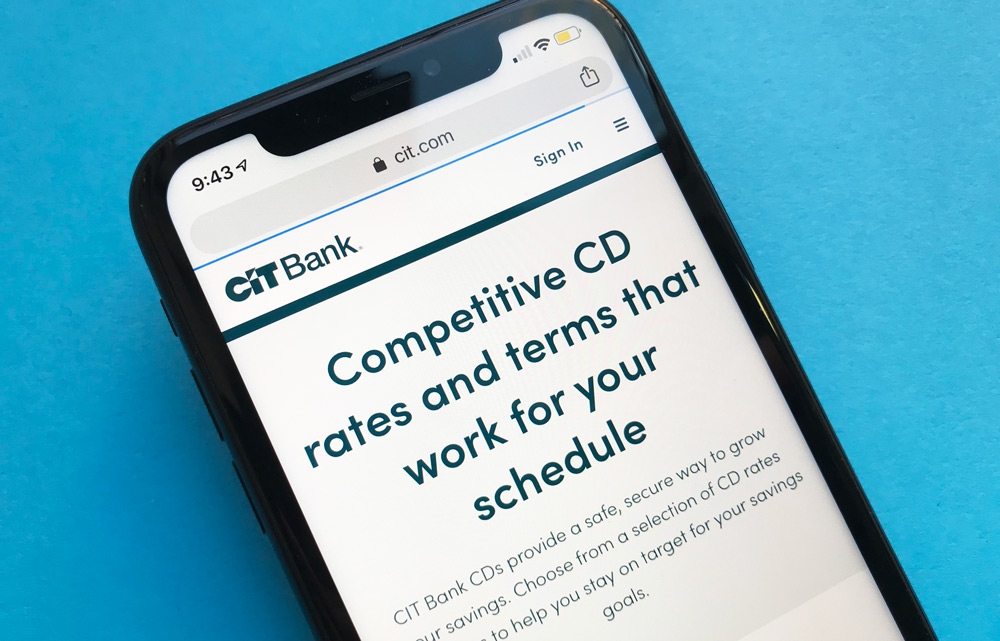 As part of its personal banking services, it offers certificates of deposit (CDs) to its customers.

In this CIT Bank CD Accounts review, we'll compare rates, fees, and services to other national and online banks.

A CD is a type of bank account that let you earn interest on your savings.

What separates a CD from a savings account is that they offer more interest but restrict withdrawals.

If you want to make changes to a CD, such as adding or withdrawing money, you’ll have to wait until the CD’s term expires, or pay a fee.

If you’re withdrawing from the CD, you must withdraw the full balance.

CIT Bank has five types of CDs, each with its own requirements and features.

The Term CD is CIT’s basic CD offering. You can select a term of up to 5 years.

The longer the term of the CD, the more interest you can earn.

Because the interest rate on a Term CD is fixed, you’ll know exactly how much interest you’ll earn over the life of the CD.

Longer term CDs offer rates higher than even many online banks offer. That makes CIT a great option if you want a long-term, secure investment.

The No-Penalty CD is similar to the Term CD in that you earn a fixed rate of interest over the life of the CD. All of CIT’s No Penalty CDs come with an 11-month term.

What sets the No-Penalty CD apart from the Term CD is that there is no penalty for making changes to the CD.

If you need to withdraw or add money, you won’t pay any fees. You’ll just have the interest rate changed to the current rate.

The only restriction is that you cannot make a withdrawal in the first six days after the CD is opened.

The RampUp Plus CD is a 1 or 2-year term CD that gives you the option to deposit additional funds once during the CD’s term.

If interest rates have gone down, both your initial and additional deposit will earn the fixed rate set when you opened the CD.

The other feature of the RampUp Plus CD is that you can request an interest rate increase once during the CD’s term.

If interest rates have risen since you opened the CD, you can have your CD’s rate increased.

You can still make an additional deposit in this situation, letting you double dip on the extra return.

The one catch is the large minimum deposit, $25,000, required to open the CD.

The Jumbo CD is only available to consumers who want to put a lot of money in a CD. The minimum deposit is $100,000.

The benefit of opening a Jumbo CD is the interest rate, which is higher than the Term CD’s same-term rates.

When you make a deposit to your bank account you’re making a loan to your bank, even if you don’t know it.

You give the bank money and the bank pays you interest. The bank then lends your money to someone else, who pays interest to the bank.

With a checking or savings account, you can ask for your money back anytime.

To make sure that the bank is able to give you your money if you ask, it needs to hold a certain amount in reserve.

That amount can’t be loaned out, so the bank doesn’t make money on it.

When you open a CD, you’re promising to leave your money with the bank for a specific period of time.

That means the bank can lend the full amount without having to hold a reserve just in case you make a withdrawal.

By giving the bank certainty over how long it will have your money, you’re making it easier for the bank to earn a return.

For that reason, the bank compensates you with higher interest rates on CDs.

To make sure you keep your promise to leave your money for the specified term, the bank will charge a fee if you make an early withdrawal.

CDs are insured by the Federal Deposit Insurance Corporation. All balances, up to $250,000, are insured against the bank going out of business.

That means it is impossible to lose money on a CD without making an early withdrawal.

If you withdraw money from your CD before the term ends, the fees may reduce your principal.

Banks want to make sure it is worth the effort to open an maintain a CD account.

You can open CD account in your Individual Retirement Account to take advantage of both savings vehicles.

The CD provides safe return while the IRA gives you valuable tax benefits. You have the choice to open a CD in either a Traditional or Roth IRA.

he CD provides safe return while the IRA gives you valuable tax benefits.

You have the choice to open a CD in either a Traditional or Roth IRA. Traditional IRAs give you upfront tax savings. Roth IRAs have you pay tax now for tax-free income later.

You can open a CIT Bank CD in an IRA with the exception of the 6-month Term CD and the No-Penalty CD.

What Happens When the CD Matures?

When your CD’s term expires, the CD is said to have matured. At maturity, you get the chance to make changes to the CD without paying a fee.

CIT Bank will notify you 30 days before your CD matures so you have time to decide what to do with it.

You’ll have ten days from the maturity date of the CD to make any desired changes. If you don’t, the CD will renew for the same term at the current interest rate.

How Does It Compare?

CIT Bank isn’t the only bank that offers CDs. You should consider these competitor’s offers.

Synchrony Bank’s CD rates vary with the balance of the CD. The higher the balance, the more interest you’ll earn.

Unlike CIT Bank, you don’t need to specifically open a Jumbo CD to get the higher rate.

If you have a moderate amount to deposit, but can’t qualify for a CIT Jumbo CD, Synchrony Bank might be a good alternative.

Synchrony Bank offers CDs with terms of 3 to 60 months and a minimum deposit of $2,000.

That makes it easy to start saving. As a bonus, you’ll get a 10-day rate guarantee. If rates go up in the first 10 days after you open the CD, your CD’s rate will be increased to match.

Ally Bank is an online bank that offers CDs to its customers. There are three types of CD to choose from.

The first is the High Yield CD, which functions like CIT’s term CD.

It’s a no-frills CD that offers a fixed interest rate and a term ranging from 3 months to 5 years. Ally’s rates a slightly slower than CITs.

The second type is the Raise Your Rate which works like CIT’s Ramp Up CDs.

Ally offers a 2-year term Raise Your Rate CD, with a one-time option to boost your rate.

You can also get a 4-year term CD that gives you two chances to boost your rate.

The final option is the no-penalty CD, which lets you withdraw your funds anytime. It works just like the CIT version of the CD.

All told, the main reason to get a CD from Ally rather than CIT Bank is if you want all your online banking to be done in one place. CIT offers similar CD options with better rates.

CIT Bank offers market leading rates and a wide variety of CD options. Anyone looking to open a CD would be well served to consider opening it at CIT Bank.