Learn whether the review of TIAA Bank certificate of deposit (CD) rates yields a positive rating, in addition to their deposit requirements, terms, and fees. 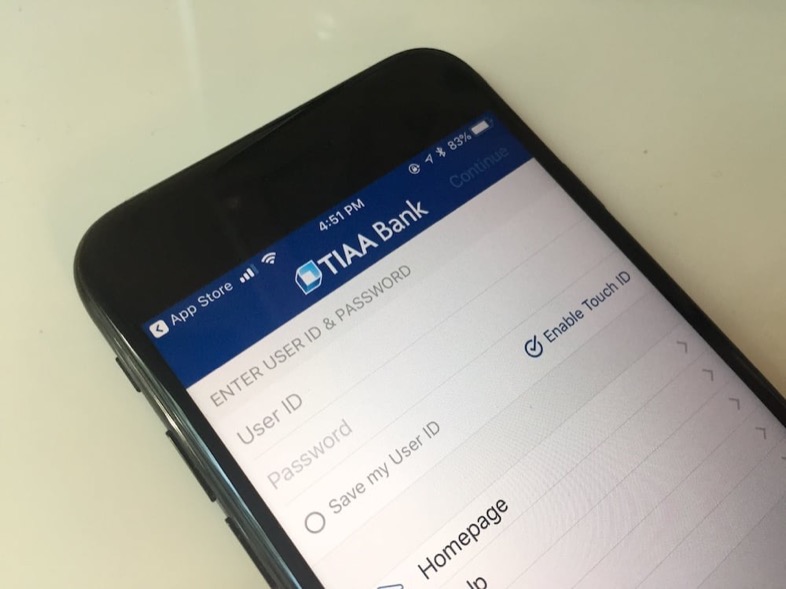 If you've got money sitting around that you don't need for some time, put it to better use.

A certificate of deposit (CD) is a good option.

TIAA Bank is an online bank that you might consider because it offers CDs that have interesting features.

If you’re looking to open a new CD, this review of TIAA Bank's CDs -- the rates, deposit terms, and fees -- will cover everything you need to know.

One of the primary reasons to open a CD is to earn more interest.

When you’re comparing CDs from different banks, the first thing you should look at is the interest rate each offers.

TIAA Bank is an online bank.

Online banks pay fewer expenses to run its operations. They don’t have to worry about operating vast networks of branches or ATMs. This means they can pass those savings on to customers in the form of low fees and high interest rates.

Brick and mortar banks, by contrast, are expensive to run.

Brick and mortar banks have to buy or rent real estate, pay for maintenance, pay utility bills, and hire people to staff each branch. They’re great if you want to be able to walk into a branch and speak to someone face-to-face, but their costs make it hard for them to offer the best rates.

Even compared to other online banks, TIAA Bank is a strong contender.

TIAA Bank is so confident in its CD interest rates that it offers a "Yield Pledge" guarantee. The bank pledges to always offer CD rates that are in the top five percent of all competitive accounts.

The only real downside:

The Yield Pledge CDs have a $5,000 minimum deposit requirement.

TIAA Bank offers three kinds of CDs. It’s Yield Pledge CDs have the best rates, but you might be tempted by the bank’s Basic and Bump Rate CDs.

They also offer flexibility. You can choose to increase the rate of your CD once during its term. Usually, you’re locked into the interest rate when you open the CD. If you’re afraid rates will rise, Bump Rate CDs give you some peace of mind.

They’re a good place to keep your extra money if you don’t expect to need the money in the near future. Like savings accounts, CDs also pay interest on the funds that you deposit, helping your balance grow over time.

The major difference between the accounts is the level of commitment you have to make when you open one.

When you open a savings account and make a deposit, you do so knowing that you can withdraw the money at any time.

When you open a CD, you have to commit to keeping your money in the account for a set period of time. This is known as the CD’s term.

TIAA Bank lets you choose from the following terms:

This is a good variety of terms, which makes it easy to choose a term that ends just as you’ll need access to the money.

The term of your CD is the primary determiner in the interest rate you’ll receive. Longer terms result in higher rates.

If you’re tempted to open a 60-month CD, even if you can’t commit your money for the full term, resist that temptation.

Making a withdrawal before your CD’s term end will result in an early withdrawal penalty.

The fees for early withdrawal are as follows:

Making an early withdrawal is the only way that you can lose money by making a deposit to a CD.

If the penalty fee that is charged is more than the amount of interest you’ve earned, you’ll pay the remainder of the fee out of principle.

When you want to open a CD, you might find that the bank won’t let you open the account unless you can deposit a minimum amount of money.

TIAA Bank has a hefty $5,000 minimum deposit requirement for its Yield Pledge CDs.

The Basic CD has a more reasonable, but still high $1,000 minimum deposit.

Individual Retirement Accounts are special, tax-advantaged accounts that help people save for retirement.

Due to their safe, predictable returns, CDs are popular among people who are saving for retirement.

TIAA Bank lets you open CDs in both Roth and traditional IRAs, combining the benefits of IRAs and CDs.

When you make a contribution to a traditional IRA, you can deduct the amount you contribute from your income when you file your tax return. That means that you’ll have a smaller tax bill or a larger refund at the end of the year.

Money that you contribute to a Roth IRA is taxed as usual when it goes into the account.

When you make withdrawals from a Roth IRA, you pay no tax on the principal or earnings. That means your money can grow tax-free.

When your CD’s term ends, your CD is said to have matured. When a CD matures, you have the chance to make withdrawals and changes without paying a fee.

TIAA Bank offers a 10-day grace period from the day that your CD matures. You can make changes or withdrawals at any time during this period without paying a fee.

After the 10-day grace period expires, your CD’s balance will be rolled into a new CD with the same term. You’ll have to wait for the new CD to mature before making a withdrawal.

TIAA Bank offers some of the best CD rates but comes with huge minimum deposit requirements.

If you can meet the minimum deposit, you’ll do well with a TIAA Bank CD, but you might not have that much money to commit. If that’s the case, you’ll have to look at another bank.

When comparing CDs, start by comparing the interest rates of the CDs. All else being equal, choose the highest rate.

If you can commit that much money, look to other online banks.

They also offer great rates and most have much lower minimum deposit requirements.