“Don’t tell anybody. Don’t let anybody know about this because if people find out, they’re going to want your winnings or they’ll throw you in a nursing home.” 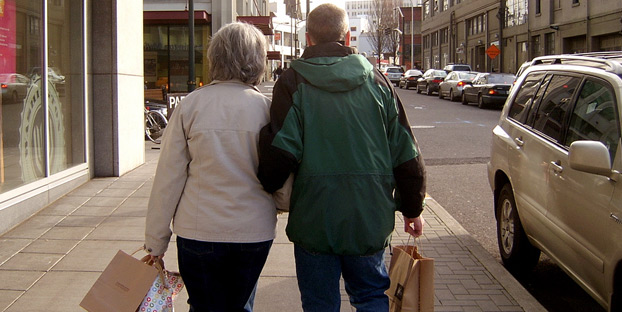 That’s what scam artists told Linda Lengyel’s mother, Ruth, when they coerced her into funneling away thousands of dollars into their bank accounts. In many ways, Ruth was the perfect target for the scam artists. She was elderly, lived alone in Baton Rouge, La., and had limited social contacts.

Like many other elderly victims of financial abuse, Ruth fell for a common money-grabbing scheme. To claim a prize, she would have to make a payment. Only the payments never ended, and she would end up draining her savings and checking accounts. Once her own savings was gone, Ruth took out cash advances with credit cards, lied to friends and family to get loans, and even sold some of her property. Just one more payment, they would tell her.

“They were ruthless,” says Lengyel. “They told her a lot of things to turn her against me and anybody else that would try to question what she was doing,”

Exacerbating the problem, Ruth began to experience health issues and suffered a heart attack in 2003. After recovering, she continued to work — well into her 80s — as an insurance agent to keep up with the mounting bills — and payments she had to send to scam artists. Just one more payment until she would receive her prize.

“I knew something was going on, but I didn’t know what,” says Lengyel, who lived thousands of miles away from her mother in Buffalo, N.Y.

Elder financial abuse is a severe problem that affects one out of every 20 older adults, according to the National Adult Protective Services Association. Experts say that the numbers are even worse because elder abuse is an underreported issue. Only one in 44 cases of financial abuse is ever reported. According to some reports, victims of elderly financial abuse have lost as much as $3 billion in total.

The problem has grown to such a severe level that in 2012 the White House announced a new concerted effort to target financial abuse against older Americans. Then Health and Human Services Secretary Kathleen Sebelius announced that a $5.5 million grant under the Affordable Care Act would be used to create a federal elder justice coordination team, though it’s unclear how much progress has actually been made creating the council.

The announcement came nearly two years after the Elder Justice Act, the first comprehensive legislation to address elder abuse, was enacted into law. The act provided grants to state and local agencies to create awareness programs, educate the community, and train law enforcement personnel on types of abuse, scams and fraud experienced by the elderly. Before the act, federal funding for elder abuse programs and justice regulations were not available.

Lengyel says perpetrators of financial abuse are not only out to gain money, but also control. There is a pattern to these scams, she says. At first, the scammer is extremely friendly and takes interest in a victim in order to gain information. They want to be become a victim’s best friend. Then, the scammer attempts to gain the victim’s trust. Once that happens, the bullying, scare tactics, threats, and emotional control begins. Add dementia to the list, which Ruth suffered from, and it’s easy to see how a situation can spiral out of control.

“The best way to help protect an elder from financial abuse: communication,” says Karen Campbell, a geriatric care manager who spent seven years as an Adult Protective Services caseworker in Massachusetts. “No one is immune from abuse.”
Campbell says signs that financial abuse may be occurring include an elder suddenly not having enough money to pay their bills, shut off notices arriving in the mail, collection calls, and when an elder doesn’t participate in activities that they previously enjoyed.
“Any change of behavior should be looked into — it is often a sign something is wrong, whether it be financial abuse or health changes,” says Campbell. “Keep in contact with your loved ones.”
Recognizing financial abuse is one thing, helping a proud elder come to the realization that they are suffering from manipulation without making them feel embarrassed is another. Lengyel attempted to help her mother by calling every single law enforcement agency she could.
“I went through the local sheriff, local police, state sheriff, state police, the state attorney general’s office, the FBI, the Justice Department and the Secret Service,” says Leyngel.
None of them offered much help. Lengyel attempted to help her mother financially, buying her condominium and paying off some of her medical bills. But she quickly realized the severity of the problem and tried to take legal control.

In 2006, Lengyel was granted an interdiction, a legal arrangement where a person who has been declared incompetent to care for his or her own affairs loses decision-making powers. An attorney was appointed to oversee Ruth’s decisions, as Lengyel flew back to New York.

The financial problems Ruth faced were massive. Credit card companies were after her to pay for thousands of dollars, which sat collecting interest with each passing day. Her condominium was in foreclosure because she hadn’t paid the mortgage in 18 months. And the IRS, looking for payment on back taxes, wanted their share of the financial pie.

Lengyel says the attorney only protected bigger assets. He restricted Ruth’s ability to sell property and get into her annuity accounts, but he still gave her access to some sources of income. All of it went to the scam artists. Even worse, Ruth turned to the very con artists pocketing her money for advice on what to do about the interdiction.
“Of course the con artists were telling her not to talk to me,” says Lengyel. “The games that they play are just amazing.”
Lengyel says the scam artists told her mother not to tell anyone about what she was doing otherwise she would lose her winnings or get thrown into a nursing home. In 2007, the attorney went back to court and the interdiction was overturned.

A license to steal

Broke and drowning in debt, Ruth passed away in 2011, six years after her father died. Dealing with her mother’s financial issues, Lengyel didn’t know that her father, John, was also falling victim to elderly financial abuse.

John’s story is another classic elderly financial abuse tale, only this time he fell prey to someone he trusted, a neighbor. Lengyel says the neighbor conned her father into getting access to his investments. Little by little, as John grew to trust the con artist, she took money away from him. The con artist was so adept at manipulating John, Lengyel claims, that he even began to distrust his own daughter. Once John passed away, Lengyel was shocked to find all the assets in his will were left to the con artist instead of her.

Campbell says the abuse John suffered is perhaps the most frustrating of all because if an individual is listed on an account or gains power of attorney, they can legally withdraw all of the elder’s money.
“In the protective services world, we often refer to it as a “license to steal,’” says Campbell.
Now Lengyel is left to pick up the pieces of the financial mess her mother left behind. She says she is focusing on dealing with the IRS first, then will tackle what to do with the condominium, which has a tax lien on it. In all, Lengyel estimates she has lost around $200,000 dealing with the financial abuse her parents suffered.
“I lost all my family money because of elderly financial abuse,” says Lengyel. “Nobody deserves this, especially at the end of life when all your hopes, dreams, life’s ambitions and self-respect are stolen from you.”
Lengyel says she hopes sharing her story will help save other victims from suffering the fate her parents did.
“It can happen to anyone,” she says.

Related Articles
Sending Money Is Getting Easier for U.S. Bank Customers
How to Maximize Your Relationship With Money
The Best Ways to Fix Your Holiday Debt Mistakes
Choose a Credit Card Based on Your Lifestyle
IRA Contribution Tips to Help You ‘Catch Up’ on Retirement
Important Decisions to Make When Picking a Bank