Why Do CD Rates Vary By State?

Savers may often wonder why certificate of deposit (CD) rates can change depending on their ZIP codes and/or state. Find out why the rates may differ by market. 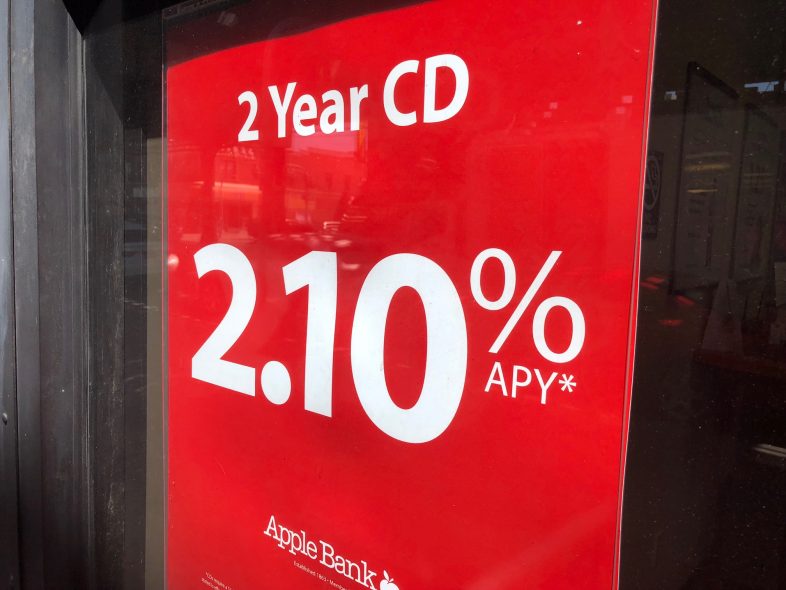 A certificate of deposit, or CD, for short, is a bona fide way to save money if you’re looking for an account that offers high interest that stays fixed, for a fixed period of time, without the ups and downs and lowly APYs found in most other savings products.

So when you go to your preferred bank or credit union’s website and look for a certificate of deposit, you'll realize that most often, it’ll ask you to type in your ZIP code before you can proceed.

(Looking up CDs for this article, I was asked for my zip code by Chase, Wells Fargo, PNC Bank, Ally Bank and others.)

Banks, especially those of a big, national presence, want to know your home state — and more precisely, your region — because your CD rate may change based on where you live.

On one hand, this might not seem fair to someone who lives in a state where CD rates are lower, and great for someone where rates are higher, not to mention that some state might get special CD terms.

The truth is that there are endless reasons why CDs may differ rate to rate, from state to state.

CD Rates, from State to State

CD rates may range from bank to bank but those same interest rates may vary from state to state, too — even when it’s through the same financial provider.

One of the next highest current CD rates in the country is a 1.53% APY in Vermont for a 12-month CD. Yet right next door in Massachusetts, the same 1-year CD carries an average 0.98% interest rate. New York’s average CD rate for the same length account is 1.07%.

By the same token, open the same 12-month CD in Wyoming, and you might lock into a 1.37% interest rate, but a bank for the same CD in neighboring Idaho, and a 1.08% may be the best rate there is.

Just a couple of states over, Washington and Oregon carry some of the lowest 1-year CD rates in the nation: 0.86% and 0.87%, respectively.

That’s more than an entire percentage point for the same CD product, from the highest interest rate to the lowest, with some of the biggest differences found directly across state lines.

That begs the question, why does one state have higher rates than others?

Do other rates in neighboring states vary because of some special influence?

Why CD Rates Vary by State

“There is no one factor that dictates CD rates,” says Marshall Armond, CEO of Credit Revo.

According to Andrew Becks, chief operating officer for 301 Digital Media, banking competition plays a big role in the variance of CD rates from one state to another.

“While it's changing with the emergence of more online CDs and banking offerings, in many cases, banks and credit unions are sensitive to price competition within states and individual markets,” he says. “Oftentimes, there is less competition in smaller markets, so rates can be set lower and still be competitive than in larger markets.”

“To a certain degree, what banks do is driven by what a competitor does,” Armond adds. If another bank had higher rates on CDs, then that bank notices a drop in how many CDs are being signed up for at the bank. They may adjust the rate to match or beat the competitor.”

Armond notes that the demand for loans in a particular market, for one, can affect CD rates, even though one product is for borrowing, another for depositing — two entirely different interest rate structures.

“How much demand for loans at the bank, and region, will depict how much demand it has for deposits, which will impact CD rates,” he says.

Essentially, when banks want to gather funds, they may raise CD rates to attract new depositors, and lend those deposits out. To accomplish this, banks will need to calculate the best, most competitive APY they can offer to cover that loan demand, and their profit margins. (This could benefit you if you’re looking to use as a CD to save for a home down payment.)

In this case, banks may raise their CD rates as a marketing tool.

“Sometimes, banks will use higher interest rates on CDs as a loss-leader strategy to grow other business lines — mortgages, checking, savings, etc. — and, as is the case, this can vary by state to state based on competition for new customers,” says Becks. “This can also be used to grow new customers to hit investor or marketing goals related to new customer growth.”

For these types of strategies to work, banks will need to pay close attention to the interest rates offered by competing banks in other states. Rate environment or local economy may play a huge part. Economies from state to state may encounter their own unique situations that manifest themselves through interest rates.

Say that banks, collectively located in one state, follow a trend of raising money for mortgage loans, in a part of the country where property values are high.

To raise that money through deposit accounts, CD rates will need to reflect that.

But in states where property values are lower, raising capital for mortgage loans may not be a high priority for banks and lenders, nor will the need to boost their CD rates to generate that revenue.

Since CD rates can differ so greatly from state to state, region to region, and bank to bank, it pays (literally) to make a plan to find the best CD right for you.

You’ll be selling yourself short depositing money into the first CD you find when a better one might be one bank or online click away.

Keep some of these tips in mind:

Open a CD with a credit union or online bank

The traditional brick-and-mortar bank that you or your family has been doing business with for years may, like other banks, face a challenge.

Due to its virtual presence, an online bank without any physical branches hardly encounters any of these costs, and can deliver much more attractive CD rates — and they often do so regardless of your state of residence.

If you still prefer the in-person, customer-service touch, consider banking with a credit union.

Unlike banks, credit unions are not-for-profits with no shareholders to please.

Thus, the revenues credit unions earn from loans and deposit products are returned to you, the customer, in the form of higher interest rates — CDs included.

Yes, depositing into a 5-year CD vs. a 1-year CD means having to lock away your funds for four years extra, but the sacrifice means you’ll benefit from a higher interest rate.

The longer you keep your money on deposit, the better the interest rate as a reward. Here's an example of a CD lineup from an online bank:

Sometimes, it’s not about getting the highest rate you can find right now, but maximizing your yield potential that counts most when saving with CDs.

Take CD laddering: open up several CDs, of varying lengths, and as each one reaches maturity, roll your earnings (with interest) over into a new CD.

The idea is to earn enough to afford CDs with higher minimum deposits that carry higher APYs, such as jumbo CDs calling for minimum opening balances of $50,000, on average.

Standing between your typical savings account on one end, and savvier, high-yield investments on the other, CDs bridge the savings gap, accessible to anyone, but offering better, more superior returns on your deposits.

So even if you’re lucky to live in states like Alaska, New Mexico or South Dakota, where CD rates are currently at their highest, stay financially aware before setting down a deposit for six, 12, 24, or even 60 months.

Remember to first prioritize your savings and have an emergency fund of three to six months first in a savings account before investing in a CD.

Also be mindful of CD rules and regulations. Early withdrawals of your principal or interest can trigger penalty fees (usually a portion of your earned interest), so don’t open a CD unless you’re positive you can wait until the maturity date to withdraw your funds.

By shopping around for the right CD and the right rate, a long- or short-term CD is one of the best savings vehicles you can have, no matter what your state’s average interest rates are.