Online checking accounts from Ally Bank and Capital One 360 are among the most popular accounts from online banks. Find out which one is better.

Are you sick of your bank’s boring, fee-riddled checking account? Maybe that’s why you ended up here, looking for a new checking account that will make your life easier.

Among your top considerations are should be Ally Bank’s Interest Checking and Capital One’s 360 Checking -- two of the most popular online checking accounts around.

But, picking between the two online checking accounts may be a rather confusing task. After reviewing the accounts, I help you to decide the better one for you.

I looked at the following factors while analyzing the accounts:

Say goodbye to constant threat of monthly fees from traditional checking accounts. You know, that fee you keep getting charged with month after month because you didn't keep a certain account balance or posted direct deposits to your account.

Online banks, like Ally Bank and Capital One 360, are recognized for the ability to provide free checking accounts -- no cost of running branches means lower account costs for consumers like you.

So, with one of their online checking accounts, you don't have to deal with posting direct deposits or minimum balance requirements.

Since they’re on an even playing field, in terms of monthly fees, I’ll call it a tie.

If you thought no monthly services fees were great, be prepared for more. The online checking accounts from Ally and Capital One 360 also allow your deposits to earn interest.

You won’t find this combination with any of the major traditional banks. Even most big-bank savings accounts, such as Bank of America's Regular Savings account, pay just 0.01% APY (close to nothing).

With Ally and Capital One 360, you're getting a checking account that earns more interest than a big-bank savings account -- mind-blowing, to say the least.

Looking at the interest rates from both accounts, you can see that Capital One has the potential for a higher interest rate. But, you also have to deposit a higher amount to receive that interest rate.

It is unlikely for most people to keep $50,000 in their checking accounts. Then, even if you do have $50,000 lying around, it would be smarter to put all that cash in an online savings account that is likely to earn more interest.

The lower deposit threshold of Ally’s Interest Checking account is what helped it win this category.

When checking accounts are involved, overdrafts often enter the conversation.

Far too often do people spend a little too much (causing a negative balance), and end up paying a lot in fees. At an average overdraft fee of $35.20, that's about $250 per year in overdraft fees.

You definitely want to avoid paying these expensive overdraft fees and both online banks help with that goal.

Ally will offer to automatically transfer funds from a linked Ally savings or money market account in $100 increments to cover an overdraft. At most banks, this “overdraft protection transfer” comes with a fee. At Ally, it’s free.

Capital One 360, on the other hand, does not provide overdraft protection through a linked savings account. Instead, you get a creative solution for overdrafts: an overdraft line of credit.

Basically, you’ll borrow the excess amount under an interest rate. Sure, that rate will probably be a little higher than what you’ll get from the best low-interest credit cards, but it is immensely better than paying a pricey overdraft fee.

Comparing the two overdraft protection programs, I just have to commend Capital One 360 for its overdraft line of credit -- it is simply more convenient and less expensive.

Ally Interest Checking: Up to $15 in ATM fees are reimbursed at the end of every month

If you use an out-of-network ATM five times per month, you'll pay about $300 per year in ATM fees!

With an online bank, you're definitely going to cut down on these ATM fees.

Capital One 360 Checking customers have surcharge-free access to an expansive network of partnered ATMs, which is already much better than the ATM access offered by traditional checking accounts.

Ally’s ATM fee policy is even more superior -- your ATM network includes, essentially, any and every ATM in the country, plus the bank ATMs that you are already using. You’ll get charged with the ATM fees, but Ally just refunds up to $15 of these fees per month -- likely to be more than you need.

How can you argue against an ATM-fee reimbursement policy? Ally wins here -- you can end up avoiding ATM fees altogether.

Although paper checks are slowly going out of style, they remain a trusted payment method for many Americans. In case you ever need it, it’s good to have a checkbook ready.

Ally offers unlimited free checks, which is hard to beat. Meanwhile, Capital One 360 charges per checkbook after the initial 50 free checks. Honestly, 50 checks will probably last you quite some time.

But, the unlimited free checks from Ally is always better. (A big bank is likely to charge more than $20 for a box of checks.) 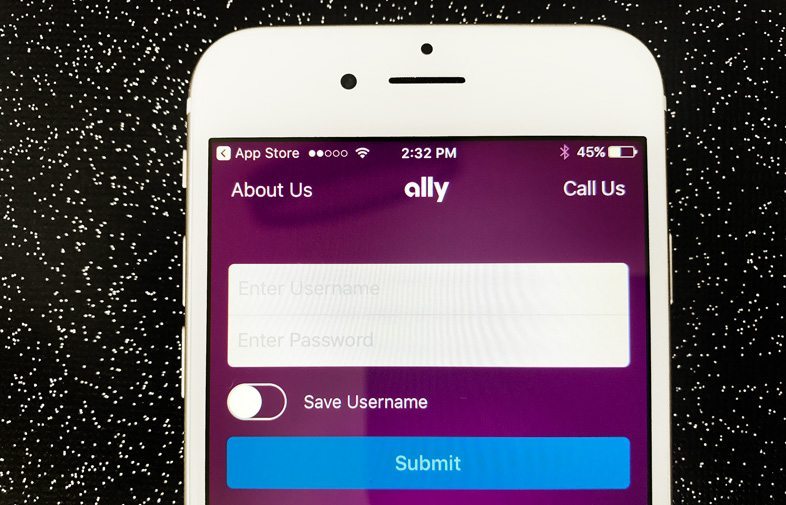 Without physical branches, your smartphone will become your primary method of interacting with your online checking account.

So, you’d want a mobile banking app that is capable of carrying out your most common transactions, such as paying bills and transferring funds.

However, these apps can do much more:

In the past years, the Capital One 360 mobile app had far more features than Ally Bank’s mobile app.

However, it appears that Ally has caught up and went on to have a slightly better mobile banking app -- as seen by the higher mobile deposit limits and support for the Windows mobile platform.

Although the Capital One 360 Checking did put up a good fight, the Ally Interest Checking account is clearly the better overall choice if you’re looking for a new checking account.

It has a great combination of low fees and convenient perks to ease the process of ditching your traditional checking account.

On MyBankTracker, Ally Bank has an A+ rating for its solid bank health, low fees and comprehensive mobile banking features. (See how Ally Bank compares to Capital One 360 with MyBankTracker’s bank comparison tool.)

<p>I already have Vantage credit cards with Cap 1, and I LOVE their security and anti-fraud practices. Isn't there an advantage to a checking account at the same bank where my credit card is?</p>

<p>Josh, thanks. I know that many people will certainly have a preference, especially when Capital One 360 offers in-branch service (albeit very little).</p><p>I omitted cash-deposit capability because I felt that it wasn't a major factor that would sway one's decision. But, in the case of your wife, there are still people who want that ability -- we'll definitely make a note to include that in future updates of this popular account comparison.</p><p>As for the "one easy answer" that you're looking for, you may want to check out Radius Hybrid: <a href="http://disq.us/url?url=http%3A%2F%2Fwww.mybanktracker.com%2Fnews%2Fradius-bank-new-best-online-checking-account%3Al6bnwvtGeC5t_BW30E4UKqvAtJo&amp;cuid=15643" rel="nofollow noopener" title="http://www.mybanktracker.com/news/radius-bank-new-best-online-checking-account">http://www.mybanktracker.co...</a></p>

<p>Great article! Really trying to find out what works best for my new wife and I on a joint bank account. One thing that should be included in the list (not just because it affects me heh) is cash deposits. Ally does not in anyway allow this. 360 (Keep thinking I'm talking about an XBOX here) does, IF there is a old Capital One Branch close by. The branch can also give you limited help with your 360 account (like cash deposits). My wife makes a lot of tips and family mostly gives us cash for occasions and I like it in the bank so it's easier to budget. I can't think of the last time I used an ATM, so even though not having to worry about it is nice, going through the refund policy with 360 twice a year if that seems viable to me.</p><p>360s multiple savings account seems to make an easier way to have an emergency fun and for us to save for a house... but man those Ally interest rates are super hot! Wish there was just one easy answer!</p>

<p>Hi Dustin, thank you for sharing your thoughts with us! It's great that you have an investment strategy in place where you are gaining a decent amount from interest. I think how much and where a person decides to stash their cash really depends on lifestyle. I've heard of people keeping 2 years' worth of cash readily available in case the market takes a sharp turn or a job loss occurs.</p><p>I agree with you on Ally. Their ATM reimbursement policy is so convenient! I honestly don't know why everyone doesn't have an Ally account, just to avoid ATM fees.</p>

<p>This is a nice breakdown, but personally I don't ever keep more than 2 months worth of expenses in my checking account. Anything beyond that would go to savings or an EFT investment account where I would get much better than even the top tier interest rates both of these banks are offering.</p><p>With that in mind, I feel like Capital One's 0.2% interest rate on balances under $50,000 is a better deal. Keeping balances over $15,000 in checking seems kind of silly to me, even with the 0.60% interest rate Ally is offering, your money is much better served in a high yield savings, money market, or investment account. I just think that's a point worth mentioning. A checking account should really be seen as a vehicle for having instantly liquid money, and there's no reason to keep more than what you need to cover 2 months of expenses in it. A nice interest rate is a bonus, but you're losing money by not having that extra money in an account with better interest than these banks are offering on their checking accounts.</p><p>BUT, I still feel like Ally's ATM network pushes them over the top. To be able to get cash at any ATM, no matter where you are is a HUGE perk. Just think of how many times you've been with friends and when they need to get cash, you have to drive out of the way to get to one of their banks ATM's so they don't have to pay fees. I like Capital One's overdraft protection a lot more, but if you're even remotely responsible with your money you'll never overdraft anyway, so to me that doesn't really factor in to my decision.</p><p>Long story short, I don't necessarily agree with every point here, but I still agree that Ally is the better choice overall.</p>