Making mistakes is a part of life but when it involves money, the fallout can be costly especially when it comes to family. 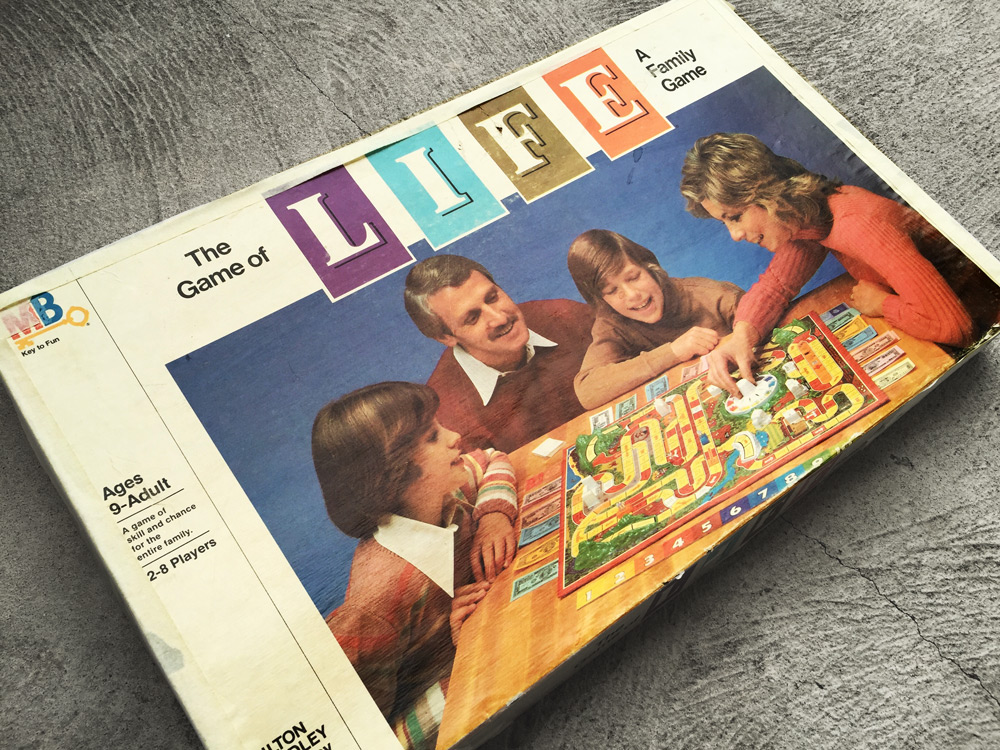 Making mistakes is a part of life but when it involves money, the fallout can be costly. While some missteps are minor, others can take years to recover from and it’s not just your finances that can take a hit. In some cases, it’s your personal relationships that suffer as the result of a money fumble.

MyBankTracker conducted a survey to gauge what Americans’ biggest money regrets are. The response choices covered a range of common financial slip-ups, involving everything from student loans and home-buying to saving for retirement and taxes. We also gave respondents the opportunity to chime in with comments on money mistakes that we didn’t specifically mention.

Who regrets lending money the most?

17% of survey respondents said they’d had a bad experience with lending money to a friend or family member. When broken down by age, 34% of respondents who said this was their biggest money faux pas were aged 65 or older. In terms of income, 20.3% of our respondents reported earning an income between $50,000 and $74,999 annually. Another 18% reported making between $25,000 and $49,999 a year. That makes sense since lending is likely to be more financially problematic for someone who’s making less money. 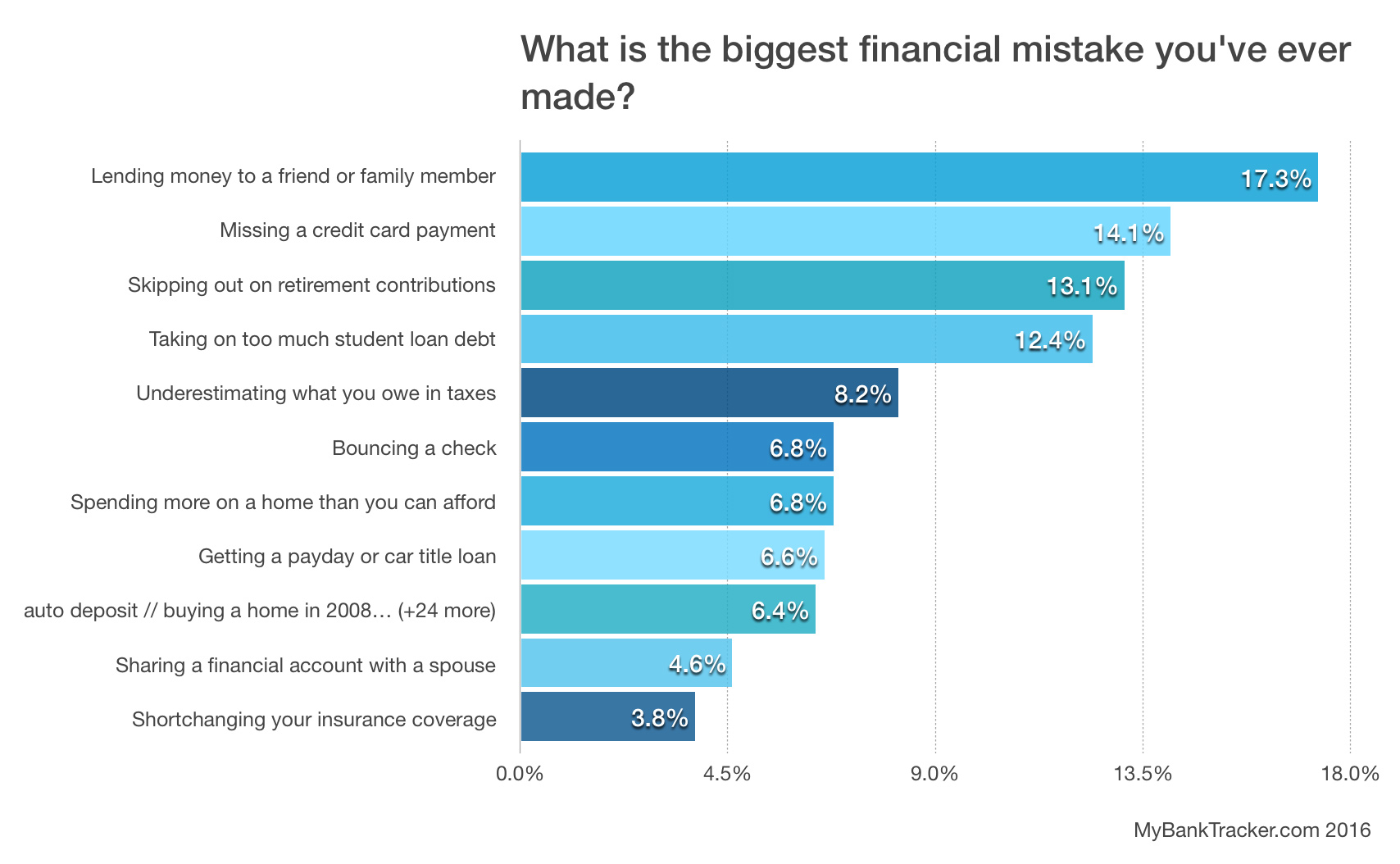 Interestingly, MyBankTracker found that 18.1% of women versus 15.6% of men felt that lending money was a mistake. A 2014 research study from George Washington University suggests that women tend to trail behind men in financial literacy and be less confident about managing their money, which may account for why the women in our survey were more likely to view lending to friends and family negatively. It also echoes the results of a recent study from the UK, which found that women on average are twice as likely to let their feelings take charge where money is concerned.

Why is lending money to someone you know such an issue?

Granting a loan to a friend or family member is problematic because it changes the nature of the relationship by making one person “the lender” and the other “the borrower” says Chris Hammond, a financial advisor with Retirement Wealth Advisors.

“The person who’s lent the money feels slighted when he doesn’t get repaid but sees the person who borrowed the money spending money on other things. It becomes an issue of, if he’s got money for that, why can’t he pay me back? The borrower, meanwhile, always feels like his friend is holding something over his head and he’s right,” says Hammond.

Aside from the interpersonal dynamics that are at work, there are also the different emotions that come into play when money is involved. Depending on where you’re at financially, money can be a source of anxiety, stress, fear, frustration or anger, all of which can cause a relationship to go south.

Valerie Rind, the author of Gold Diggers and Deadbeat Dads, has made a career out of chronicling the dangers of lending to friends and family and she knows firsthand how emotions can run the gamut where money is concerned.
“Money is never impersonal,” Rind says. “We all have strong feelings about it based on how we were raised and our experiences with it. When you combine your financial relationships with your close personal ones, you’ve got an explosion waiting to happen.”

If you’re able to completely detach emotionally from money, then lending money to your best friend or helping your nephew buy a car may not be such a big deal. That, however, is much easier said than done.
One of the biggest mistakes people make when it comes to lending money is failing to establish emotional boundaries going in. Without that line in the sand, it’s easy for either the lender and the borrower to end up with hurt feelings and that’s what ultimately destroys the relationship.

How to make loans to friends and family the right way

If a friend or family member approaches you for a loan and you just can’t say no, you need a plan for keeping your finances (and the relationship) intact.

We’ve put together a brief best practices guide for lending money to people in your inner circle:

1. Have an exit strategy.

Before you hand over the goods to a friend or loved one, you need to be clear about all the possible outcomes. Attorney David Krekeler, who handles cases involving debtors and creditors, recommends running several “what-if” scenarios prior to making a loan.

For example, what would happen if the person you’re loaning the money to lost their job or got sick and couldn’t work? How would the loan be handled if they had to declare bankruptcy for some reason? Looking at all the possibilities puts you in a better position to decide whether you should even be loaning the money in the first place.

If you got to a bank for a loan, they’ll ask you to sign a written document acknowledging that you’re obligated to pay back what you borrow and it shouldn’t be any different when you’re lending money to someone close to you. Certified financial planner, Jeff Jones of Longview Financial Advisors, Inc. advises clients who are lending money to spell out the details of the loan, including the payment schedule, the interest rate if applicable and what your options are for recovering the money if the borrower doesn’t pay up.

While you can create your own DIY loan document, you may want to consider bringing in an attorney if the loan involves a sizable amount of money. One other thing to keep in mind is that if you don’t charge interest on the loan, the IRS might consider the money to be a gift. If for some reason, they don’t pay it back you wouldn’t be able to write it off as a bad debt on your taxes.

The odds of someone repaying a personal loan increase when they’ve got a stake in the outcome. Asking your friend or your sister or whoever it is that’s borrowing the money to bring some kind of collateral to the table, such as a piece of jewelry or the title to a car, may be uncomfortable but it gives you a degree of security so you’re not left high and dry if they renege on the loan agreement.

If you’ve taken the time to write out a loan agreement or spent money having an attorney or a financial planner help hammer out the details, you need to make sure that repaying the loan remains a priority for the borrower. When they pay late or miss a payment and you don’t say anything, that opens the door to even more bad behavior where the loan is concerned. “If they don’t pony up,” says Rind, “don’t be afraid to remind them.”

5. Don’t lend what you can’t afford to lose.

This is probably the most important rule to remember when lending money and it’s the one that’s most often overlooked. Edwin Draughan, Associate Wealth Advisor at Strong Wealth Management, LLC recommends approaching the situation with a mindset of giving, rather than lending. If you wouldn’t feel comfortable giving a friend or family member the money, he says, then you definitely shouldn’t be comfortable lending it.

Making loans to friends and family isn’t the only money mistake Americans are recovering from.

Here’s what else our survey uncovered:

Shortchanging retirement is a major source of financial pain

Just over 13% of respondents said that skipping out on making retirement contributions has come back to haunt them. More than a quarter of respondents who chose this as their number one financial mistake were between the ages of 55 and 64, with retirement looming on the horizon.

Student loan debt is an all-time high and 12.4% of respondents total to put this at the top of their financial mistake list. New grads were the most likely to have second thoughts about taking on too many loans but 45 to 54-year-olds were right on their heels.

Some Americans still have trouble getting their taxes right

Owing money to the IRS can be stomach-churning, to say the least and 8.2% of the people who took part in our survey said they learned the consequences of underestimating their tax liability the hard way. Higher-income earners were more likely to make this mistake and 25% of respondents who underestimated their taxes reported an income ranging from $100,000 to $149,999 annually.

As part of our survey, we gave respondents a chance to leave an open-ended response. One of the most surprising answers to the biggest money mistake question? Raising kids.

This nationwide, online survey was conducted by Google Consumer Surveys for MyBankTracker between February 11-12, 2016. A total of 502 people responded to the questions in our survey. All respondents were 18 or older. Finally, 49.4% of responses came from men while the remaining 50.6% came from women.