Election season is in full swing but our future looks bleak, with 17% of our respondents predicting they will be poorer with Trump in power.

Election season is in full swing and Donald Trump has managed to score some important victories along the campaign trail. MyBankTracker recently conducted a nationwide survey asking Americans whether they thought they’d be better or worse off financially in four years if the Donald were to make it into the White House. 17.4% of our survey respondents predicted that they’d be poorer if Trump were to be elected. Dive in with us as we break down the survey findings in more detail.

Women, seniors more likely to be pessimistic about a Trump presidency 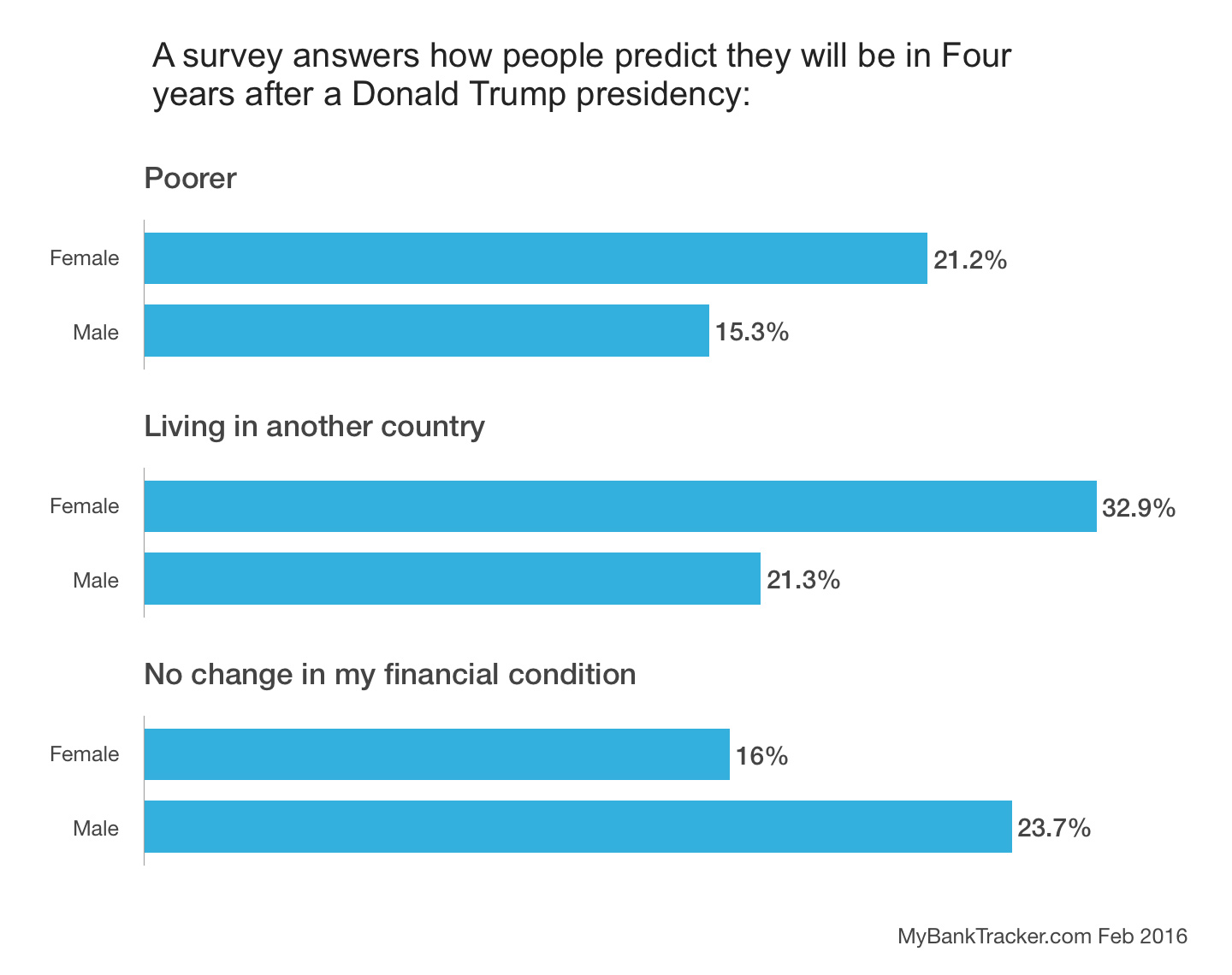 As far as the general outlook for the country as a whole goes, the gender gap persisted, with men taking a more optimistic approach. 17.6% of men said that if Trump were elected they’d feel good about where the country is at four years down the road but only 10.2% of women agreed with that statement.

21.9% of Americans aged 65 and up felt that having Trump at the helm would leave their bank accounts worse for wear. That mirrors a general concern that many seniors have about their financial outlook. For example, a recent poll by the Associated Press-NORC Center for Public Research found that the future of Social Security is a pressing concern for 85% of Americans.

6.7% of respondents said they’d be worried about their job if Trump were elected, which is interesting considering how many more people said they’d be poorer. Women were only slightly more likely than men to feel this way, with 7.5% saying job stability would be a question mark versus 6.5% of their male counterparts.

Not surprisingly, millennials said they’d have the most concerns about their job situation under Trump. 8.8% of 25 to 34-year-olds who responded to our survey said this was their biggest fear and for good reason.

While the national unemployment rate has dipped to 4.9%, the effective unemployment rate for 18 to 29-year-olds is 12.8% according to Generation Opportunity, which publishes a monthly millennial jobs report. Although the nation’s workforce has expanded steadily over the last few years, grads are still having a tough time finding their footing in a competitive job market. Many millennials who are able to land a gig aren’t cashing in on a big payday, thanks to stagnating wages.

27.8% of our survey respondents said that if Trump were elected President, they’d be living in another country four years from now. That’s not exactly a vote of confidence in terms of how some Americans view Trump’s ability to be an effective commander in chief.

Once again, it’s women who seem to hold a less than favorable opinion of Trump, with 32.9% of female respondents opting to head elsewhere versus 21.3% of men. That echoes what’s happening in terms of Trump’s popularity among male and female voters. A Fox News poll conducted in December found that 46% of men backed Trump compared to 30% of women.

High-income earners were overwhelmingly in favor of packing up and heading to another country if Trump were elected. 80% of survey respondents who reported earning $150,000 or more annually said they’d go as far as relocating to preserve their financial health.

Roughly 20% of respondents expect to maintain the status quo

20.2% of people who participated in our survey said they didn’t think their financial condition would change significantly with Trump as president. In terms of who’s most likely to feel that way, men had the edge. 23.7% of males said their finances would be the same in four years but only 16% of women agreed.

A higher income seemed to correlate with a more positive view of this particular question. 29.2% of respondents earning between $100,000 and $149,999 said they didn’t foresee any major financial upheavals four years down the road. Only 18% of people bringing in between $50,000 and $74,999 said the same.

Moving to another country is a bit extreme but we were surprised as to how many people said they’d pack their bags. We also included an open-ended question in our survey to allow respondents to chime in with their thoughts on a Trump presidency. While the responses varied widely, many of the survey participants expressed fear over where the country would end up after four years under Trump’s leadership.

Whether or not those fears have a foundation is up for debate. Trump’s net worth has been estimated at anywhere from $3 billion to $10 billion so obviously, he knows a thing or two about making and investing money. On the other hand, he’s declared bankruptcy no less than four times since 1991 so he doesn’t necessarily have a perfect track record for making great financial decisions.

So what’s the takeaway for Americans who are worried about ending up broke if Trump walks away with the vote? While it’s impossible to predict the outcome of the election or where the country will be four years from now, there are some things you can do to insulate yourself if things go south. Focusing on these action steps can go a long way towards securing your financial future:

Open an online savings account and commit to setting aside a specific dollar amount on a weekly, biweekly or monthly basis. If you’re expecting a big tax refund, you could use some or all of that money to grow your emergency fund faster. Set a goal of saving a minimum of $1,000, then work your way up to a full months’ worth of expenses. From there, you can increase your target to between three and six months’ worth of expenses. Whether you’re saving large chunks of cash or just a few bucks every payday, consistency is the key.

Consider a balance transfer to save on credit card interest or refinancing your student loans to get a better rate. Focus on paying down the debt with the highest rate first if you want to knock even more off the interest total. The faster you get rid of the debt, the more money you’ll save and the fewer financial worries you’ll have regardless of who ends up as president.

Using a budgeting app like Mint can take a lot of the headaches out of the process. Mapping out a budget and trimming out those unnecessary expenses allows you to streamline the amount of money you need to live on. If the country were to experience another economic downturn, being able to get by on less could make the difference between thriving and just surviving.

Aim to chip in between 10-15% of your income to your 401(k) if you have one. If you can’t hit that target, make sure you contribute enough to at least get the company match. If your employer doesn’t offer a retirement plan, you can still save through a traditional or Roth IRA. A Health Savings Account is another tax-advantaged option if you’re serious about building wealth for your golden years.

This nationwide online survey was conducted by Google Consumer Surveys on behalf of MyBankTracker. A total of 1,000 people responded to the questions in our survey. All respondents were aged 18 or older. 52.6% of respondents were men and 47.4% were women.