My Foreclosure House: How I Began Fixing Up My Home 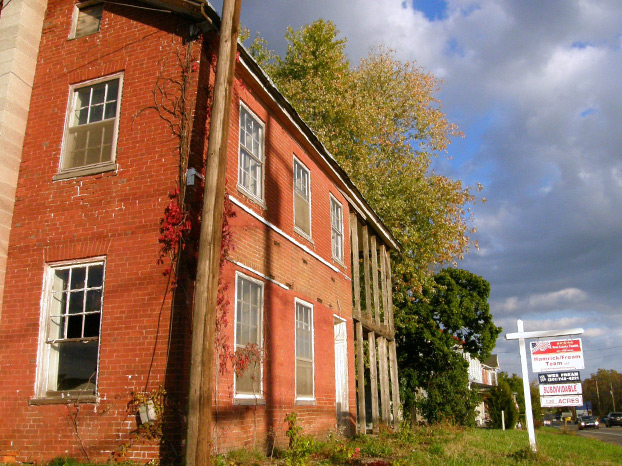 When I left off in this series, I got the keys to my dream home that I bought on foreclosure. I was the new owner of a home with no mortgage, however, I was faced with a two-family house that needed a lot of work and a lot of appliances, and my income, while pretty good, was unpredictable. I didn’t want to start racking up major credit debt, because that is a recipe for trouble for me, especially with an income at the time that varied considerably with seasons and sometimes, week to week.

Furnishing and renovating large house with two apartments is a daunting task. New refrigerators and stoves cost around $500 or much more. A new furnace can cost well in excess of $800, and this place, having two apartments, also had two furnaces.

The paint all over the very large exterior was peeling everywhere, and the most minimal job on a 2.5 story Victorian house could cost $5,000 or more, (just for the paint). This doesn’t include paint for any other problems like rotted wood or gutter damage.

The front porch needed work. Dozens of other small tasks, like changing the locks, needed to be done. Just coming up with a priority list was overwhelming.

Problems with a fixer upper

At least my priorities were clear on the first day after taking ownership when the water was turned on. Because the foreclosed house had been vacant for over a year, the heat had also been off during a Buffalo winter. The water got turned on, and suddenly, the basement turned into a sprinkler. When the bank took over, they didn’t bother to winterize the house by draining the pipes before winter came along, and as a result the pipes froze and the seams broke open.

Luckily, through my job, I knew a plumber who was a friend of the business where I worked, and a friend of mine. He was happy to come over and take care of the situation for me. Also very luckily, there were already a few unused copper pipes laying around in the basement. These days, it’s hard to imagine no one would have broken in and stolen them for scrap, and I have no idea what costs are involved for a plumber to fix the situation, but I have no question it would have cost a lot more than I had sitting around at the time.

So far, I had done everything by the seat of my pants, and whatever was going to get done wasn’t going to happen on the timeline of my choice. I needed to develop some patience. No, actually, a lot of patience. Would I be prepared if another unforeseen problem like the leaky pipes popped up?

Sorting it all out

What I learned at this point is that I needed to get very serious about prioritizing my tasks and expenses. I made several lists to help me through this process. One list was comprised of my most expensive purchases, ordered from high to low. Another list ordered those same activities in terms of which were most crucial and which I most personally wanted.

Another list was a timeline for tasks and purchases. This one took many tries to come up with a realistic plan based on how long some tasks take to complete, or how long it would take to do them. With all lists, some degree of priority was given toward preparing the rental apartment for business so that I would be generating income form that.

For the items with high price tags, I thought about different ways to pay for each. I found a local appliance dealer which offered a layaway program with no interest, so I chose to get my appliances that way and put money down on them when I could.

Meanwhile, I put an equal or greater amount aside to pay for some of the larger items, and once the apartment was rented, that money was immediately earmarked for purchases or repairs. Once I got focused and organized, I was able to really make some big accomplishments.

How I Bought my Foreclosure: Part One

Is Foreclosure Ever a Good Idea?

Think Twice About Buying a Home in Retirement

Related Articles
6 Wasteful Spending Habits That Prevent You from Saving More Each Month
What Are Commodities Investment Stocks?
How You’re Easily Duped by Debt Settlement Companies That Don’t Seem...
5 Little-Known Facts About Credit Cards
How to Eat Rich When You’re Not. A 7-Point Primer on Cheap Gourmet Dining
What Kind of Insurance Do I Need Besides Medical?