One of the toughest transitions that many couples face after tying the knot is figuring out how to merge their money. That means working out a budget, setting some goals and deciding on a plan for tackling your debt. 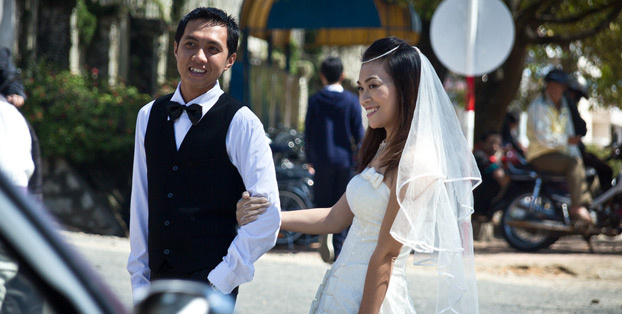 When one of you is staring down six figures in student loans, it can loom like a black cloud over your wedding day. It’s easy to feel overwhelmed, especially when you start thinking about how it could affect you as a couple in the long-term, emotionally and financially. If you or your future spouse is bringing a massive amount of student loan debt into the marriage, developing a strategy for dealing with it together can defuse some of the stress.

Addressing the elephant in the room may not be pretty but it’s a necessary evil if you want to get on the right track with the debt. That means adding up all the balances to find out what the final number is. If the loans have been in deferment or forbearance for awhile, the odds are good that it’s going to be higher than what you originally estimated, thanks to accrued interest.

Charlie Shipman, Managing Principal at Blue Keel Financial Planning, advises creating an account on Tuition.io to get the big picture on what you owe. “It allows you to aggregate your student loans to get the whole picture, track your balances and create a plan to pay them down,” Shipman says.

Seeing that final number might feel like a punch to the gut but you’ve got to be absolutely clear about where you’re starting from.

Once you’ve nailed down the total, the two of you need to have a serious discussion about how the debt payoff will be handled going forward. What that really means is deciding whether it’s going to be a team or solo effort.

For Money Crashers expert David Bakke, a joint approach makes the most sense. “If both parties are serious and commit to knocking this debt out once and for all, it’ll be possible to still begin planning for the future at the same time,” he says. The problem for a lot of couples, however, is trying to sort out the financial issues that go along with paying down debt from the emotional ones.

If you’re both going to get on-board with paying the loans, you need to be in 100 percent agreement on the terms. For example, if you make $80,000 a year and your spouse makes $30,000, will you pool your income and split the payments down the middle, or will each of you contribute a percentage based on what you make? Paying more for a debt you didn’t rack up because you’re the higher earner can lead to feelings of resentment so you need to make sure that whatever you decide on is fair to both of you.

Once you’ve settled on who’s going to pay the loans, the next step is working out the how. Depending on what kind of loans are involved, that may mean looking into income-driven repayment plans, loan forgiveness, consolidation or refinancing.

Income-based repayment, for instance, may be the best choice if your new spouse isn’t making a lot and the minimum payments are eating up a huge chunk of their earnings. This option is appealing to a lot of borrowers who have substantial debt because there’s the possibility of having some of the loans forgiven at the end of the repayment term. The problem is that whatever debt is written off will need to be reported as taxable income. That can add up to a pretty sizable tax bill if your payments on the IBR plan didn’t make much of a dent in the balance and you file a joint return.

Consolidating federal loans or refinancing private loans with a different lender could result in a lower interest rate and reduced monthly payments. If your spouse is planning a career in public service or a specialized field such as medicine or law, they may have the opportunity to effectively work off some of the debt by participating in a loan forgiveness program.

Michael Lux, an Indiana attorney who created Student Loan Sherpa to detail his own experiences with student loans, says the most important thing is to evaluate all of your options together. “If you’re just paying the bills as they come in each month, you’re likely spending way more than necessary. Putting together a plan of attack is the key.”

Look at the long-term

Even if you’re both making big bucks and throwing a huge chunk of money at the debt each month, six figures in student loan debt isn’t going to go away overnight. You and your partner need to be realistic about what that’s going to mean for your other goals. That could include delaying things like buying a home, starting a family or saving for retirement.

If the prospect of being weighed down by student loans is making the future look bleak, you may find yourselves wondering whether you should postpone the wedding entirely. Ultimately, it comes down to what kind of trade-off you’re willing to make in terms of spending on a big ceremony versus paying the debt off faster.

Bakke gives couples the green light, as long as they’re not going to spend a fortune or rack up more debt just to get hitched. “Unless you’re planning on dropping $20,000 or more on the wedding, I would say go ahead. Student loan debt over $100,000 can really be the tipping point for a couple so if you add in a whole lot more, financial ruin could be around the corner.”

Consider whether a pre-nup is the right move

Pre-nuptial agreements are usually thought of as something only really wealthy people need, but if you’re concerned about how your spouse’s student loan debt could impact you, you may want to give the idea some thought. While you can’t be held legally responsible for loans that were incurred in their name before you were married, the debt could still affect you if you ever end up going your separate ways.

If they were to default on a private loan, for example, the lender could try to attach any assets you own jointly as a couple. Delinquencies could also go against your credit if you ended up co-signing for any of the loans or refinancing them under both your names. A pre-nup allows you to draw a line in the sand, as far as who’s going to be responsible for what but hammering out the details can be a touchy subject.

Couples who find themselves facing student loans do have options for overcoming the hurdles but they have to be realistic about what the debt means. If one of you is in denial about how bad it is or you’re both overwhelmed to the point where you can’t even face it, that’s not going to bode well for your financial future or your marriage. Taking the blinders off is especially important for the spouse who didn’t incur the loans, says Lux.

“Student loans can affect every major life event for someone in their 20s or 30s. For those with large student debt, unless they have a massive income, their lifestyle will be dramatically altered by their debt. Non-debtor spouses should go into a marriage with their eyes wide open to the limitations that student loans will bring to the relationship.”