Survey Says: Millennials Are Saving Money for Travel, Not Enough for Retirement

What are you saving for? We conducted a survey and found Millennials are saving for travel instead of retirement. Is this the right decision? 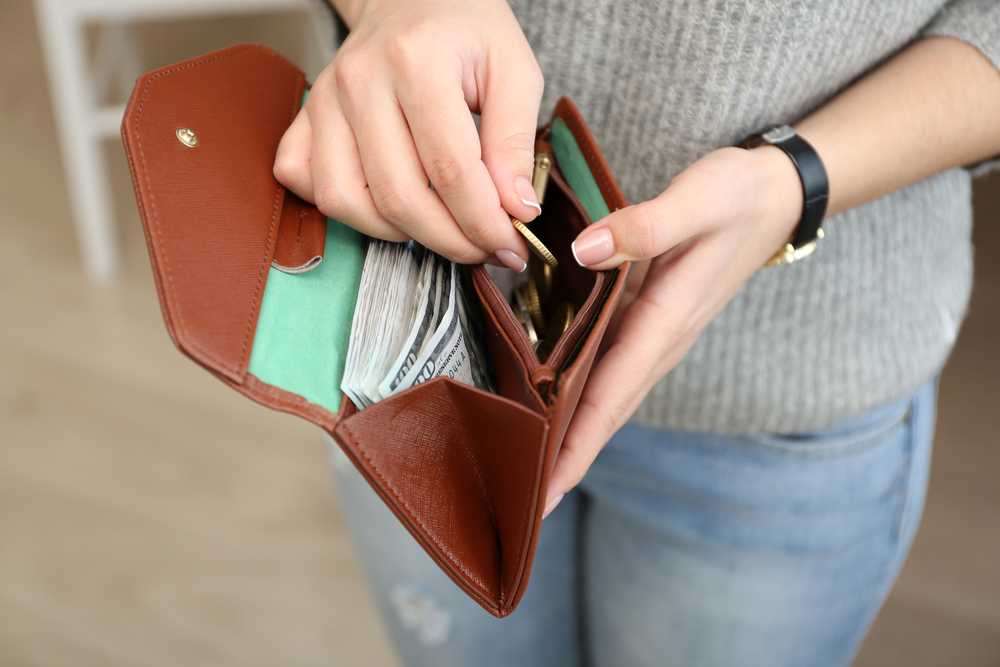 MyBankTracker recently conducted a nationwide survey to determine what Americans are saving for. The results are quite surprising. Although traditional advice tells us to save for retirement and emergencies before ‘luxuries’ such as travel and new gadgets, the survey results indicate that Americans – young Americans especially – are not heeding that advice.

14% of young people are saving for travel

Millennials aren’t going to win any awards for saving. Of those polled, more than 40% of 18 to 24 year-olds say they aren’t saving at all, and almost 33% of 25 to 34 year-olds say the same. At first glance, this may not seem too surprising. Young people are not traditionally as concerned with saving for retirement as their older counterparts. If we look closer, however, we see that millennials are saving, just not for emergency expenses and retirement. More than 14% of survey respondents between the ages of 25 and 34 say they are saving for travel, and 13.1% of those between 18 and 24 make a similar claim. These results indicate a possible change in priorities, rather than a lack of funds or irresponsible behaviors. 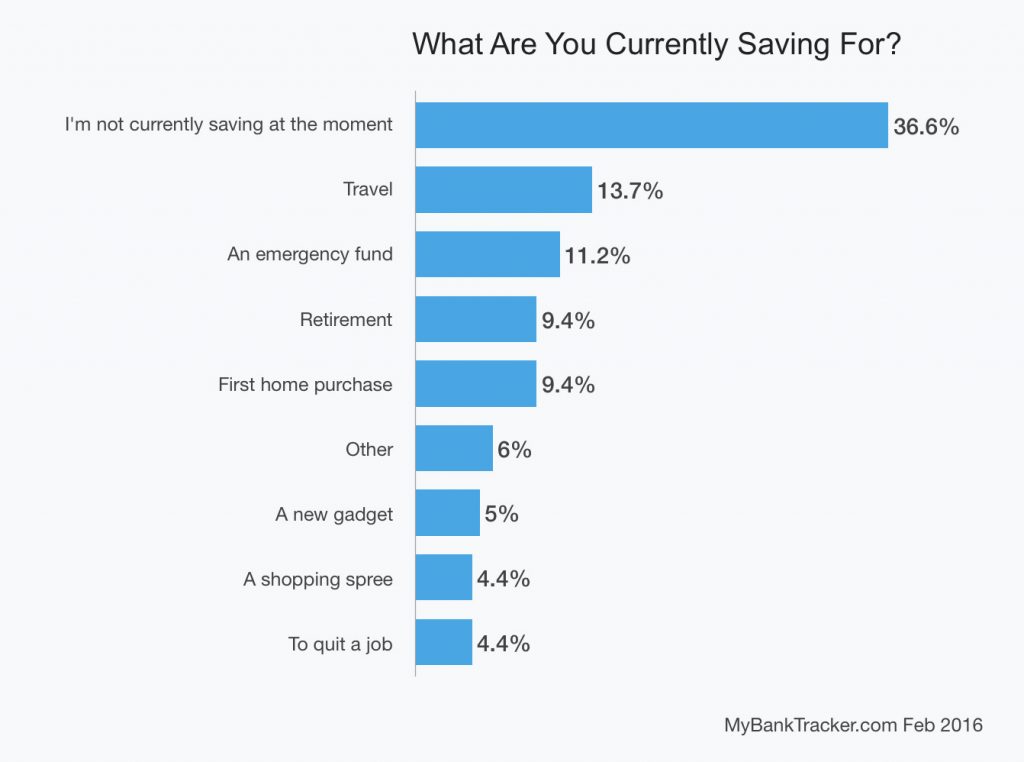 Why aren’t millennials saving for retirement?

Let’s begin by considering the time at which many millennials ‘came of age’ as it relates to work and careers. The Great Recession served as a significant, and sobering, lesson early in many millennials’ careers. It showed how quickly and dramatically the stock market can tank, and how easily a seemingly stable job can disappear from whence it came. Although the recession taught millennials the importance of saving for retirement, many haven’t gotten started yet.

According to a recent Wells Fargo Millennial Study, those surveyed who haven’t begun saving for retirement yet say they plan to start at age 35. “They realize that the earlier they start, the more money they’ll have,” says Wells Fargo’s director of retail retirement, Karen Wimbish. “They won’t have pensions, they will probably live longer, and Social Security might be a smaller part of their retirement income.” According to Wimbish, even though they know the importance, debt and financial constraints make it difficult to save for the future. “For some of them, it’s absolutely crushing,” says Wimbish.

So why are they saving for travel?

Less than half of the millennials surveyed by Wells Fargo believe that the stock market is the best place to invest. Their skepticism may translate to an overall decrease in traditional investments. In addition to a distrust of the stock market, two other factors seem to be at play here; optimism and lower standards. For some reason, young Americans seem to be especially optimistic about their futures. Many believe that their retirement horizon looks better than that of their own parents, even though current statistics don’t support that data. And with the recession shaping financial expectations of many young people, they seem to have lower standards than their gen x and baby boomer counterparts.

The Boston Consulting Group reports that millennials are 23% more interested in traveling abroad than older generations, and according to the United Nations, there has been a 30% increase in annual tourism revenue generated by young people since 2007.

It also seems that many American millennials feel disillusioned by the prospect of waiting until retirement to travel due to their skepticism of retirement planning in general. According to reports by the Center for Retirement Research, the number of private-sector workers with defined-benefit retirement plans dropped by 44 percent between 1995 and 2010. In fact, the number of U.S. companies offering pensions fell from 112,000 in 1985 to less than 23,000 today. Millennials simply don’t have faith in Social Security benefits, company pensions, or the stock market.

It's all about the work-life balance

There is also the overwhelming feeling of dissatisfaction among millennials with this country’s attitude toward work. Basically, we work more and get paid less than our European counterparts. Many employers don’t offer paid annual leave and those that do often max out at two weeks per year. According to a 2013 Gallup poll, only about 30 percent of American workers feel engaged on-the-job. After completing a master’s degree and getting accepted into Ph.D. programs, 26-year-old Jessie Goldstein decided to take a five-month road trip across the country to determine whether she wanted to go back to school. “We’re looking at the corporate world as it is now, and this yester-year of people spending all their life working at a job they often hated, retiring, and that’s it, and we’re disillusioned with that,” said Goldstein. A 2012 Net Impact survey revealed that 88 percent of millennials consider a ‘positive culture’ to be essential. In fact, over half said they would take a 15-percent reduction in pay if it meant they could work for a company with similar values to their own.

It's also about the debt

We’ve established that millennials are less trusting of traditional investing and increasingly concerned with work-life balance. But what about other means of saving? With the lack of pensions, and skepticism surrounding the stock market, there’s still the old ‘cash under the mattress’ option, right? Other methods of saving certainly exist. So why do 40% of millennials polled say they have no savings of which to speak?

Student loan debt has become a way of life for many millennials. As the recession came to an end, millennials were supposed to rapidly increase the rate of homeownership. Instead, the opposite occurred. At the age when previous generations began buying their first homes, the homeownership rate for millennials has dropped dramatically. According to a report published in Freddie Mac’s Insights and Outlook, the decrease in homeownership for folks under the age of 35 is likely due to mounting rates of student debt among the same age group. Why the massive student debt? Well, for starters, many millennials who would have otherwise joined the workforce opted instead to go to college during the recession.

Many hoped that a degree would help them get higher-paying jobs once the recession ended. Unfortunately, that didn’t happen for lots of people. Many young Americans have high student debt and have taken lower-paying jobs than they had anticipated. As such, overwhelming debt has made it challenging for some millennials to save for retirement, qualify for a mortgage, or even get a car loan. In another recent MyBankTracker survey, Americans were asked why they are not currently saving for retirement. The top barrier to saving? Student loan debt. Of the 18-24-year-olds surveyed, 18.6% said that student loan debt was preventing them from saving for retirement.

You can have work-life balance, save for travel, and save for retirement and emergency expenses.

Too many Americans resign themselves to staying in a job they hate for twenty or thirty years, planning to finally enjoy life once they reach retirement age. Unfortunately, putting off happiness often backfires – disabilities, early death, and inadequate retirement savings can put a damper on your senior years.  Even if you live a long, healthy life and save enough for a comfortable retirement, it still seems unhealthy to defer happiness until your golden years. The good news is, you can be happy now and protect your financial future. Follow the tips below to make the most of your time on planet earth.

Whatever your goals, when it comes to saving, something is always better than nothing. Figure out what’s important to you, and then design your life around it. One of the best traits of millennials is their ability to challenge the status quo. We’ve been running on auto-pilot for too long now, and it’s time to shake things up. Millennials are stepping up to the plate. They’re innovating, revolutionizing, and reshaping the global economy. With practice, trial-and-error, and a little guidance, there’s no end to what millennials can accomplish.

This online nationwide survey was conducted by Google Consumer Surveys on behalf of MyBankTracker. A total of 1,002 responses were collected. All respondents were aged 18 to 34.

About the author Amy Carst
Amy Carst writes for MyBankTracker on banking and finance, including retirement, mortgages, real estate investments and credit cards.
Add a comment