How to Fly to Cancun for Free Using Miles and Points

Find out how to earn miles and points toward free award flights to Cancun, Mexico, one of the most popular travel destinations in the world. 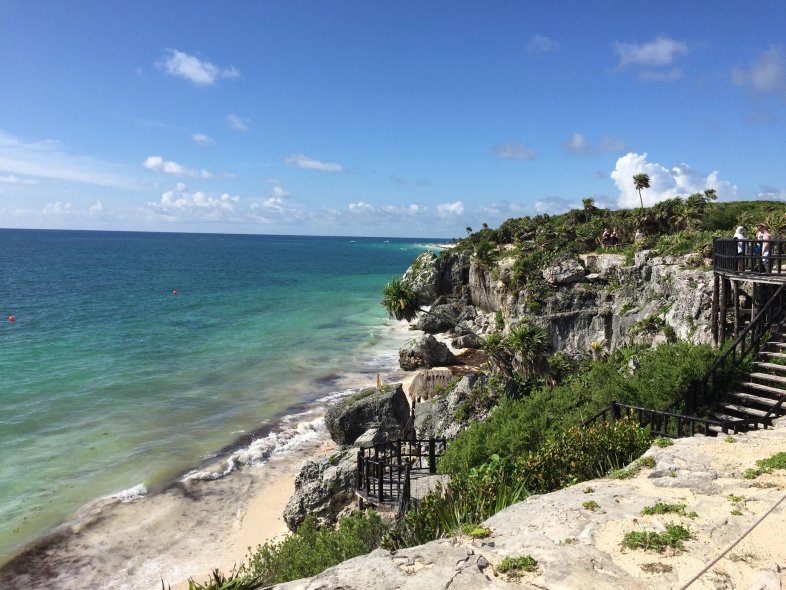 Cancun is the largest city in the Mexican state of Quintana Roo, in the northeast of Mexico. And, it is the biggest and most well-known tourist attraction on the Yucatan peninsula of Mexico.

It is a popular tourist destination for people from North and South America as well as Europe.

In this article, we’ll take a look at some of the various options to use miles and points to fly to Cancun for free.

To start off looking at how to fly to Cancun using miles and points, let’s look at Delta SkyMiles.

Delta flies year-round to Cancun from:

Delta no longer keeps a fixed award chart that lists out specific costs for each region or route.

How much you’ll pay in SkyMiles on an award flight depends on the route, dates, and timing of the flights.

With Delta, more so than with any other airline, it pays to have as much flexibility as possible.

It could cost you anywhere from 12,000 to 40,000 or more Delta SkyMiles for a one-way ticket to Cancun, plus taxes and fees. Delta also offers regular sales on award flights,  if you’re looking to save even more money.

Another option to fly to Cancun is using United MileagePlus miles.

United flies to Cancun from:

All mileage costs don’t include taxes and fees, and you can get a round trip flight for twice the cost.

If you need more United MileagePlus miles, United is a 1:1 partner with Chase Ultimate Rewards points. That can be a great way to top off your MileagePlus balance.

Southwest can be another option to fly to Cancun from much of the US.

Southwest flies year-round to Cancun from:

Flights are available seasonally to Cancun from:

So, to find the cheapest cost using points, you’ll want to be as flexible as possible with your routing and date choices.

Like United, Southwest is also a 1:1 partner with Chase Ultimate Rewards points. That can be a great way to top off your Rapid Rewards point balance.

JetBlue is another option to fly to Cancun for free using miles and points.

JetBlue flies to Cancun from:

Like Southwest, JetBlue’s TrueBlue points are tied to the cash cost of the ticket, so the more flexible you can be with your routing or dates, the cheaper the cost will be.

American Airlines flies to Cancun from:

If sAAver availability is available for your dates and routes, a one way flight from the US to Cancun in economy will cost 15,000 American AAdvantage miles during peak times. Business Class is 25,000 miles one way and First Class costs 50,000 miles one way.

Between April 21 and May 20 and again from September 9 to November 18 are “off-peak” dates with American Airlines.

During those dates, you can fly in economy class for only 12,500 AAdvantage miles.

American Airlines does sometimes offer “Web Economy Specials”. These are a special type of online award that cost less but also come with some restrictions.

Frontier is another option to fly to Cancun for free using miles and points.

They fly to Cancun from:

Because Frontier’s model includes low base fares, they also charge for most other amenities. Expect to pay extra for checked and carry on luggage, seats and in-flight food.

Frontier charges as low as 15,000 Frontier miles (plus taxes and fees) for a one-way flight from the US to Mexico.

Because Frontier’s cash prices are so low, you may be able to find a better deal using cash and then pay for it with flexible points (see below).

Another ULCC airline that flies from the US to Cancun is Spirit Airlines.

Spirit flies directly  to Cancun from:

Like Frontier, Spirit offers a low cash fare and then charges for other amenities. On Spirit, you’ll pay extra for seat choice, checked and carry on luggage and in-flight snacks and food.

Spirit’s award chart is distance-based -- so the amount of miles required to fly to Cancun will vary depending on where you’re flying from.

Spirit’s cash fares are generally quite low, and their mileage program has many fees and restrictions (all Spirit miles expire after only THREE months of inactivity!).

So if you’re planning on flying Spirit, I would recommend using flexible points to book a cash fare with Spirit (again, see below).

Using airline miles like we’ve talked about so far can be an attractive way to fly business class to Cancun.

But if you plan on flying in economy class, you’ll also want to look at the cash fares.

Cash fares from the U.S. to Cancun can be very cheap, especially if you are flying during an off-peak time.

Here’s an example of a round trip flight on American Airlines from Miami to Cancun for only $164.

And just because you’ve found a great cash fare doesn’t mean that you actually have to pay with cash. Some miles and points work as “fixed value” points.

These are points that are always worth the same amount, no matter how you spend them.

Another way that you can use miles and points to book a cash ticket like this involves The Business Platinum Card® from American Express (see Rates & Fees; terms apply).

You can always use your American Express Membership Rewards points to book flights through Amex Travel, with a value of 1 cent per point. One of the special perks of The Business Platinum Card is that for economy flights on your chosen airline you receive a 35% rebate of your points (up to 500,000 points back per calendar year).

Continuing with the example, you would pay 16,400 Membership Rewards points for the American Airlines flight to Cancun.

Other Options to Fly to Cancun With Miles and Points

There are a couple of other mileage programs that you might use to fly to Cancun for free using miles and points:

Alaska Airlines does offer one seasonal direct flight from Seattle to Cancun.

British Airways does not fly directly from the U.S. to Cancun, but is a oneworld alliance partner with American Airlines.

British Airways has a distance-based award chart. This means that within North America, flights under 1151 flown miles only cost 7500 Avios.

Flights between 1152 and 2000 flown miles (which covers most of the U.S.) cost 10,000 Avios one-way, plus taxes and fees. British Airways Avios are a 1:1 transfer partner of Chase Ultimate Rewards

The easiest way to get a lot of credit card points and miles is through credit card welcome bonuses. Here are a few cards that can give you airline miles:

Some other cards give bank-issued points.

With those, you can use them as fixed value points on a cash ticket or transfer them to airline partners.

Here are a few cards that give bank-issued points:

Hopefully, these tips will help you as you look to plan your next trip to Cancun for free with miles and points!