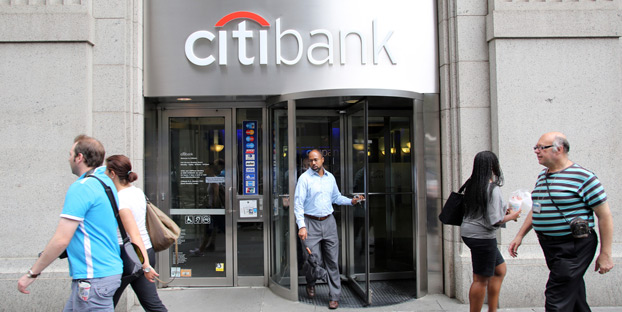 If you're like me, you probably question why banks do some of the things they do.

From annoying fees to policies that seem completely pointless, a lot of it just doesn't make sense.

However, some misconceptions about banking are costing you money.

So today, I'm busting four costly banking myths that every smart consumer should stop buying into.

1. Switching Banks is Just Too Much Work

When you're stuck paying high fees every month or you're looking for a better interest rate on your savings, moving your accounts to a different bank is usually the best option.

In fact, a BancVue survey found that nearly half of Americans would switch to snag a better rate and 20 percent would do so to pay fewer fees.

Interestingly enough, however, that same survey found that 70 percent of respondents had never switched banks.

The reason? Overwhelmingly, people think it's just too much work.

After all, you've got to transfer your direct deposits over, reroute your automatic bill payments, wait for a new debit card.

I mean, who needs all that hassle?

The reality is that switching banks isn't as painful as you think.

Many banks now offer switch kits that let you make the change just by filling out a few forms.

The last time I made the switch I went from paying $30 a month in fees to paying zero, which means I'm saving almost $400 a year.

That's a pretty decent amount of savings, considering it took me only a couple of hours to set up my new accounts and update my payment information.

Tip: Double-check to make sure your old account is closed once you make the switch. An automatic deposit or bill payment could re-open it, potentially triggering overdraft or monthly maintenance fees.

2. All Banks Charge the Same Fees

Bank fees. We all hate them, but there's no way to get around them, right?

This is one of the most expensive myths people buy into, but the truth is, you don't have to shell out hundreds of dollars in fees each year.

If your brick-and-mortar bank is dipping into your pockets each month for things like minimum balance fees or ATM fees, moving to an online or mobile-only bank is the answer.

Moving to an online bank can even put money back in your hands if you choose an interest-bearing checking account.

The point is, unless you're comfortable having the bank on your payroll, there's no reason to settle for paying more in fees than you have to.

3. Overdraft Protection is the Only Way to Avoid Fees

Out of all the fees banks charge, overdraft is the one that ticks people off the most.

A report from the Consumer Financial Protection Bureau found that banking customers who "opted-in" paid an average of $21.61 a month in overdraft and insufficient funds fees.

Kind of blows that whole "overdraft-protection-saves-you-money" theory out of the water.

There are other ways to avoid overdraft fees that won't cost you a dime.

Again, I'm a big fan of switching to a fee-free online bank if you're comfortable leaving your brick-and-mortar bank behind.

Linking your checking account to your savings account (called Overdraft Protection Transfer) for easy transfers is a way to lessen hefty fees if you slip-up and run your balance into the negative.

Many banks and credit unions still charge a fee for this, but it's usually considerably less than an overdraft fee.

Tip: Link your accounts to budgeting apps so you can check your balances all in one place and receive alerts when you're running low on funds.

4. I can't Join a Credit Union

Credit unions are misunderstood for the most part and they often get assigned the role of playing second fiddle to banks.

Two things people tend to get wrong the most about credit unions is that it's harder to open an account and they're more expensive.

While some credit unions may limit their membership to people who work in a particular field or live in a specific geographic area, most of them open their doors to anyone.

As far as the cost goes, credit unions don't operate on a for-profit basis, unlike banks.

Whether you're looking to set up a CD ladder or stash your emergency fund in a money market account, your local credit union is definitely worth a look if you want to get the most bang for your buck.

Take action now to save more

Giving the bank more money than you need to is just plain dumb but that's exactly what you'll end up doing if you buy into these myths.

Even if it's just a few dollars a month, that can add up to hundreds or even thousands of dollars over your lifetime that you could be using to save, invest or pay down debt.

If you've been letting these banking lies trip you up, today's the day to shake off the blinders for good.

If fees are the biggest issue, move to an online bank.

If you can't give up the convenience of having a branch you can visit in-person, check out your credit union options instead.

The sooner you take control of your banking destiny, the more money you stand to save.