How Many Overdraft Fees Can Your Bank Charge You In One Day?

Overdraft fees equal big money for banks and if you get hit with more than one in a day, it can put your account even deeper in the red. 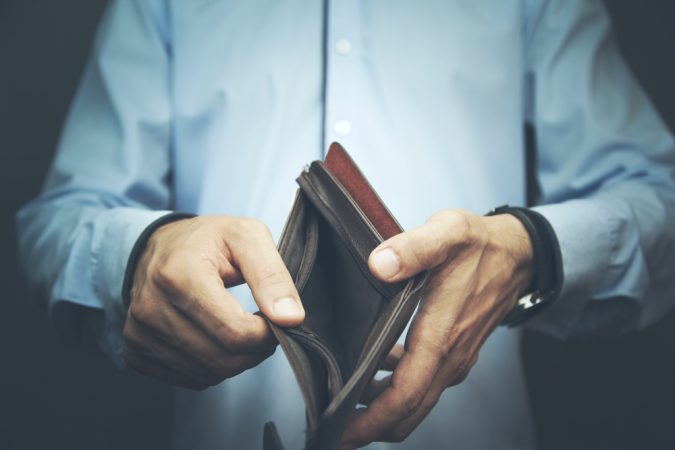 Overdraft fees are one of the most annoying charges bank customers face, especially if you get hit with more than one at a time.

If you've ever run your checking account into the red by mistake, you know how expensive overdraft fees can be. In fact, overdraft is one of the highest fees banks charge and they cost consumers over $30 billion.

Aside from the fact that these fees tend to be so costly, the other thing that makes them so burdensome is that banks can charge you more than one in a single day.

If you have multiple transactions that end up getting returned for insufficient funds, the overdraft fees can put you in an even deeper hole.

Tip: Switching to an online bank may reduce the amount you pay for overdraft fees, and all other typical banking fees.

Sidestepping the fees is a little easier if you understand how they're applied. MyBankTracker took a look at just how many overdraft fees banks can charge you in one day, and how the best way to get around them.

How Are Transactions Processed?

Common sense would tell you that banks would process and post transactions to your checking account in the order that they occur -- but in reality, that's typically not how it works.

In fact, many banks routinely reorder debit transactions based on the amount, rather than the date on which it occurred.

This can be done low to high or high to low and the way the bank chooses to do it ultimately determines whether or not a customer incurs an overdraft fee.

The most common argument banks use in favor of this practice is that it ensures that customer's largest expenses, such as a mortgage or car payment, get paid ahead of smaller debits.

A study of major banks conducted by Pew Charitable Trusts found that half of them actively engage in high to low reordering.

Among big banks, Bank of America, Wells Fargo and Chase have a “limited reordering” rule, which means they generally don't reorder debit card purchases or ATM withdrawals, but checks may still be posted high to low.

You should also keep in mind that reordering rules may also apply when you're putting money into your account, not just taking it out.

If you make a large deposit in the morning and a smaller one in the afternoon before the daily posting cutoff time, there's no guarantee that the larger deposit will hit your account first.

If you're counting on a check you deposit to post by a certain date and the bank credits the smaller one to your account first, there's a good chance you could end up in overdraft.

Tip: Big banks typically waive the overdraft fee on transactions that are less than $5.

If multiple charges to your account get returned for insufficient funds, the bank can apply an overdraft fee to all of them, up to the daily limit.

The maximum number of overdraft fees you can be charged in a single day varies from one bank to another.

At SunTrust, for instance, you can be charged a maximum of six $36 overdraft fees in a single day.

The returned item fee is a separate fee the bank charges when a transaction goes unpaid because your account is overdrawn.

At the other end of the spectrum, Chase limits the total number of overdraft and returned item fees they charge in a day to three.

On top of the daily overdraft charges, banks can also impose an extended overdraft fee if your account remains overdrawn for a certain number of days consecutively.

The fee may be the same as the regular overdraft fee, although some major banks charge less.

Typically, you have between five and 10 days before the extended overdraft fee is applied.

Some banks only charge the fee once but at PNC Bank, the fee is $7 a day after the first five business days have passed, up to a maximum of $98.

Some banks are worse than others when it comes to how high their overdraft fees are and how many of them they can stick with you in a day.

To give you an idea of how overdraft fees compare at different banks, we've included a breakdown of what some of the top U.S. banks charge:

*The total charged per day calculation is if the bank charges you the maximum amount of daily overdraft fees, excluding the extended overdraft fee.

Should You Take Advantage of Overdraft Services?

Aside from paying attention to your account balance and keeping track of when money's going in and out, you have the option of getting overdraft services on your account.

Banks typically offer a few different choices and the plan you choose determines whether you end up paying overdraft fees.

At SunTrust for example, you have three options:

At the coverage level, the bank allows your transactions to go through and you agree to be charged the $36 overdraft fee on items that get returned.

You have to specifically opt-in to overdraft coverage; otherwise, debit transactions that would put your account in the negative, would be simply be denied.

If you go with overdraft protection, your checking and savings account would be linked and any time you go over, SunTrust automatically transfers money from one account to the other to cover it.

You don't pay an overdraft fee, but there's a $12.50 charge that applies every time there's a transfer.

Overdraft Assurance is a line of credit that's linked to your checking account that you can use to cover the gap until a deposit goes through.

There's a $7 monthly fee for the service and if you don't repay the money within three days, the bank charges you interest.

Tip: Avoid using your debit card at gas stations, hotels or anywhere else that puts a "hold" on funds in your account, since this could affect your available balance and trigger an overdraft.

While signing up for automatic transfers or an overdraft line of credit can help you to avoid the overdraft fees, you're still going to pay a price for these services.

The simplest solution if you're trying to avoid an overdraft fee is to not opt-in to any of these services, which would prevent any transactions from going through when you don't have the cash to cover them.

Signing up for direct deposit through your employer ensures that your paycheck hits your account on time, which makes it easier to plan ahead for bill payments and any automatic drafts you've got set up.

If that's not an option, you could set up recurring transfers from your savings account to cover the gap until you get paid.

Finally, you can sync up your checking through Mint, which will keep tabs on your bill due dates and balances and send out alerts when one of your accounts is getting low.

<p>Overdraft allowance is a contractual agreement between the bank and a customer that authorizes customers to overdraw the balance in their accounts by any amount entirely assumed by the bank. Overdraft protection is an altered form of overdraft allowance that authorizes a customer to overdraw their checking account using the funds in their savings account to cover their transactions that exceed the amount of available funds in their checking, and therefore, entirely assumed by the customer. Whoo whoo!I</p><p>STILL! Is a bank allowed to complete a transaction, using its own money, whenever the balance in my savings account is too low to cover my spending?</p><p>Since a bank would otherwise decline such transactions, it appears that overdraft protection subjects me to overdraft fees.</p>

<p>No, you get a $36 fee for each item (up to 4 daily) presented against your account, once your account is in the negative. After that, you have 5 business days to correct a deficit balance. If you don't you then receive the daily $7 charge. The daily charge is the penalty for allowing your account to sit there in the negative.</p>

<p>Unfortunately, that is the typical overdraft-fee policy.</p>

<p>SO WHAT YOUR SAYING IS THAT PNC CAN CHARGE ME 36.00 FOR AN OVERDRAFT AND THEN 7.00 A DAY ON THAT SAME ITEM AND THIS IS LEGAL? SOUNDS LIKE DOUBLE DIPPING TO ME!</p>

<p>This happened to me at PNC last December. I was able to reduce the fees but they gouged me good. Problem is, even credit unions now do this to you. There are many choices, yet the industry is nasty by nature.</p>

<p>the electronic part is important, because the check has to be "returned." If it is returned electronically, this is the rub.</p>

<p>I'm not completely sure, but if your current bank's policy for daily overdraft limits are 4, they can say (and it can honestly happen this way because of the Check 21 Act, which enables banks (on both sides) to turn a paper check into an electronic check) that the drafting bank attempted 4 times to retrieve their funds.</p>

<p>I was just told our bank can and will charge a overdraft fee for the same check up to 4 times in one day!!! Is that legal?</p>