Free first-class ticket upgrades from basic economy class can mean hundreds of dollars in savings. See how you can get your airline to upgrade your seat. 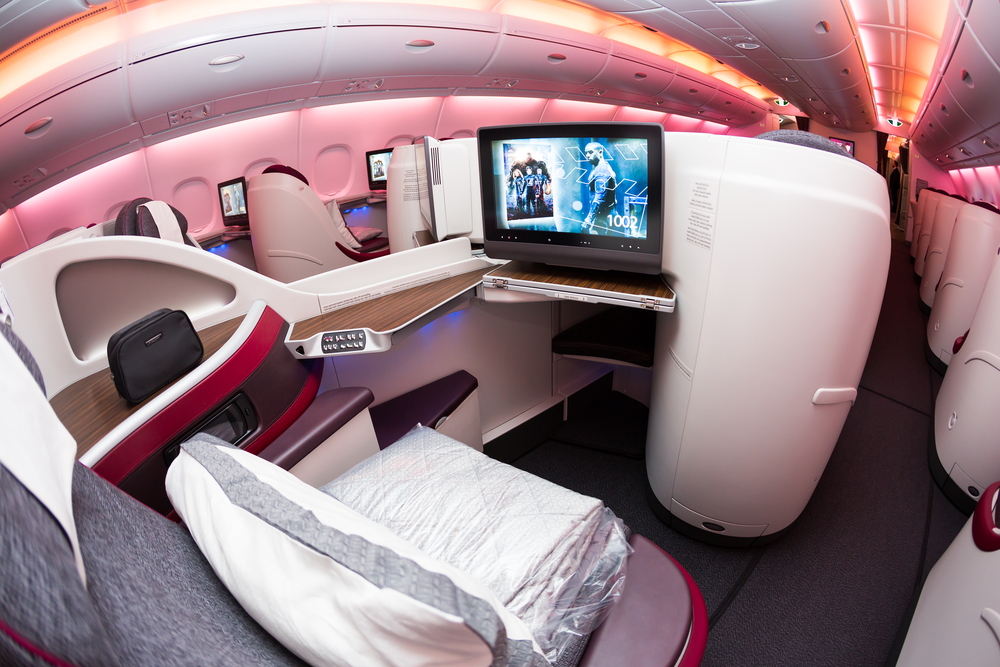 The majority of people fly coach, but a small percentage of the population enjoy first-class accommodations on airplanes.

These premium seats cost a pretty penny, however, and are beyond the budget of the average American household.

But every once in awhile a lucky traveler gets a first-class ticket dropped in their lap.

The question is, how often does it happen - and how?

In the hopes of helping other people replicate this success, we decided to dig deeper to find the answers to these questions.

In MyBankTracker's survey of more than 3,000 people, we found that 27% have been upgraded to first-class.

Here's how they did it: 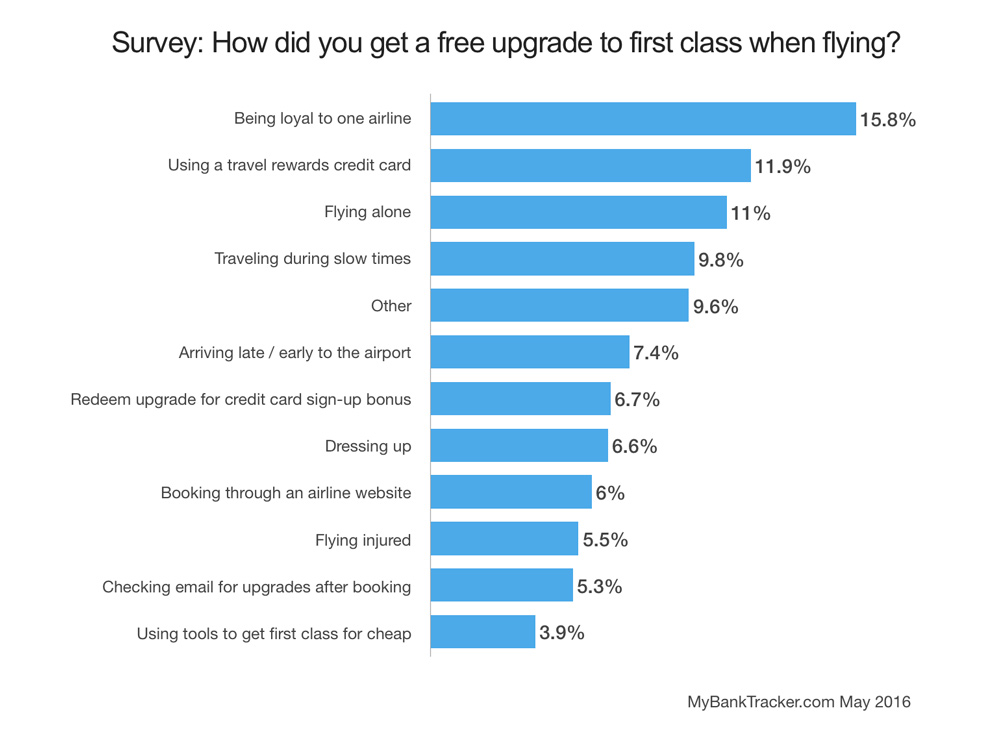 1. Be Loyal to One Airline

The typical thought process is to sign up for every frequent flier or loyalty program in hopes of saving money across the board.

“I am Diamond Medallion on Delta,” says comedian Dan Nainan, who flies over 200,000 miles per year. “I get upgraded on every single flight. Like some airlines, Delta will start upgrading you for free once you fly 25,000 miles a year and achieve Silver status.”

So instead of being a frequent flier member who only racks up a handful of miles on any individual airline, focus all of your efforts on being loyal to one airline.

The tickets may cost a little more every so often, but the long-term benefits of stockpiling miles for one company can upgrade your travel to first class.

Here is some basic information on the elite traveler statuses from the six largest U.S. airlines that make it so passengers more likely to become eligible for first-class upgrades:

Airlines recommend arriving at the airport and checking in at least 30-60 minutes before a flight (longer for larger international airports).

This is because it takes the time to check baggage, pass through security, and arrive at the departure gate.

However, showing up early allows you time to have a casual chat with the gate agent without a large crowd.

This is the time where you can build a rapport and ask about an upgrade to first class without other people around whom the airline risks upsetting.

Flights are often overbooked, and by arriving late (though don’t arrive too late), you’ll probably be bumped to a later flight, at which time you can ask for a first class upgrade to make up for the inconvenience.

Instead of flying near the holidays and weekends with everyone else, book your flights at the right time -- such as in the middle of the week.

FareCompare, an airline tracking website, points out the most unpopular days to fly are Tuesday, Wednesday, and Saturday, while dawn, dusk, and red-eye flights are the least popular.

These are the flights that are most likely to have empty seats, meaning there’s availability in first class.

For example, a flight on Thanksgiving Day is much more likely to have availability than flights on the Wednesday prior or Friday after.

This, of course, assumes overbooked passengers from previous flights haven’t already filled up the plane.

- The period between Thanksgiving weekend and the week of Christmas.

Why: Fewer people choose to travel between the two major holidays.

- The period in January after New Year’s week.

Why: With the new year rolling in, Americans travel less as they return to work after two major holidays (Christmas and New Year’s).

Why: The popular summer season comes to an end and school starts.

Why: School is in session and summer prices haven’t kicked in yet.

In addition to picking travel times that have cheaper airfare, travelers can also minimize their travel costs by booking at the right time for the cheapest flights.

The best time to book the cheapest flights is on Tuesday at 3 p.m., when airlines tend to introduce sales.

Travel booking sites like Kayak, Travelocity, Hotwire, and Expedia seek out the lowest possible rates, which has made profit margins for airlines and hotels smaller.

While these sites make searching for flights and comparing prices easy, don’t use them for the final booking.

Instead, after determining which flight is the cheapest bet, log-in to that airline’s official website and book the flight directly through them.

This shows up on their system when checking in, and you’ll be treated as a loyal customer who appreciated the airline’s marketing as opposed to just another value shopper booking through a discount digital travel agent.

After booking your flight, keep an eye on your emails. The airline will know ahead of time whether the flight is overbooked, and will offer more and more aggressive discounts to those wishing to upgrade to first class via email.

Of course, the airline is unable to email customers who used a third-party travel booking site, so you’ll be one of a small minority of people receiving these emails for your specific flight.

Regardless of who sits here, the airline has to take off on a set schedule, so the closer an overbooked flight gets to departure time, the more drastic discounts are applied to first-class upgrades.

6. Use a Travel Rewards Card

Travel rewards credit cards are a great way to stockpile frequent flier miles without necessarily having to travel.

Here are a few of the best travel rewards cards on the market:

With the earn 2 miles for any airline per dollar spent on any purchase, with a $95 annual fee.

With , you can earn plenty of rewards points if you travel and dine out regularly.

Notably, points are worth 25 percent more if booked through the Chase Ultimate Rewards portal.

Earn 1.5 miles per dollar spent, which are doubled at the end of the first year for no annual fee.  In addition, receive an annual $30 in-flight Wi-Fi credit and enjoy no blackout dates as points are tracked in-house by Discover, not any particular airline.

Upgrading a single ticket is much easier than upgrading tickets for a family of 4. If you’re traveling with your family, your best bet is to work together to decide who should be upgraded to first class on each trip, rotating who gets the seat on each trip like a nonviolent Game of Thrones.

8. Fly Crippled or on Your Birthday

Always remember that pilots, flight attendants, and the gate agent are all people just like you and I.

A friendly conversation goes a long way, especially when mentioning special occasions like your birthday being today, or how the cast on your leg has given you a newfound respect for people with disabilities.

“On a recent trip to Hong Kong, we were upgraded to 1st class thanks to our charm,” says John Heaton, Managing Director at The Heaton Group. “This can also work if it’s your birthday, honeymoon or anniversary. You won’t be upgraded for no reason so make sure you let them know you have a genuine reason to be upgraded and with a bit of luck, they’ll be listening.”

Many frequent flyer programs allow members to redeem their miles for free flights. Furthermore, members can also use the miles just to upgrade their tickets to first class.

In the same way that people use credit card sign-up bonus miles for free flights, you can use them for first-class upgrades as well.

A typical travel rewards credit card will offer bonus miles worth hundreds of dollars after certain spending requirements are met.

Furthermore, the points can be transferred to various airline partners and used for first-class upgrades (cost will vary depending on the flight).

A professional look with a nice smile can go a long way to convincing airlines to upgrade your ticket class.

Someone dress in a suit or business casual attire is more likely to receive an upgrade than someone who is wearing a T-shirt and cargo pants.

11. Use the right tools to get first-class on the cheap

With the help of tools such as Google Flights, you search and compare the cost of flights.

Although it may be difficult to find, there are first-class tickets that cost the same or nearly as much as economy class tickets.

This nationwide, online survey was conducted by Google Consumer Surveys on behalf of MyBankTracker. The survey received 3,016 responses and all respondents were age 18 or older. 51.4% of respondents were male while 48.6% were female.